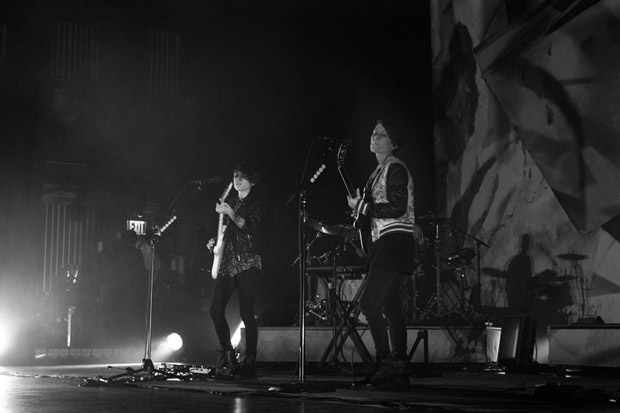 Click here for QRO’s review of Tegan & Sara at The National in Richmond, VA on February 18th, 2010

“Oh, Tegan & Sara?” the claims-to-be-jaded hipster says, “They’re those political Canadian lesbian twins who sing songs about break-ups for teenage girls – like Indigo Girls for the next generation…”

Forget whatever you think people know about Tegan & Sara.  The crowd at their live shows isn’t just teenage girls.  Their on-stage banter is infectious and hilarious.  Yes, they are a pair of Canadian lesbian twins, and yes Heartthrob has some killer dance tunes, but the pair run the gamut from electro-pop to heartfelt acoustic, like two nights at New York’s Beacon Theatre (QRO venue review) on Tuesday & Wednesday, February 19th & 20th.

The two dates had actually been moved from late January, right on the release of Heartthrob, after Sara Quin came down sick, something Sara apologized for, but told the crowd that they were getting a way better set (she thanked the people on the floor of Beacon, then the people in the balconies – then mentioned how the people on the floor were pissed when she mentioned the people on the balcony…).  And Tegan told the crowd that she had spent that downtime checking twitter for reactions to the release of the new record.  That was only one of the many times one or both made the crowd laugh with their killer commentary throughout Wednesday night:

Tegan talked about ‘90s rave clothing coming back, how she & Sara had been ravers (“We were those people”), and asked if anyone in the crowd had been (“Just the people with the glowsticks…”):

Sara talked about her reoccurring work anxiety dream, of playing a show in a large theater with some kind of opulence like Beacon (“It’s very detailed, my dreams”), and people are streaming out – and thanked the crowd for not making her nightmare a reality:

Tegan promised something special coming up, driving Sara mental – she compared Tegan to the ‘Next time on…’ spoilers at the end of TV episode cliffhangers:

Tegan said the first tweet she read about Heartthrob called her favorite song, “Love They Say”, cheesy – but then was told that it’d be played at people’s weddings (but only gay weddings…):

Tegan talked about playing a seated theatre (like Beacon) in Edmonton, where ushers kept forcing people to sit, until the entire crowd stood – with their eyes closed:

And there was much more, about playing older songs (Sara – “These aren’t so much old as tried & true…”), Sara rejoicing at her chance to dance with guitarist/keyboardist Ted Gowans for “Alligator” (so much so that she missed her cue & had to start again – her second favorite thing to do…), Sara imagining Beyoncé giving her a pep-talk for “Now I’m All Messed Up”, Tegan introducing their handsome male bandmates & worried the guys would attract too many people (“We’re just gonna have to beat them off…”) – there was even a joke about opener Diana, and how no one in that band is named Diana (however, Diana had made that joke earlier, so it didn’t go over that well, which was pointed out…). 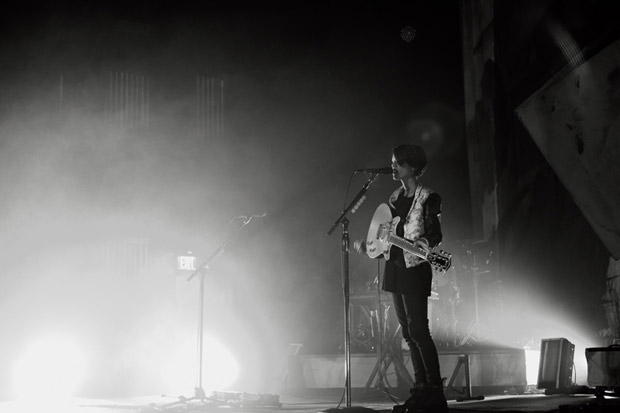 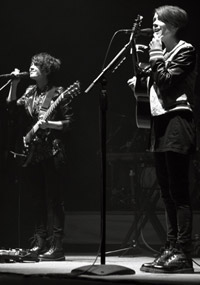 Oh, yeah, Tegan & Sara also played a whole bunch of songs.  As the start of a tour on the just-released Heartthrob, they naturally played a lot from it – in fact, all ten tracks.  But there was also a lot of “tried & true” songs, from prior record Sainthood (QRO review), 2007 breakthrough The Con, and earlier.  There were of course a heavy helping of The Con, while Sainthood got a bit of a short shrift – but for any band with more than two albums, the most-recent-but-one record gets shorted.  The evening started with “Drove Me Wild” and (ironically) “Goodbye, Goodbye” from Heartthrob, before going into the past with such great pieces as “Arrow” (Sainthood), “Back In Your Head” (The Con’s amazing single), and “Walking With a Ghost” (2004’s So Jealous).  There was also a (relatively) acoustic portion in the middle, where Tegan & Sara mostly worked without their handsome backing band, both with Heartthrob songs, older songs, and even their cover of “When You Were Mine” (originally by Prince, but made famous by Cindi Lauper – to whom it was dedicated, and was in the house that night, “Unless she slipped out the back…”).

Interestingly, Tegan & Sara went into their encore break with Heartthrob’s own killer single, “Closer”, instead of ending the night with it (maybe they just didn’t want the closer to be “Closer”… [note: not the same word, and is pronounced differently]).  And for their encore return, they managed to wedge in more old stuff by doing a medley of six songs, reaching back to 2000’s This Business Art.  The evening actually ended with “Feel It In My Bones”, their single with DJ extraordinaire Tïesto (QRO live review), which was unsurprisingly electro, but surprisingly heartfelt. 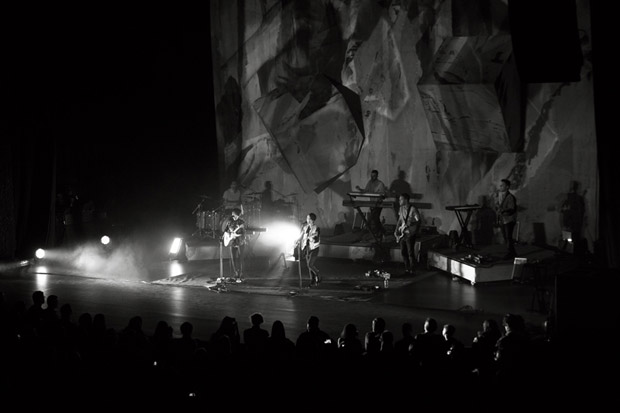 There are a lot of misconceptions about Tegan & Sara, but they’re not so much wrong as incomplete.  Yes, they have emotional acoustic songs – but they also have upbeat electro ones (or vice-versa).  Yes, teenage girls love them – but there were also a lot of fans of drinking age (getting Beacon’s high-priced drinks) and/or with penises at the show.  Yes, they speak out for causes like gay marriage and Cindi Lauper – but also for nineties raver clothes & standing at seated venues.  Yes, they love their fans – but also joke with them.  Yes, they’re a great band. 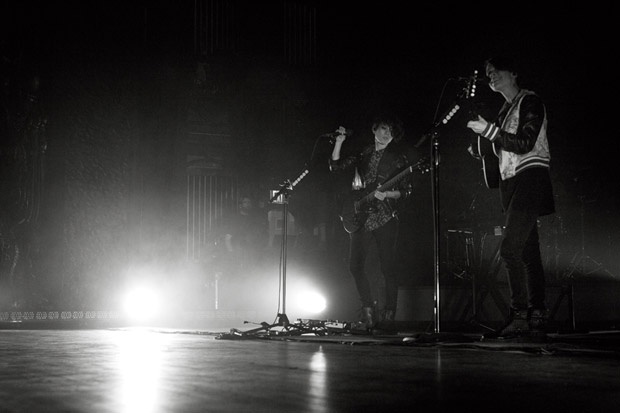