Many bands have tried to emulate the ‘60s psychedelia, but only a few have managed to succeed as well as The Black Angels.... 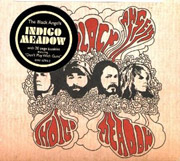 Many bands have tried to emulate the ‘60s psychedelia, but only a few have managed to succeed as well as The Black Angels.  What makes them so special is that they’ve incorporated all the types of psychedelic sonorities into their own distinctive style without ever sounding formulaic.  Their secret lies in taking the whole business quite seriously to the point of curating an annual Psych Festival in their hometown Austin, TX, which in only six years has grown so much that plans for a French and an Australian editions are in the making.

Their fourth album Indigo Meadow doesn’t quite represent an evolution, as it revolves around the same formula of noisy, heavily reverbed guitars, dark analogue organ sound, and constant sense of menace and suspense, but somehow it’s the band’s most consistent album as yet: John Congleton’s production feels more polished, less abrasive, the songs are shorter and catchier, the instruments, organ in particular, stand out more.

Starting with stomping drums and menacing organ, title track “Indigo Meadow” is the perfect opener with its drive and urge to draw you in.  Follows second single “Evil Things”, built around an ominous guitar riff, backed by thunderous drums and sinewy bass that go up and up till the final mind-blowing climax, while telling of a man and woman on opposite sides of a conflict who meet on a war-torn battlefield.

Based on a bass-heavy rhythm and riotous organ, prophetically penned only a few days before the Aurora cinema shooting, lead track “Don’t Play With Guns” is an attack to the American gun culture and how people can easily lose control.  Things calm down a bit with the beautiful, eerie “Holland”:  dark and melancholic like the early Brian Jonestown Massacre, the song is built around a hypnotic organ melody echoed by reverbed, wandering guitar and bass lines.

Though at first the strongest, leading tunes seem to be concentrated at the beginning of the record, it’s in the second half that you can find some little gems which will grow on you after a few listens: with its imperious one bar guitar sequence, “The Day” is reminiscent of The Kinks as well as The Beatles, while “Love Me Forever” immerges you in a psychedelic, Doors-esque dream; “War On Holiday” is as powerful as catchy with its splashing of tambourine; “Always Maybe” features haunted rhythms and a vocal delivery made sinister by the tremolo effect in frontman Alex Maas’ (QRO interview) voice; the marching “Broken Soldier” tells of a veteran struggling to get back to normality (“I want to feel safe closing my eyes with you”) while criticizing the purpose of being at war (“It’s hard to kill when you don’t know whose side you’re on”).

The trippy “I Hear Colors (Chromaesthesia)” sings about the ability to “hear” colors, referencing to the hallucinatory music era it’s meant to invoke, a classic that brings back to the early The Black Angels.  Follow the warping, reverb-saturated melodies and abrasive riffs of “Twisted Light”, co-sung by Maas and guitarist Christian Bland, and by contrast “You’re mine”, one of the band’s sunniest, poppiest tune built around love-absorbed lyrics.  The subtle, dark groove of “Black Isn’t Black” perfectly draws things to a close.

The Black Angels never disappoint.  Indigo Meadow is magnificent in all its songs, instrumentations and small details.  Lets just hope they will carry on like this forever.

Jack Daniel’s ‘Live at the Landmark’