<img src="http://www.qromag.com/wp-content/uploads/2008/11/theasteroidsgalaxytournov21.jpg" alt=" " />The Asteroids Galaxy Tour sparked up the night on their first-ever visit to the ol' U.S.-of-A. ... 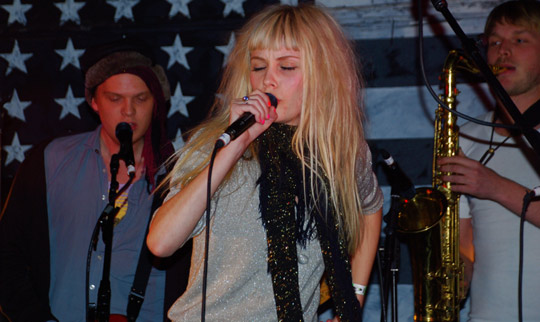 Click here for photos of The Asteroids Galaxy Tour at SXSW 2009 in Austin, TX in the QRO Concert Photo Gallery

On their first-ever visit to the States, Denmark’s Asteroids Galaxy Tour played a fun, charming and relaxed show.  Best known for having their first single “Around the Bend” used in an iPod commercial (hey, that’s how Feist – QRO live review – got to her current mega-star status…), the Danish duo-becomes-collective only have one other single, “The Sun Ain’t Shining No More”, currently to their name, but still played to a packed Studio @ Webster Hall (QRO venue review).  Of course, it was part of a giant dance party thrown by promoters GBH (better known for their free Thursday night shows at Hiro Ballroom – QRO venue review – where free beers are promised in the first hour but you’re lucky to get a 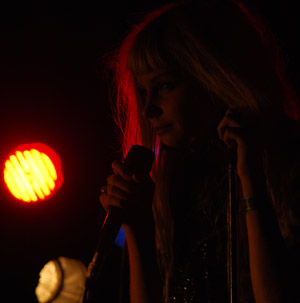 single one…) on all three floors of Webster Hall, including DJ’s Switch and Grandmaster Flash.  But The Asteroids Galaxy Tour made it their own.

Live, The Asteroids’ biggest hook is the cute and charming lead singer Mette Lindberg.  Along with bassist/keyboardist Lars Iversen, she founded the band, and is still in many ways the metropole around which it orbits.  Her full head of Scandinavian-blonde hair (which seems larger than her tiny little frame) provided a sunny center to the band’s sunny riffs on stage – though she should think twice about wearing those sunglasses, which make her seem to think she’s hotter than she really is (thankfully, she dropped them after the first song).

Lindberg’s voice is likewise central to The Asteroids’ bright, laid-back riffs, which upswing like “ska for people who don’t like ska anymore” (actual quote heard from amongst the crowd).  Not too dance-tronic, not too ska-pep, not too reggae-relax, the band nicely straddled a bunch of lines.  Sometimes they could get a little sloppy (like on the slightly sleazy new piece “about staying inside, hiding from the sun”), but there was an inner fun-time energy on “Bend” and “Shining” to match its catch.  And they ended with some grooving slow hepsteppers, including “Shining” b-side “Bad Fever” and finisher “Push the Envelope”.

Admittedly, it wasn’t exactly the right time of year for the warm group (then again, Denmark ain’t exactly in the tropics…).  And playing a big GBH show at Webster Hall (QRO venue review) invited the venue’s regular, non-Bowery Presents, decidedly disco-dance party crowd, though the sub-location within Webster Hall did make it more of an interesting (if older) mix of concert-goers.  But it was The Asteroids Galaxy Tour that charmed and delighted late on a cold winter’s night in November.

Morel : The Death Of The Paperboy