The Boxer Rebellion : The Cold Still 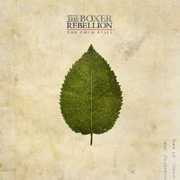 In Our Dumb World by satirical newspaper The Onion, the headline for The United Kingdom was, “Surging Ahead to the Nineteenth Century”, and it went on to mock Great Britain mostly for having lost its empire, along with the usual jokes about their bad teeth and soccer hooligans (could have been worse: Portugal’s headline dipped back even further into the past, “Still Searching For India”…).  All kidding aside, there is something often tragic about England, from the rainy weather to its monuments of forgotten glory.  While a few bands tap into the larger historical aspect of this (such as British Sea Power – QRO spotlight on), most go the intensely personal route with the sadness.  And doing that particularly well is London’s own Boxer Rebellion on their third release, The Cold Still.

The tension on Still isn’t between happy or sad, or between large or small, but in slow or pressing.  “Step Out of the Car” and “The Runner” are great road-press pieces that don’t overdo the gas pedal, but rather turn the sadness of the record into action.  So strong, in fact, that one does wish The Boxer Rebellion had done more in that vein, as was their wont on prior release Union (QRO review), but there are still a number of strong slow pieces on Still.  Opener “No Harm” has an echoing stripped evocation that’s powerful even before the rest of the record gets to you, while “Memo” brings a more epic expanse-loss, and “Locked In the Basement” is reminiscent of the very fine “Dream Thrum” almost twenty years ago from James (QRO spotlight on).  Not all of the slow and sad songs are as memorable, but Still never gets weak (and there is at least one piece that goes into the light, the march upward and onward “Organ Song”).

Click here for photos of The Boxer Rebellion at SXSW 2011 in Austin, TX in the QRO Concert Photo Gallery

Click here for QRO’s review of The Boxer Rebellion at Mercury Lounge in New York, NY on April 24th, 2009

The Boxer Rebellion had their own, if not tragic, then at least mixed history, from winning a slot at Glastonbury in 2003 to their label folding before they could release their record.  Their digitally self-released sophomore effort, Union, sold enough copies online to make the Billboard charts in the U.K., but not officially, as there was no physical copy (Billboard made it up to the band by booking them at their showcase at SXSW 2011 – QRO photos).  The Cold Still isn’t quite the modern masters of alt-tragedy, The National (QRO spotlight on – who have their own Boxer – QRO review), and is more refined than the brogue coming out of acts from “England’s Noisy Upstairs Neighbor” Scotland such as Frightened Rabbit (QRO live review) or The Twilight Sad (QRO live review), but The Boxer Rebellion are “Surging Ahead” all the same.

Names Divine – “The Golden Phallus, His Holy Waifs, and the Coming of the Eucharist”