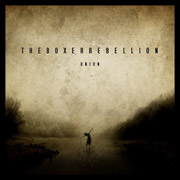 It’s been an up-and-down decade for London’s The Boxer Rebellion: after winning the Playlouder competition and earning a slot at the Glastonbury Festival in 2003, their 2005 debut, Exits, was poorly received and saw the band dropped by label Poptones.  Yet the band has now self-released their sophomore Union exclusively on iTunes, with first single “Evacuate” made ‘international single of the week’ – and Union debuted at #4 on the charts in their native Britain.  More importantly, The Boxer Rebellion have redeemed themselves from their over-dark, over-serious Exits, instead putting high harmony to their expansive Brit-rock.

Oddly, “Evacuate” is actually one of the weaker tracks on Union, its darker nature and jungle drumming not coming together as well as the record’s two prior pieces, “Flashing Red Light Means Go” and “Move On”.  “Flashing” opens the record with some nice spook-march drumming, before going into strong high expansive guitars that are the record’s hallmark.  Meanwhile, “Move” brings harmony and even pressure, the latter a facet not used enough on Union, but used well when it is.  The best example of that is later number “Forces”, whose pushing energy is married well to grand, fuzzy ambition.

The Boxer Rebellion do not always stick to big, high, Brit-rock, but while their ventures outside their comfort zone are nice changes, they’re not what the band does best, such as the softer, slower beauty of “Misplaced” and the following restrained, slightly indietronic “The Gospel of Goro Adachi”.  Better is the grander sadness of “Semi Automatic” or enchanting finishing send-off, “Silent Movie” (though “Spitting Fire” is one case of relative paint-by-the-numbers Brit-rock, akin to also highly-hyped countrymen Glasvegas – QRO album review).

Because Union was only released digitally, Billboard officially refuses to include it in their charts, something the institution will have to rectify if they want to stay relevant in this digital, post-label age.  The Boxer Rebellion certainly are – and will be releasing a physical copy, as soon as they find a label (which shouldn’t be hard now…).  But considering the improvement the band has made, on the internet’s expanse, maybe they should stay there…