<img src="http://www.qromag.com/wp-content/uploads/2011/05/thecarsmovelikethis.jpg" alt="The Cars : Move Like This" /><i>Move Like This</i><span style="font-style: normal">, The Cars' first release in almost 25 years is the same automobile, but that's a... 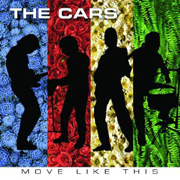 In their eighties heyday, The Cars were a bit difficult to pin down, somewhere between geeky and ironic in their pop, catchy and enjoyable without being bubblegum.  "Just What I Needed" has had the kind of longevity that most pop hits would kill for.  Unfortunately, The Cars didn’t, breaking up after 1987’s Door to Door.  Reunion rumors came to naught throughout the nineties, bassist/singer Benjamin Orr passed away from pancreatic cancer in 2000, and guitarist Elliot Easton & keyboardist Greg Hawkes’ ‘New Cars’ featured Todd Rundgren on lead vocals, not signature frontman Ric Ocasek.  But everything has been coming back around in music these days, and that includes The Cars.  Move Like This, their first release in almost twenty-five years (and featuring all the original members, save for Orr), is the same Cars, but that’s a sound that hasn’t lost its sparkle.

Everything The Cars ever did after breakthrough single "Just What I Needed" stands in its shadow, and Move is no different.  Indeed, the record somewhat lacks of standout single, and the band’s combination of catchy guitars, eighties-cheese synth notes, and staccato rhythm, while undoubtedly fresher today than back when everyone was doing it, still feels similar, track-to-track (the only real exceptions are "Soon" and "Take Another Look", sad-synth pieces that wouldn’t be out of place on a John Hughes soundtrack).  Better ones include opener "Blue Tip", middle piece "Free", and closer "Hits Me"; lesser ones include the bit of a slog in "Keep On Knocking" and "Drag On Forever" (the latter has a rather unfortunately apt title).

Whenever a band reunites, the question of new material hangs in the air like a double-edged Sword of Damocles – don’t make new songs, and everyone says that you’re just cashing in and are only nostalgia act (witness some of the comments directed The Pixies’ way – QRO live review); do make new stuff, and everyone wants you to skip it for the classics (like when The B-52s play anything off of Funplex – QRO review).  Still, the circle can be squared, and while Move Like This isn’t a reinvention of the automobile – more like brand-new classic Car – it’s one that will find favor with anyone who loved "Just What I Needed".  And that’s what you need from this welcome reunion.