<img src="http://www.qromag.com/wp-content/uploads/2009/09/thecribsignoretheignorant.jpg" alt=" " />How you take the latest from The Cribs depends on where you're coming from & what you're looking for. ... 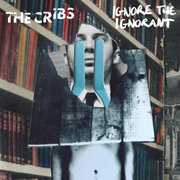 How you take Ignore the Ignorant, the latest from hit young U.K. indie-rockers The Cribs, depends on where you’re coming from & what you’re looking for.  Their last, Men’s Needs, Women’s Needs, Whatever (QRO review) disappointed a lot of folk over in the States, who had heard about not only The Cribs’ U.K. success, but that it was produced by Alex Kapranos (of Franz Ferdinand – QRO live review), and that they worked with Lee Renaldo (of Sonic Youth – QRO live review), yet what they got was weak alt-garage married to grating electro-sharp sounds, neither rock nor dance floor.  For Ignore, The Cribs not only got contributions from Johnny Marr (late of The Smiths, now also of Modest Mouse – QRO album review), but Mr. Marr joined brothers Greg, Ross & Ryan Jarman (the first & last are even twins…) as a full-fledged Crib.  So does Ignore finally live up to its inputs, or still down to its predecessor?  Well, neither, really…

The Cribs have certainly does some things right, or at least worked on some errors from past records.  Gone is the electro-sharpness of Men’s Needs, leaving a sort of ‘power-indie’: the big, heart-driven approach to pop that is power-pop, but applied to indie-rock.  Like power-pop, Ignore has tracks that are enjoyable, but relatively thin, like opener “We Were Aborted”, as well as the following “Cheat On Me” & “We Share the Same Skies”, plus later songs “Emasculate Me” & “Nothing”.  One major side benefit of this is that the band’s lame lyrics (just look at their song & album tiles…) aren’t nearly as prominent as on Men’s Needs or even the preceding, less electro The New Fellas.

However, when The Cribs employ a Brit-sway in the middle of Ignore, not only do those lyrics become more important, and thus more of a detriment, but the lessening of energy (and increasing of length) lets one more notice the band’s enjoyable-but-thin sound, like on the title track, as well as “Hari Kari”, “Last Year’s Snow”, “Save Your Secrets” and “Stick To Yr Guns”.  At least there is one really new, stand out song, “City of Bugs”, which is restrained to a nighttime sly, though also employs higher guitar expanse-rock moments.  While not perfect, “City” is much more accomplished than anything The Cribs have done before.

But it’s the penultimate “Victim of Mass Production” which really sums up Ignore the Ignorant: it’s boppy sway with lame lyrics, and is definitely enjoyable on the surface, but lacks depth (it also totally feels like the last song on the record, hurting the lounge sway of the following actual closer, “Stick”).  If you hated The Cribs from Men’s Needs, Ignore will be a nice improvement.  If you had high hopes after hearing about the addition of Jonny Marr, Ignore will be a disappointment.  If you knew nothing of The Cribs, Ignore will be nice enough, but nothing to write home about, one way or the other.