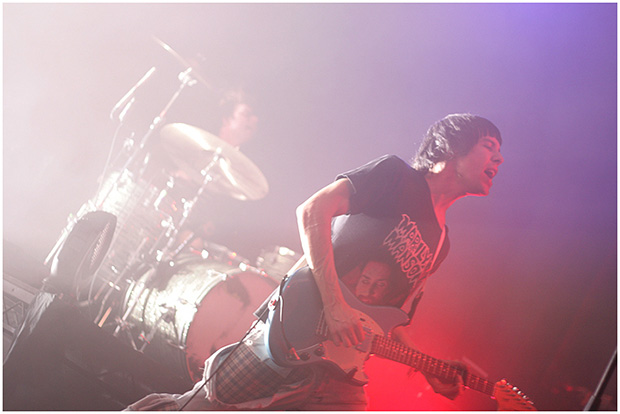 Click here for QRO’s review of The Cribs at Brighton Music Hall in Boston, MA on April 14th, 2012

Click here for QRO’s review of The Cribs at Wonder Ballroom in Portland, OR on January 29th, 2010

The student-filled O2 Academy in Manchester started heaving forward the instant the visual art showed “The Cribs” on the backdrop on Saturday, May 12th.  The surge was overwhelming as the band took their places.  Excited to hear songs from the new album, In the Belly of the Brazen Bull, the crowd’s chanting created a bouncing energy.

The stage seemed to grow with the set, the lighting: fast laser beams and strobes… purple, pink and green stripes of colour picking the lads out.  Time after time crowd surfers were being carried overhead to the front, jumping up and running round again, all adding to an electric atmosphere.

When they played “I’m a Realist”, it was reminiscent of being in a school assembly, with a hymn that everyone liked… turning to each other singing every word, with the lads shouting the words at the chorus, not bothered if they got done (told off) by the teacher.  The only time the hall wasn’t totally on their side was when they played “Anna”, a the lesser known track, as a trail of folk made their way to the bar; only to rush back carrying wobbly plastic pints in time to catch “Back to the Bolt-Hole”.

Shouting “JARMAN” from the hall, and presumably referring to a previous ‘pop industry middle men tweet’, Ryan laughingly related that, “We’ve always just been three weirdo’s from a garage in Wakefield.”

“Mirror Kisses” took things up another notch.  All hands in the air, jumping groups of people, lads standing on shoulders, Ross Jarman standing on a chair to play the drums – basically everyone trying to reach the roof to be where the atmosphere and noise was!

Just when you thought it couldn’t get louder or more manic, Jonny Marr took to the stage to join them for “We Were Aborted” and “We Share The Same Skies” from the 2009 album Ignore The Ignorant (QRO review).  Madness ensued.  Brilliant being part of such a crowd of happy people.

Johnny Marr – “Was great to re-join my brothers @thecribs on stage tonight.  We Share The Same Skies.”

Ryan Jarman – “Such an amazing gig in Manchester tonight, you guys were awesome.  Such fun to have Johnny onstage with us again too.  Big love x”