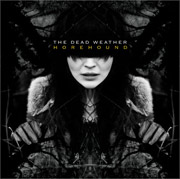 When the Anglo-American duo The Kills (QRO photos) first started turning heads, a lot of people compared singer Allison Mosshart & guitarist Jamie Hince to highly successful alt-rock duo The White Stripes (QRO live review), and not just because of the obvious male/female similarity, but also in how both bands drew from the dirtiest of blues, updating them and spicing it all up with their own personalities.  So it’s not a total shock that White Stripes singer/guitarist Jack White decided to team up with Mosshart (in his second project outside of The White Stripes) this year to form The Dead Weather.  But what was a surprise was that White took a backseat, on stage at least, playing drums, leaving Mosshart at the front, along with guitarist Dean Fertita (of Queens of The Stone Age) and bassist Jack Lawrence (of White’s other supergroup/side-project, The Raconteurs).  The sound of their debut release, Horehound, certainly draws from White’s dirty/blues, but the stop/start is all Kills, and, more significantly, it is Mosshart’s persona that lifts the record.

The best tracks on Horehound are where Mosshart’s barroom icon personality flourishes, such as first single “Hang You From the Heavens”, or the even-better following “I Cut Like a Buffalo”, where a little funk is thrown into the toughness, for a real bump-and-grinder.  Mosshart repeats that feat on “No Hassle Night”, and the band’s cover of Bob Dylan’s “New Pony”.  The Dead Weather need a powerful front-force; witness second single “Treat Me Like Your Mother”, where their energy is pumped up, but unfocused and all over the place.  Opener “60 Feet Tall” does go on a bit, while “Bone House” lacks anything special.

This isn’t to say White isn’t a presence on the record, and not just when he contributes some vocals & guitar.  White brings a driving pressure to Horehound on more subdued pieces like “So Far From Your Weapon” or “Rocking Horse”.  He also plays a major part in a couple change-ups near the end, including instrumental jam “3 Birds” and the closing “Will There Be Enough Water?”, in which Horehound goes really old-timey in its blues, a nice change & a nice send-off.

Meg White’s battle with acute anxiety in late 2007 led that duo to take some time off, with which Jack White started first The Raconteurs, and now The Dead Weather.  But whereas The Raconteurs were more of a Jack White side-project (albeit with a strong back-up, like Lawrence and guitarist Brendan Benson), The Dead Weather is a true collaboration that lets the not-quite-as-famous Mosshart shine brightly.  There have been times when Jack White has been overexposed, but the world definitely needs more Allison Mosshart.