<img src="http://www.qromag.com/wp-content/uploads/2009/01/theflaminglipschristmasonmars.jpg" alt=" " />The Flaming Lips' long-in-production feature film <i>Christmas on Mars</i> is as strange and remarkable as the band. ... 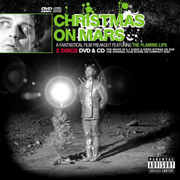 Out of time, out of place: everything about The Flaming Lips’ new feature film Christmas on Mars is in things being shouldn’t belong, whether it’s man in space, a baby grown in a pod, an alien in a Santa suit, genitals instead of heads, or the film’s vision of the future as was seen in the past.  Singer/frontman extraordinaire Wayne Coyne doesn’t appear until over a third of the way in, and never says a word the entire film; meanwhile, virtually the only actual singing is done by SNL’s Fred Armisen, one of the few actual actors appearing, and it’s a weak, played-for-laughs rendition of “Silent Night”.  And while it was finished over three years ago, Christmas on Mars is only getting its release now.  Yet the film represents both a vision of life and the strange, strange spectacles that the Flaming Lips use to see it.

The Flaming Lips’ mainstream success is often as odd as the unusual band: after one-hit wonder-itis in the early nineties with “She Don’t Use Jelly”, they’re explorations have just gotten freakier and freakier, whether releasing a four-disc album where one is meant to listen to all four albums simultaneously (1997’s Zaireeka; even the name doesn’t portend viability, seeing as it combines ‘eureka’ with ‘Zaire’, the massive central African country that has fallen into disrepair, coups, and civil/international conflict – and has even since abandoned the name ‘Zaire’…) to their ever-expanding stage show, which currently includes balloon drops, confetti cannons, costumed chorus players, video-in-video, punching nun dolls, crowd-surfing in a massive plastic bubble, and more.  Yet the band has gotten more and more attention, from the critical success of 1999’s The Soft Bulletin to Grammy Awards, regular festival appearances, and mainstream attention with their last studio record, 2006’s At War with the Mystics – The Flaming Lips have even been seen performing NBC’s theme tone song in interstitials on the network.

Finished in 2005, and something like seven years in the making, Christmas on Mars hews away from the band’s most recent accessibility for their stranger take from earlier this decade.  The barebones story is of the first colony on the Red Planet cracking up on Christmas Eve, awaiting the birth of the planet’s first child and/or the collapse of the fraying hardware that keeps them alive.  Lips multi-instrumentalist Steven Drozd plays Major Syrtis, who’s trying to stave off the crew’s cabin fever by holding a Christmas pageant – while his own sanity is slipping away (following in the footsteps of some other crewmen).  Coyne appears as an antennaed green alien who obliquely comes to save the station, while taciturn bassist Michael Ivins saves Christmas.

Trailer for Christmas on Mars:

Directed (with Lips visual artists Bradley Beesley and George Salisbury) and written by Coyne, Christmas takes clear inspiration from the late sixties/early seventies new wave in science fiction cinema, whether the psychedelic explosions of Stanley Kubrick’s famed 2001: A Space Odyssey, the isolation-induced psychodrama of the Soviet Union’s Solaris, or the far-off technological collapse (and black humor) of John Carpenter’s underrated 1974 student short-into-film Dark Star.  A small production budget (The Lips are from Oklahoma City, not Hollywood…) may have necessitated the retro-tech look, but the lo-fi special effects come together with the grainy cinematography and Coyne’s ridiculous ‘Martian outfit’ (he’s supposed to be green, but most of the film is in black & white, with only occasional bursts of color) to put Christmas somewhere between what people in 1970 thought the future was going to be, and a joke upon that vision.

But perhaps even more of an inspiration was David Lynch’s cult classic surrealist-horror work Eraserhead, released in 1977 after its own long gestation.  Similarly not a conventional movie by any means (and possessing much of the same jury-rigged, fraying industry), Christmas starts with a long wordless portion, and the Eraserhead/Naked Lunch-like images of dead babies and pulsating genitals can be quite uncomfortable to those not aware of the group’s regular usage of them, especially in such an otherwise un-graphic film (though the genitals, at least, become almost comic by the end, when rendered in cheap, oversized prop puppetry).  Most of the moments of humor come from the cursing Middle American station commander, though Armisen’s line, “Cosmic reality, it’s a real motherfucker”, is both meaningful and hilarious.  The acting from these non-actors, including the commander, is unsurprisingly sub-par (though often-supporting role actor/comedian Adam Goldberg does deliver in his one scene as the ship’s stressed psychiatrist), with Coyne’s alien, in particular, never really pulling it off as the station’s savior, going from mildly odd and amusing to leadenly uninventive and lacking in a revelatory aspect.  However, Drozd serves better in his more central role (letting/making Coyne seem more like an over-odd supporting player): his depressed confusion becomes increasingly winning as the film goes on, to the point where you actually come to somewhat identify with the Major.

The bonus features, including interviews with band members and a making of doc, give some words behind the project.  The deluxe edition, meanwhile, includes the (wordless) soundtrack, a collection of twelve trippy, old-school atmospheric instrumental tracks with names like “In Excelsior Vaginalistic” and “The Horrors of Isolation: The Celestial Dissolve, Triumphant Hallucination, Light Being Absorbed”.  While it starts as a solipsistic, navel-gazing, ‘far out, man…’ “film”, The Flaming Lips’ charm, intelligence, and attitude elevate Christmas on Mars (even if the frontman/backman Coyne/Drozd dialectic from on stage is really flipped around) to an interesting, memorable, and, at points, even compelling mind-trip.