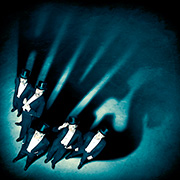 While The Hives have never truly explored new territory, or expanded their garage-rock genre, they have squeezed every drop possible out of their sound.  Their energy, notorious on stage, is well reflected in their records.  Latest Lex Hives keeps up that tradition.

Another Hives-ian tradition is infectious, killer, rock ‘n’ roll singles, and that also continues with "Go Right Ahead" and the should-be-next single "These Spectacles Reveal the Nostalgics".  Both bring that garage-energy that the band is known for, and bring it in spades.  Other Lex standouts include the opener, "Come On!" (just a great way to open a Hives record) and rollicking closer "Midnight Shifter".

However, it can all run a bit together, resulting in enjoyable but not breakthrough pieces such as "Wait a Minute" and "My Time Is Coming".  And when the band varies up the speed, Lex largely doesn’t benefit – the speedier "1000 Answers" and "If I Had a Cent" aren’t amazing, and so is the case with the procession "I Want More", but it is the really stop-start "Without the Money" where the band does not shine.

Thankfully, "These Spectacles" follows and brings you right back to The Hives that you wanted.  The ‘The’ bands that broke out in the garage-sound early in this century/millennium have gone various directions, such as the dissolution of The White Stripes (QRO live review) or decline of the The Vines (QRO album review), but although The Hives disappeared for a bit these recent years (taking half a decade to self-produce & release Lex Hives), they’ve never wavered.  So go right ahead.