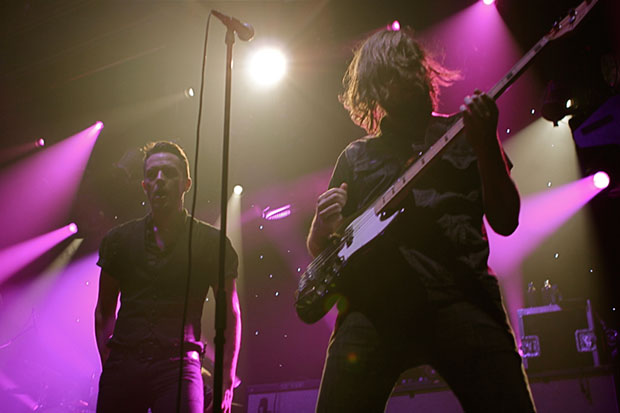 Remember when you loved The Killers?  When you listened to debut Hot Fuss all of the time (or at least the first half)?  When you couldn’t get “Somebody Told Me” or “Mr. Brightside” out of your head?  When you saw their “Brightside” video with the one-and-only Eric Roberts?

Remember when you hated The Killers?  When you heard about their feud with The Bravery (QRO album review) over which band had the dark secret in their past of once being ska?  When singer Brandon Flowers promised that Hot Fuss follow-up Sam’s Town would be, “One of the best albums of the past twenty years”?  When not just Sam’s Town but all subsequent records failed to come close to the heights of Hot Fuss?  When Flowers went solo and you couldn’t have care less?

Well, The Killers aren’t quite back in the Hot Fuss, but go to their live show and you’ll find yourself definitely back in the love side of the love-hate equilibrium, such as their special intimate gig on Monday, July 23rd at Webster Hall in New York City.

One of many late-announced NYC gigs of bands that were also playing Delaware’s new Firefly Festival the prior weekend (QRO preview) – festivals often demand late announcements of regular gigs in return for paying for the band to play the fest – the show sold-out fast, and Webster Hall was packed, with a line (in the rain) down the block for will call tickets.  And the crowd was not your hipsters but more bros & their girls (including at least one girl celebrating her twenty-first birthday – and demanded that her boyfriend get her a mai-tai…).  It was kind of like when The Bravery did a (free ticketed) show there for Heineken (QRO photos) – the kind of bros who’d get really pissed when the overworked bartenders wouldn’t attend to them fast enough.  Of course, hipsters are too cool to rush to buy tickets to The Killers… 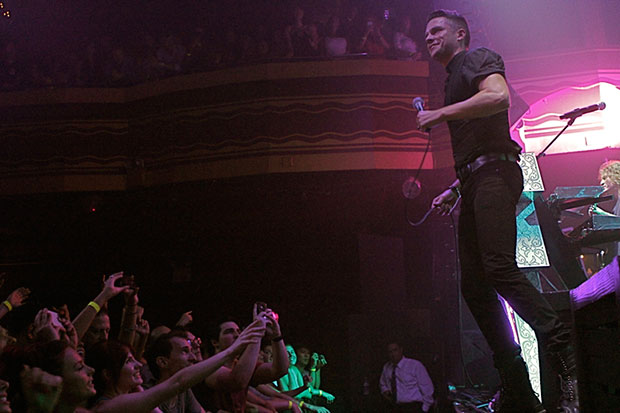 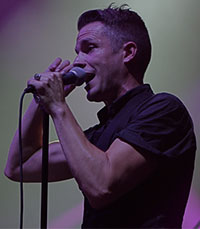 The show was also a chance to test live some new material, and the band started with their new single “Runaways” (from the upcoming Battle Born).  Like much of their post-Fuss work, “Runaways” had a Bruce Springsteen-esque ‘common man uplift’ attitude, yet as an electro-pop/rock song.  However, it’s some of the best Springsteen-esque ‘common man uplift’ electro-pop/rock that the band has done, and was more than able to start the show (of course, having already been released, it wasn’t strictly ‘new’, and a lot of the crowd already knew it, but that only further proves its power/the crowd’s love).  And then The Killers did not one, but two Fuss pieces, breakthrough debut single “Somebody Told Me” and also “Smile Like You Mean It”, both of which had the crowd singing along.

“Spaceman”, from their most recent record, Day & Age (QRO review), kept up most of that momentum, but Age‘s “This Is Your Life” and the new “Miss Atomic Bomb” couldn’t help but lose some of it, with the later a more overwrought version of “Runaways”.  The middle of the set saw tracks from Age and Sam’s Town (though only Joy Division cover “Shadowplay” from the record between those two, Sawdust), with some songs succeeding more than others (“For Reasons Unknown”, “Human”, and “A Dustland Fairytale” stood tallest), but all superior to hearing them on record.  Flowers is an active and emotive frontman (and even played bass on “Reasons”), often miming his lyrics or climbing the monitors, and was visually backed up by a killer light show (and thankfully not the over-smoke machine that Webster Hall usually has – QRO venue review).

The Killers went into the encore break with another double-dose of Fuss, “Mr. Brightside” and “All These Things That I’ve Done For You”.  It was interesting that the band didn’t close the night, or even the regular part of the set, with either “Brightside” or “Somebody”, despite those still being their best-known songs.  But this wasn’t a festival (where bands almost always close with their best-known song), but rather a night for Killers lovers.  “Mr. Brightside” really only could have been better had Eric Roberts been there (but what wouldn’t?…), and “All These Things” was still a suitably epic song to go into the encore break with.

While they’d only played two new songs during the entire regular set (and one of those had already been released as a single), The Killers returned playing a pair of new numbers, “Here On Out” and “Flesh & Bone”.  The former had an alt-country/pop backbeat, something new for the band, though the latter did feel a little overwrought.  And while the band did play Fuss‘ amazing “Jenny Was a Friend of Mine” in the encore, it wasn’t the closer, but rather Sam’s Town‘s “When You Were Yong” – and of all the post-Fuss songs played that night, after the show it was the one most deserving of a (positive) reassessment.

The Killers might never make another “Mr. Brightside” or “Somebody Told Me” (just as The Bravery will never make another “An Honest Mistake” – QRO video).  And when someone in the crowd (apparently) yelled, “Day & Age sucked!”, Flowers replied, “I hope all our records suck as much as Day & Age…”  But even if you felt out of love with the band a long time ago, see them live, check out the new Battle Born & their other records – seeing them live first, as they make a pretty damn good impression with a pretty damn good show. 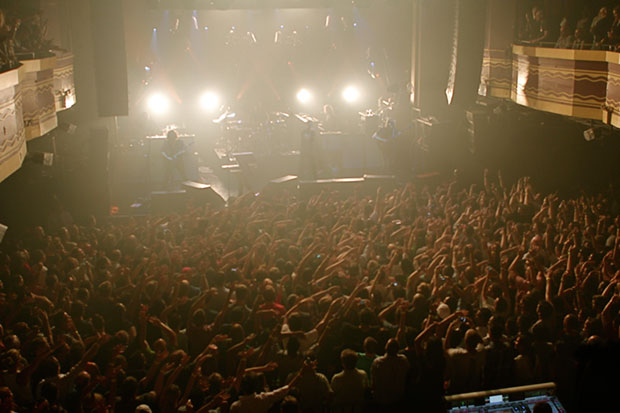 Langhorne Slim : The Way We Move