<img src="http://www.qromag.com/wp-content/uploads/2009/03/thepicturemar5sm.jpg" alt=" " />The Picture filled an even bigger frame when they stepped up to Bowery Ballroom.<br />... 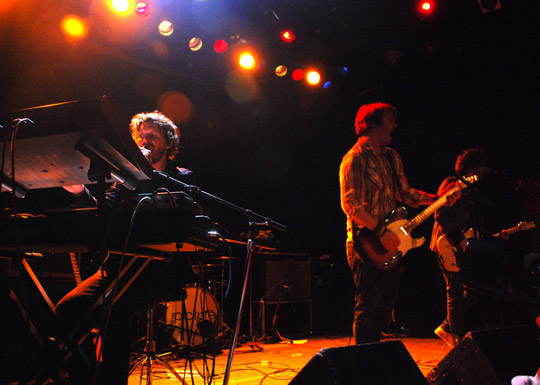 Click here for QRO’s review of The Picture at Mercury Lounge in New York, NY on January 23rd, 2009

Click here for photos of The Picture at Piano’s in New York, NY on December 2nd, 2008 in the QRO Concert Photo Gallery

Barely over a month after playing to a packed house at New York’s Mercury Lounge (QRO venue review), locals The Picture took a step up in the ‘Bowery Presents’ chain to rock a special show at Bowery Ballroom (QRO venue review) on March 5th.  Whereas the Mercury show (QRO review) was stuffed to the gills with Picture fans on a Friday night, the band played Bowery on a Wednesday as the headliner – of four bands.  This all meant that the crowd wasn’t as huge or as loyal as at Mercury (especially with many fans of the up-and-coming Kiss Off – QRO photos – skipping out rather than sit through The Picture’s lead-in, the annoying Murder Mystery – QRO photos), but The Picture took full advantage of the wider space to hit up material old – and new.

Having just put out their first EP, Bluebirds (QRO review), it wasn’t surprising that The Picture started their show with tracks off of it.  Like on Bluebirds (and at Mercury), the first two numbers of the night were “Another Army” and “The Shadows”.  The expanse of “Army” really fit the wider, deeper, and taller Bowery, and the song’s brightness was well juxtaposed with the darker, more 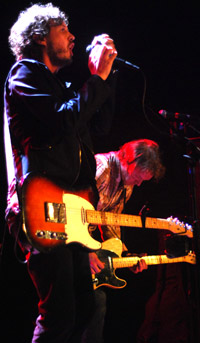 haunting “Shadows”.  The driving “Samantha and Her Friend”, also from Bluebirds & Mercury, didn’t take quite the same step up live as it had back in January, but the new “Heavyweight” completely utilized Bowery’s size, letting its higher meaning and atmosphere fill the place up.

Unfortunately, after that, The Picture had some technical difficulties, forcing a halt to the show (which singer/guitarist Robert Abel filled with a weak Obama speech – seriously, the only people who’ve been more hurt than indie-rockers in the witty banter department by Bush’s departure are late night comedians…).  That did kind of kill the momentum and leave the following new “Tied Up In Knots” a touch forgettable, forcing the band to build back up to the heights they’d already reached – and now with new songs.  “Victory Room” was an interesting mix of stripped-to-meaning and alt-dirty country/rock undertones, but it was “Song 3” (hopefully just yet-to-be-titled – at least they didn’t name it “Song #2”, as Blur still have a patent on that…) that really grew in Bowery, utilizing the press that The Picture does so well. 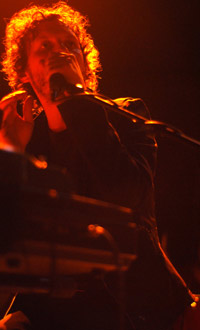 The break also probably forced the band to skip the next song on the set list (QRO photo), “Tucked In Corners”, but still returned to Bluebirds with the still-and-always-will-be standout “Deer Crossing”, plus switching up the instruments of Robert Abel and his keyboardist brother Greg for “Devious” (one a particular fan in the crowd had been shouting quite loudly for) to go into the encore break.  The Picture returned with the one non-Bluebirds track that night that was also featured at Mercury, “Arrested”, but in the bigger Bowery, the sadder song was more expansive, and just outright better.

In just four month and three days, The Picture have gone from playing (QRO photos) the small Piano’s (QRO venue review) to packing the somewhat larger Mercury to headlining the big & established Bowery.  If the crowd (again less hipster, more bridge-and-tunnel) was thinner, that was to be expected, playing so soon after the last show, in a bigger place, at a later hour, and on a Wednesday night (plus, it did mean one could go back and get a drink – which many in the crowd availed themselves of…).  What was surprising was how well The Picture’s sound fit the larger environs – though perhaps that, too, should have been expected, considering how the band has trafficked in expanse to mix with their nineties alt-rock.  Whatever it was, it was done right that night. 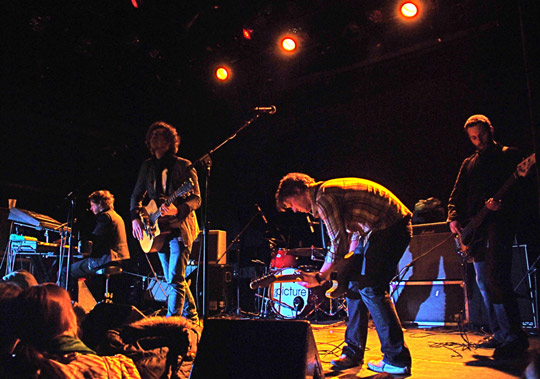