<img src="http://www.qromag.com/wp-content/uploads/2011/10/theraptureinthegrace.jpg" alt="The Rapture : In the Grace of Your Love" /><br /> The Rapture have a dedicated following whose patience has been tested in waiting a massive five... 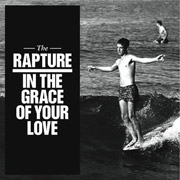 The Rapture have a dedicated following whose patience has been tested in waiting a massive five years for In the Grace of Your Love, the fourth album from the New Yorkers.

The album starts strongly with "Sail Away", an anthemistic love song, the emotive lyrics of which are matched perfectly with crashing cymbals.  Unfortunately the song does peter out towards the end, and by the close it has become a strange psychedelic instrumental.  The rest of the record is, thankfully, better paced.  "Miss You" sounds like it could come from the band’s third album Pieces of the People We Love, showing that they haven’t moved too far from their crowd-pleasing dance-pop.  There are several more highlights including the single "How Deep Is Your Love", a nod to 1990s dance music, and final track "It Takes Time To Be a Man", which combines piano, guitar and drums to a beautiful, slow-paced, funk-infused ditty.

Click here for photos of The Rapture at 2012 Primavera Sound Festival in Barcelona, Spain in the QRO Concert Photo Gallery

Click here for photos of The Rapture at CMJ 2011 in New York, NY in the QRO Concert Photo Gallery

There are a few low points throughout the album, songs like "Can You Find a Way?" and the title track become derivative.  Neither of these songs is bad, but they don’t go anywhere and end up feeling too long.  This would not matter during a live performance, but on record it shows up.

The Rapture have never compromised their own sound with passing trends in music, and this album is no exception.  Influences come from many corners, even shades of 1980s rock can be heard in "Blue Bird".  There is something about the combination of the influences that makes the sound specific to the band.

In the Grace of Your Love does not cover any new ground, so fans of previous work shouldn’t be disappointed.  There is more maturity in the lyrics, but the sound remains the same.  After such a long wait, it would have been nice to hear something a little more exciting, but a tried and tested formula is better than a failed experiment.