<img src="https://www.qromag.com/wp-content/uploads/2011/10/thericecakesmountainmanep.jpg" alt="The Rice Cakes : Mountain Man EP" /><br /> A strong showing all and all for the hardest working team in the Ocean State. ... 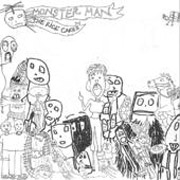 Providence, Rhode Island’s The Rice Cakes are a lot of things.  They are one of the hardest working bands in the east coast underground rock scene, touring constantly and putting out a steady stream of self-recorded releases over the last two years.  They are a highly accomplished musical trio, combining the break neck rhythms of drummer Casey Belisle and bassist Justin Foster with ambient organ work of lead singer/song writer Roz Raskin.  They are on the rise, after being voted ‘Best Local Act’ 2010 in the Providence Phoenix; The Rice Cakes have gone on extensive tours sponsored by local beer company Narragansett, with bigger and bigger crowds filling the local clubs and basements that they frequent.  They are also currently hard at work on the promotional trail for their new EP, Monster Man.

Monster Man works as a six-song synopsis of where The Rice Cakes are these days.  With such selections at the chaotic, minute long punk shot in the arm "Hate", to the slow, fuzzed out, waltz ballad "Gore", it works well as an introduction to where the Providence trio has been since their premiere full length, 2009’s The Friendship, and where they find themselves after the two year burn nearly non-stop touring and recording.

The stand out single on the album is "Magma", a sort of calypso-backed pop hit with overtones of sadness and fear laced into the vocals.  The song also features several tempo changes, bi-polar mood shifts, and overlaying vocal melodies, all prominent features in many of The Rice Cakes songs.

Being a self-recorded effort, the album’s quality holds a very strong D.I.Y. ethic.  This results in some redlining fuzz in many of the songs, which at times makes some lyrics had to decipher.  This also tends to add the charm of the record’s (and the band’s for that matter) punk/art rock attitude.

A strong showing all and all for the hardest working team in the Ocean State.  They maintain the dark overtones and instrument virtuosity that has made them an under the radar hit, while adding in some new bells and whistles to separate Monster Man from their previous releases.  A good jumping on point for those who have yet to become fans of what is quickly becoming an extremely popular east coast establishment.