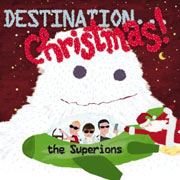 Christmas albums come in two types: very serious and very un-serious.  No bonus points for guessing what kind of record Fred Schneider put together.  As the memorable frontman of dance-mock B-52s, Schneider has been front & center on such seminal songs as “Rock Lobster” and “Love Shack”, as a sort of gay-glam version of Elvis or Buddy Holly, with a voice so ultra-recognizable that if you need it to be described to you, just don’t bother reading the rest of this review.  The holidays seemed ripe for his mock-rock – so ripe, in fact, that one kind of wonders why he hasn’t done a Christmas album before.

In 2008, The B-52s (now shorn of their apostrophe), released Funplex (QRO review), their first new studio record in sixteen years.  But also that year, Schneider teamed up with friends/fellow vinyl enthusiasts/people he crashes with whenever in Orlando, Noah Brodie and Dan Marshall, as The Superions, releasing a self-titled EP that included “Who Threw That Ham At Me?” (which was released on iTunes coincidentally the day after Paula Dean got a ham thrown at her).  While working on a full-length Superions record, Schneider got the idea to do a Christmas album, putting lyrics to Brodie & Marshall’s keys & beats (respectively), at one point making nine songs in eleven days.  Destination… Christmas! does feel like it was put together too fast, as it’s not exactly complex, and all the songs being about the same subject can make them sound the same.  Plus Brodie & Marshall are more experienced amateurs than true professional musicians.  But if anybody’s gonna sing about Santa having a disco, it’s Fred Schneider.

“Santa’s Disco” kicks off Christmas!, and sets the tone, though it is the slightly less seasonal “Fruitcake” that follows that is the first single.  Like any mock-Christmas music, the songs on the record wear down after repeated listen, but The Superions have choice cuts about a “Crummy Christmas Tree” (an old Schneider holiday song about what really would have happened to Charlie Brown’s sad little pine), “Teddy and Betty Yeti” getting their revenge on Santa for never giving the pair of abominable snowpeople gifts, and a take-down of the holiday spirit in “Christmas Tears”.  And “Chillin’ At Christmas” actually works better after more spins.

Despite “Crummy” and “Tears”, Destination… Christmas! is actually pretty upbeat about the holiday season – and Schneider doesn’t spare on the come-on songs, such as “Jingle Those Bells” and “Under the Tree” (though the latter would have been better served not being between the also-sexy former and the also tree-themed “Crummy” on the track list).  It’s not a record that’s going to become a main staple on your stereo, even for B-52s fans, but will definitely find its way in there come December, and that’s about all that you’re looking for.