<img src="http://www.qromag.com/wp-content/uploads/2011/02/thevitrolumrepublic.jpg" alt=" " />Every once in a while, an album comes along that forces you to exclaim, "<i>This</i> is how this entire genre should sound!" ... 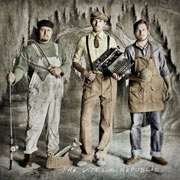 Every once in a while, an album comes along that forces you to exclaim, "This is how this entire genre should sound!"  The Vitrolum Republic’s debut For Highbrow Sideshows and Rowboat Serenades is one of those albums.  Hailing from Milwaukee, Wisconsin, this trio offers more to classic folk music than the likes of bigger modern acts such as Bon Iver (QRO album review) or Fleet Foxes (QRO album review) ever could.

One cannot help but notice FHSaRS‘s beautiful harmonies from the very beginning.  There’s something in the way that the three sing "Doo doodoo doowah" in the chorus of the opening track "Willow Song" which instantly hooks the listener for the rest of the fifty-six minute runtime, which goes by practically unnoticed.  Through the use of the accordion, violin, and piano as well as the standard acoustic guitar, The Vitrolum Republic are able to offer a retro style rarely seen nowadays, sometimes giving them an almost gypsy-like quality to their sound.

The album’s title is fitting, bringing the listener back to a classic, nearly forgotten time during the early 20th Century.  It reflects the era’s general feeling of hope in times of desperation, a cliché that many attempt for this modern generation but few pull off this well.  Tracks like "Sunday Drive" act as a literal time machine into the past, swooning listeners over to a simpler time with its catchy banjo melody.  It effectively makes them yearn to throw their computers and cell-phones down for just an hour and forgot about the stress of modern life in favor of a simple Sunday afternoon drive with the top down.

This is an album and a band that should not go by unnoticed.  Two years in the making, the effort and talent put into this record is blatantly obvious.  For Highbrow Sideshows and Rowboat Serenades universally transcends anything recorded before it, dropping modern bells and whistles to display the core beauty of music at its absolute finest.  Folk like this, put simply, does not exist like this anymore.  Vitrolum, a fictional word invented by the band, represents a conduit of expression, while Republic stands for the other members they’ve played with as well as the audiences they play for.  Rarely can one find a group with a more fitting and deserving name.