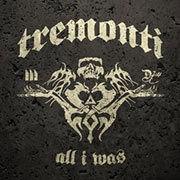 Grab a Busch beer, pull up a chair, and get ready for the latest musical installment from the Creed family.

Mark Tremonti (most known for his role as Creed’s guitarist) has just released his first solo album under the moniker ‘Tremonti’.  Creed is most known for being one of the most hated bands in rock music in recent history, so Mark Tremonti is going into this album with the deck stacked against him.

As far as lyrics go with this album, there is a lot of, "So unlike the way you know me / All these dreams / Are so unlike the way they were before," and, "I tear at this pain, this darkness I’ve known" going on.  If you didn’t know any better you would think he is some sort of reformed convict.  Granted, we don’t know what sort of struggles and trials he may have gone through personally, but what is it about guys like this that make them think they can only write songs that sound like they have suffered the worst atrocities known to man?

One surprise present with All I Was is that it falls more into the speed-rock category instead of the more epic-sounding rock for which Creed is so widely known.  This is most evident on the songs "So You’re Afraid" and "Wish You Well".  There are a few songs on the slower side such as "The Things I’ve Seen", "New Way Out", and "Proof".  Apparently he has a soft side after all.

Calling it like it is, this album is better than one might expect from a member of Creed.  Sure the lyrics may be cheesy, but if there is one thing Mark Tremonti proves on this album it is that he can shred with the best of them.  Who knows, maybe the next time Scott Stapp goes off the deep end Mark Tremonti can just step up to the microphone and Creed can become a trio.