<img src="http://www.qromag.com/wp-content/uploads/2011/05/tylerthecreatorgoblin.jpg" alt="Tyler, the Creator : Goblin" />With Tyler, the Creator's awaited <i>Goblin</i>, the disappointment comes from that it is a good album, not a great one.<span> <br... 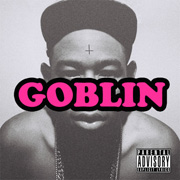 Goblin is Tyler the Creator’s highly anticipated follow up to Bastard.  Ever since “Yonkers” dropped in mid February, the entire rap world, excluding perhaps Bruno Mars and B.o.B., has been waiting on Tyler’s every caps-locked tweet.

Goblin features many members of the Odd Future Wolf Gang Kill Them All (OFWGKTA, or just Odd Future).  Frank Ocean, Hodgy Beats, Jasper Dolphin, Taco Bennet, Domo Genesis and Mike G, all make their mark on at least one track.  They each bring something different, especially Frank Ocean, whose smooth R&B crooning is a great counterpoint to Tyler’s snarls, growls, and guttural groans.

The beats, for the most part, follow the same pattern as Bastard.  A foundation of smoky mysterious synth textures swims underneath some organization of snares, digital hits or other rhythmic devices.  All the while, Tyler or another member of OFWGKTA spits about rape, murder, darkness, new fame, or drugs.

It’s a good formula, but more was expected of Goblin.  In every way it is a follow-up to Bastard.  Any track on Goblin could easily be traded with any track on Bastard with minimal fuss, excluding “Yonkers”.  That’s not a horrible thing, but “Yonkers” blew the world out of the water, and the world wanted more of the same.  That’s not what Tyler did though.  He has made a perfectly good album, but without any risks, and without any tracks really on the same level as “Yonkers”.  The disappointment that comes with Goblin comes from that it is a good album, not a great one.

Then again, it’s not really like making the critics happy is really high up on Tyler’s to-do list.  This is the same guy who did a stage dive, broke an audience members nose, then got up on stage and kept performing.  Pleasing others is not a high priority.  Tyler’s doing his thing and doesn’t really care what anybody else thinks.  Listening to Goblin that’s an easy thing to realize.