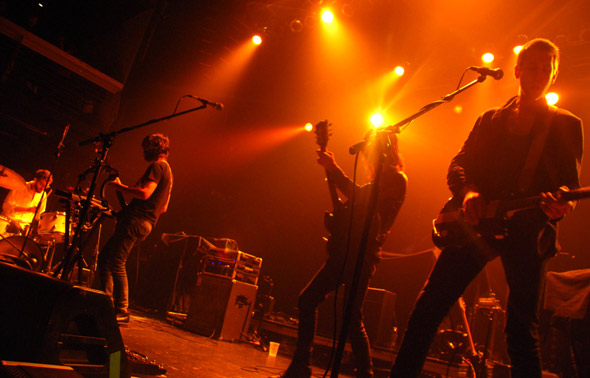 Click here for photos of VHS or Beta at Highline Ballroom in New York, NY on April 8th, 2008 in the QRO Concert Photo Gallery

Click here for QRO’s review of VHS or Beta at Blender Theater at Gramercy in New York, NY on November 16th, 2007

Click here for photos of VHS or Beta at The Dome in Lexington, KY on July 20th, 2007 in the QRO Concert Photo Gallery

Back in the nineties, the music industry tried to ‘break’ electronic music in the States.  It had always been popular over in Europe, so acts like Prodigy and The Chemical Brothers (QRO album review) came over – and didn’t become the next big thing.  Instead, it took another decade, and the internet-induced collapse of the music industry, for electronic music to truly succeed in the U.S.  There are still tons of European acts coming to America, but also homegrown ones – not just from the big cities, but even out in the flyover states, such as Louisville’s VHS or Beta, who made a name for themselves with 2004’s Night on Fire and 2007’s Bring On the Comets (QRO review), on famed electronic imprint Astralwerks (The Chemical Brothers & more).

And then… the group seemed to disappear for a few years, save for the occasional DJ spot.  Well, a slimmed-down VHS or Beta are back, and played New York’s Terminal 5 on Saturday, October 8th.

VHS or Beta came to the massive Terminal 5 opening for English ladies & gents Ladytron (QRO photos), a more ‘traditional European electronic act.’  But VHS or Beta were touring behind their own just-out Diamonds and Death (QRO review), which has a slimmed-down sound to go with the slimmed-down band.  It was also a slimmed-down set, with only six songs in twenty-five minutes, starting at 7:40 PM sharp (and they were the main opener…).  A good number of people going to the show probably missed some or all of VHS or Beta’s set, stuck traveling to the far west Midtown Terminal 5 (QRO venue review).

The set naturally was composed mostly of Diamonds and Death, including strong single “Breaking Bones”.  “Bones” made a great two-for with the following “Burn It All Down”, from Comets – Night on Fire also got into the set list, as that record’s title track ended their set.  It took the crowd a little time to warm up (and for Terminal 5 to fill up), but there was definite dancing by the time VHS or Beta lit the evening alight (and cheers for drummer, who was celebrating his 35th birthday).

After their absence, VHS or Beta still need more time to reintroduce themselves to American audiences (to say nothing of abroad, where they’ve been very well received, playing in front of thousands – for their own show – in Columbia, for instance).  But they’re definitely back in the mix of today’s burgeoning American electronic scene. 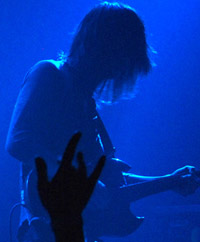