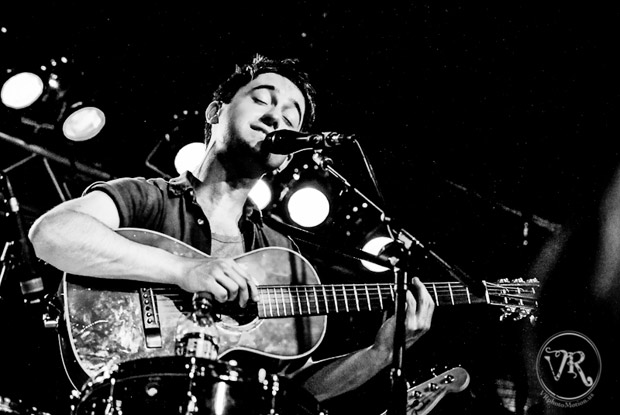 Click here for photos of Villagers at Vogue Theatre in Vancouver, BC, Canada on July 12th, 2015 in the QRO Concert Photo Gallery

Click here for photos of Villagers at Barboza in Seattle, WA on July 11th, 2015 in the QRO Concert Photo Gallery

Click here for photos of Villagers at Warsaw in Brooklyn, NY on March 23rd, 2015 in the QRO Concert Photo Gallery

Click here for photos of Villagers at 2013 Haldern Pop Music Festival in Rees-Haldern, Germany in the QRO Concert Photo Gallery

Click here for QRO’s review of Villagers at Manhattan Inn in Brooklyn, NY on April 11th, 2013

After playing a sloppy set of harmonies and arrangements, the opening band San Fermin stated that it was only their fourth show playing together, thanked the Villagers for having them and promptly left, reducing the audience by ten percent.

A little road weary after crossing the pond and being harassed by immigration, Villagers played an amazing show comprised of songs from their first album, Becoming a Jackal, and their new record, {Awayland} (QRO review).

The songs from {Awayland} can only be described as epic.  They deserve to be heard in a great hall, something with wonderful acoustics so that soundscapes can surround the audience.  Conor O’Brien’s presence fills the room, not just the stage.  He plays a few songs solo, but it’s easy to forget that it’s just one man singing with his guitar.

He opened with “Memoir”, a song he wrote by request for Charlotte Gainsbourg (QRO album review), accompanied by Cormac Curran on keys before bringing out the Village people.  Somberly, they began with “My Lighthouse”.  It started with a haunting three-part harmony, which surfaced repeatedly throughout.  The complexity of their arrangement is impossible for this non-musician to put into words.  It brings up images of dense fog over dark and stormy water; the sirens call beckoning one to rocky cliffs.  The feeling is unsettling, yet comforting.

Though they play songs from Becoming a Jackal, they were drastically different from the recorded versions.  The songs evolved during their two-year tour and fans that came with the expectation of hearing what they heard on that album were surprised, as will be the new fans that purchased it at the show. 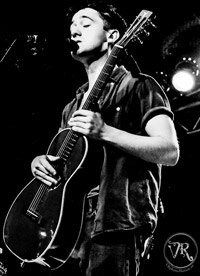 It isn’t only arrangements of the songs that have been changed, but the lyrics have changed in some of them too.  The intimate confession of “Becoming a Jackal” is no longer a confession.  It’s as though O’Brien is pulling back, taking himself out the songs, protecting himself.  The words have been changed from, “I’m selling you my fears,” to, “We’re selling you our fears.”  There were other such changes to lyrics as well.

In “Home”, it’s now his family or “my family” instead of “a family” when O’Brien sings “A house / The first thing I see / Filled up with ‘my’ family.”  Perhaps these are changes only someone who has listened to the album way too many times would notice, but they are jarring.  Change is hard.

One such change is “That Day”, which O’Brien played for an encore.  As he introduced it, he stated, “This is how we should have recorded it.”  The new solo version is slow and sensual with lingering harmonies, but the thunderous accompaniment of the band in the studio version has vanished.  What was a song a bit on the poppy side, full of wondrous joy, is now soft and somber, with no hope, just a lingering sorrow of missed opportunity.

The ebb and flow of music by Villagers moves one on a spiritual roller coaster of ups and downs with the new energy of {Awayland} and the inevitable maturity of the band.  “27 Strangers” remains a crowd pleaser and has the audience singing along in reverence.  One hopes it is in reverence to themselves.

Villagers are a treat to the ears and the soul, something new opened with this album and these songs.  They played in Washington the night before and then headed to the NXNE festival in Toronto (QRO preview), where they play two shows before heading back to Europe.  It’s an honor to share in the experience of Villagers.  This reporter hopes they come back to the U.S. and that the next North American tour is more fruitful. 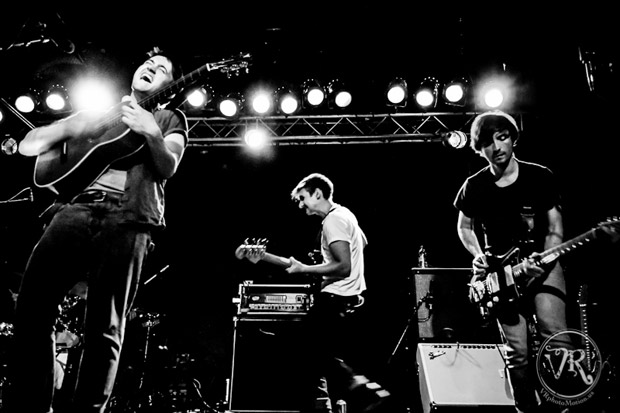