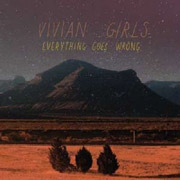 At some point, Brooklyn’s garage-rock revival merged with lo-fi scene, taking all in under a layer of Williamsburg fuzz.  At the forefront of that merger has been Vivian Girls, playing any number of Todd P house parties in dives like Death By Audio (QRO venue review), while not going full-on ‘shitgaze’ like all the No Age (QRO live review) apers out there.  This has left the three-piece (who are actually all girls…) open to criticism that their sound hasn’t matured, and to an extent, that’s correct.  On their latest, Everything Goes Wrong, while the title event doesn’t happen, their garage-fuzz struggles to stand out, though is still nice enough.

Click here for photos of Vivian Girls at Logan Square Auditorium in Chicago, IL on April 22nd, 2011 in the QRO Concert Photo Gallery

Click here for photos of Vivian Girls at Pitchfork Music Festival in Chicago, IL on July 19th, 2009 in the QRO Concert Photo Gallery

Click here for photos of Vivian Girls at SXSW 2009 in Austin, TX in the QRO Concert Photo Gallery

One thing Vivian Girls brought to the table on their self-titled debut (QRO review) last year was girl-group harmonies, something few bands could match, naturally.  However, Vivian Girls’s superior tracks were ones where singer/guitarist Cassie Ramone’s voice stood alone & stood out.  Unfortunately, neither element comes into play enough on Everything, as the band ups the fuzz.  That leaves Vivian Girls’ songs, already tough to distinguish on their first record, even harder to tell apart on their second.

However, there are some moments that stand out, most notably when Ramone brings a single-string guitar solo to numbers like “Can’t Get Over You”, “Survival”, and “You’re My Guy”.  The penultimate “Guy” maybe best sums up the best parts of the Vivian Girls, girl-group, high-fuzz, speed, and the single-string moments.  Closer “Before I Start To Cry” follows it, a sad, slow piece that shows the depth & growth the rest of Everybody kind of needed.

While fellow Brooklyn garage-rock revivalists Crystal Stilts (QRO album review), who ‘stole’ original Vivian drummer Frankie Rose, have evolved like garage-rock (now entering the mid-sixties Velvet Underground stylings), Vivian Girls seem more comfortable keeping things loose & easy.  That has earned them some criticism (The Onion, for one, seems to hate Vivian Girls, or at least whoever writes their Decider concert listings for NYC does…), and Everything Goes Wrong doesn’t move nearly as far forward (releasing a second record, just a year after the debut, also probably hurt).  However, it’s still enjoyable and accessible, something that can’t be said for much of the lo-fi scene.

Noah & The Whale : The First Days of Spring