On a steamy evening, in one of the most intimate venues in Boston, Volcano Choir played a highly intimate and energy driven show....
by Ryan Reading September 18, 2013 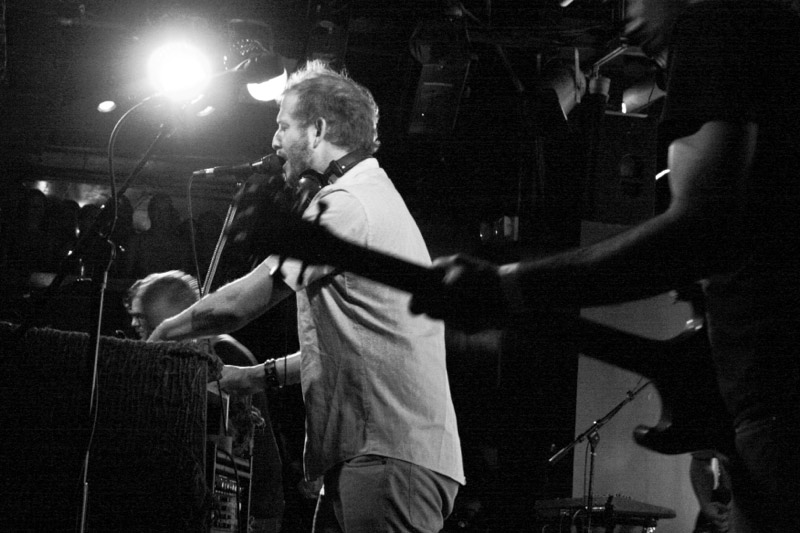 Click here for photos of Volcano Choir at 2014 Primavera Sound in Barcelona, Spain in the QRO Concert Photo Gallery

On a steamy Wednesday evening, September 11th, in Paradise, one of the most intimate venues in Boston, with a sold out crowd made up mostly of freshly moved-in undergrads (and couples), Volcano Choir played a highly intimate and energy driven show that kept up with the standards of this fall’s highly acclaimed tour.

With a notebook in-hand clutched like a bible, adorning massive DJ headphones, Justin Vernon walked out on stage with his band of six.  He strode up to his burlap-wrapped podium (or pulpit), and slapped down his notebook (or hymnal). That’s when the noise began.

Over the course of the show there was not a moment silence.  Each song segued beautifully into the next, swelling in and out of a flowing tempest of feedback, synths, guitars, and Vernons. 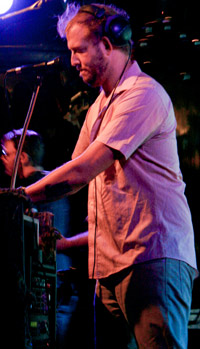 Overall, the show lay somewhere between a Baptist sermon, early ‘00s post-rock show, and poetry jam.  Those hopeful to see Justin Vernon quietly strum “Skinny Love” on his acoustic guitar may not have been granted their wishes, but surely witnessed a hell of a show.

The band kicked it off with a fairly predictable “Tideray”, the first cut on their newest record Repave (QRO review).  Opening with a dimly lit organ note, the five-minute track quickly gained speed, resulting in an explosive peak that would characterize many songs of the night.  By the end of the song, with Vernon pointing wildly at the audience while gripping the side of his ‘pulpit’, it truly felt like a rowdy religious service/political rally.

After a roar of applauds, The Radiohead-esque “Island, IS” took The Paradise back to Volcano Choir’s 2009 experimental record Unmap.  At first, Vernon appeared naked without his guitar, but his on-stage ‘hand-antics’ quickly became one of the most entertaining parts of the show.  With most lyrics on Unmap being completely unintelligible, some context was achieved in the live setting by Vernon’s hand waving, pointing, and times, flapping.

Early in the set, Volcano Choir broke out their first new and unreleased song: “Valleyonaire”.  The song ended with the band’s one and only guitar solo of the night.  After the song, guitarist Chris Rosenau (who was the chattiest Choir member of the night) addressed the crowd with an explanation of the song’s name: “So Vernon names these songs, and he goes, ‘Yep, this one’s called the Valleyonaire’.  So I say, “Wait what’s a Valleyonaire?  ‘Well… It’s like a Millionaire, except with valleys.’”

Next came “Keel”, which sounds like Volcano Choir’s nod to “Heysátan” by Sigur Rós (QRO live review).  The track focused more on Vernon’s voice, and very well may have been the most preach-y of the night.  Coming together as a single orchestral instrument, the band rose and fell masterfully with Vernon’s vocals.

Boston received a nice treat with the rarely played “Blue Ni Ni”.  One of the first songs that Volcano Choir ever played together, it was explained by Rosenau that the “Blue Ni Ni” “Still has no home.”  At the song’s crescendo, the band came together to chant “Cigarettes and the Middle West” with the audience.

The undisputed crowd favorite of the night was Repave’s single “Bygone”.  While the energy level and attentiveness of the sold out audience was high throughout the show, the Paradise erupted (pun intended?) as the band and crowd belted out “Set Sail!” together during the song’s peak.

The final highlight of the night was Unmap’s “Still”.  The song is easily confused with Bon Iver’s heavily autotuned track “Woods”.  “Still” tickled every experimental post rock bone (if that’s even a thing) in the building with a massive, overdriven, Explosions in the Sky (QRO live review) peak.

Overall, the show had a completely different vibe than any other Justin Vernon project, while still encapsulating much of why he’s become so popular.  The falsetto was there, the catchy intertwined guitar licks were there, but the most impressive aspect of the show is how clean the complex and multi instrumental songs were delivered.

As they were with Bon Iver, many of Vernon’s new songs continue to focus on love, relationships, and lessons learned.  However, with Volcano Choir, Vernon has clearly shed much of the underlying somber sadness that he is known for, and has been creating music that’s derived from a happier place.

Stripped down, Volcano Choir sounds and feels like what it would sound like if Vernon returned to the isolated cabin where he wrote For Emma, Forever Ago (QRO review), except this time, add success, bros, and a lot of pot and whiskey.  Vernon has recently mentioned that Bon Iver might have run it’s course, and after seeing Volcano Choir, it’s very clear why this is the case.