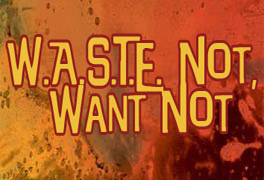 With thousands of online users waiting eagerly for an unannounced start time, there was no less than a bombardment of activity on the W.A.S.T.E. servers at 9:07 AM on Wednesday, April 9th.  Few would be successful, many were left asking questions, and all were certainly frustrated with what has routinely become one of the internet's most difficult experiences.

Here's basically how it went.

What we knew:
-tickets were going on sale some time on April 9th
-the first leg of the tour's tickets became available somewhere around 8 AM ET
-they never last more than 15 minutes

What we didn't know:
-actual start time
-how the W.A.S.T.E. site would handle traffic
-if we'd actually get anything for our effort

Considering that tickets for their last American tour went on sale as early as 6AM, we were prepared to abide by any schedule.  Using various software programs to keep an eye on the ticket page, we were able to avoid waking up before 6AM.  Once we did, however, constant surveillance was the M.O. for any hint of when it would be time to rumble.

7 AM passed with no sign.  8 AM passed, too, with nothing happening.  Consider that the spring leg of the tour had tickets released at 8 AM, it was a bit of a downer at this point because there would be no consistency in the model, and it became clear that we were at their whim.

All of the sudden, at 9:07 AM ET, the W.A.S.T.E. ticket page changed.  Most of the summer U.S. shows were on sale in an instant.  Depending on the venue, pit, reserved, and general admission tickets were all split up into different URLs, so the first bit of strategy came into play.  You could go for pit, but if you miss out, your reserved spot would suffer.

Using several different browsers apiece, we decided to add as many (four) pit tickets to each of our carts for the Mansfield, MA (Tweeter Center) show.  As soon as we got them into our carts, the gridlock hit.

The server wouldn't respond past "Connecting to tickets.waste.uk.com…"

Great.  With half of several key purchases made, we were in a hellish limbo.  When could we seal the deal?

We were so close, yet so far.

All of the sudden, one of our browsers actually connected and we managed to check out with four pit tickets.  Excited, nervous, and skeptical, we waited for that confirmation email.  We had won, but we weren't done.

We were trying to score as many tickets as possible.  For the next hour, we were constantly refreshing – hoping to complete our other purchases and claim success. 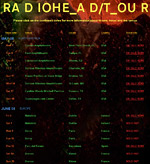 The W.A.S.T.E. system was so log-jammed, it's questionable as to why they would hold such a massive free-for-all on so many shows at the same time.  Surely they've noticed this mind-boggling surge in traffic before and would adjust their practices this time around.  No such luck.

By the time we were able to actually connect to the server again, around 10:30 AM ET, we got the good news that our carts were completely empty and that the pit tickets we had added to them over an hour ago were long expired.  Back to square one.

We attempted to score some pit tickets again, but there was just no way.  They were gone a long time ago.  And now, the reserved seats were sold out too.  Now what?

Within seconds, scalpers had tickets listed on eBay and StubHub for $500+.

Given the Wild West feel of it all, we just kept trying anyway.  With a bookmarked link behind the "Sold Out" text, we kept refreshing the reserved seat page.  After a while of blind determination, a miracle happened.  Available tickets popped up.  We quickly added two to our cart and checked out as quickly as possible.  Somehow, we managed to score the pair after it was "sold out".  So we kept going…

Again, more seats were available.   We added two more unspecified actual seat number tickets to our cart, but it shut us out this time, saying "Only one purchase per show per customer".

So we jumped onto another computer, madly hit refresh until the seats came back up.  We snagged two more.

By this point, we had eight tickets and we were convinced that we had not only survived the insane ticket grab, but had something to show for it.