<img src="http://www.qromag.com/wp-content/uploads/2008/11/wearescientistsnov22.jpg" alt=" " />We Are Scientists returned home for an exuberant set, peppered by some of the funniest stage banter this side of Tenacious D. ... 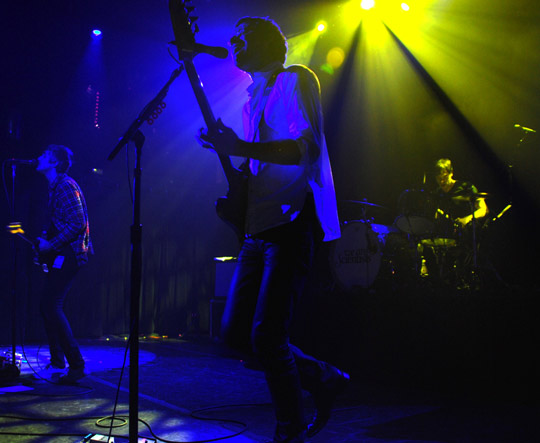 We Are Scientists returned home for an exuberant set, peppered by some of the funniest stage banter this side of Tenacious D.  While guitarist/singer Keith Murray & bassist Chris Cain met at Claremont College in California, they’ve since moved to (where else?) Brooklyn, and were happy to be back in the Big Apple when they played Fillmore New York at Irving Plaza on Saturday, November 22nd.  Musically, they were upbeat and energetic as they played a roughly half-and-half mix of tracks from their 2006 breakthrough With Love and Squalor and this year’s follow-up, Brain Thrust Mastery (QRO review).  Bantering, they ranged from tiny ducks to The Killers as Murray & Cain joked from start to finish. 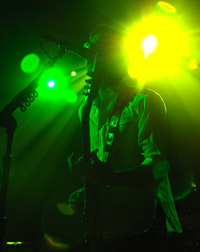 While the set as a whole was relatively balanced between Squalor and Brain, the start was dominated by the newer Brain, while the end by the classic Squalor.  Opener “Impatience” started things off on a relatively grand note (and did reflect the feelings of many in the tightly-packed crowd at Irving Plaza), with “Let’s See It” sparking things even more.  The disco-dance elements of “Lethal Enforcer” made it something of a poor fit, as it simmered the show down, but was bookended 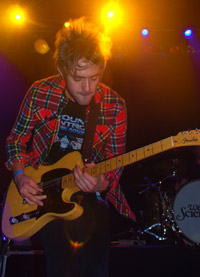 by Murray & Cain’s first bantering.  Before “Lethal”, Murray told the crowd that he was trying to look casual as he unwrapped himself from some cords, but when he then said that all he really wanted to say was that he was glad to be here, Cain interjected with his critique (“’Cause I know you’ll forget later, like a puppy that’s peed on the couch, say it now or you’ll never remember…”) that Murray really should have said more.  And after “Enforcer”, Murray had to ask, “Normally, I wouldn’t say this, but did you [an audience member] just say, ‘What about the duck?!?’”  Cain told Murray that he’d received a pint-sized duck (“And pint-sized is generous – this thing could be the eraser on the end of a pencil”) from a fan earlier – with which Murray had to ask if this was a real, living duck… 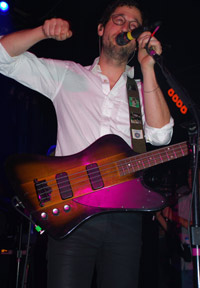 Waterfowl out of the way, We Are Scientists hit up their first Squalor track, the record’s excellent first single, “Nobody Moves, Nobody Gets Hurt”.  Murray then told everyone exactly how glad they were to be home, “You don’t know – you simply don’t know – the horrible places we’ve seen…”  He did refrain from naming those places, 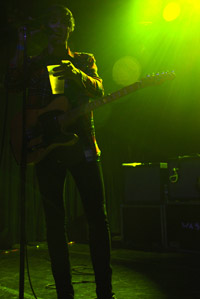 because some of the people in the crowd were probably from there.  Cain added in some comments about professionalism & unprofessionalism – the latter may have been in reference to your photographer (who didn’t see there was a photo pit until the middle of the “Lethal”, and was shooting frantically when in it, to make up and get what he could…), but could also have been about Murray, when the guitarist had asked for thirteen minutes to fix something (which he thankfully didn’t need all of), “I can’t tell you how many times, in the middle of a set, this guy’s making horn sounds, keyboard sounds…”

The pressing disco-dance of Brain’s latest single, “Chick Lit”, played better than “Lethal”, but from there, the band went on a run of four Squalor numbers.  While “Can’t Lose” was a little leaden, squandering some of the momentum, the bombastic “Callbacks”, the expansive “This Scene Is Dead”, and the rhythmic “Inaction” delivered an arc of rock.  The show reached a midpoint high point with Brain’s excellent and evocative first single, “After Hours”, after which Murray said, “It’s a cruel, cruel fact of this world that we can’t have this show every weekend.”  Murray & Cain’s banter had largely died down up until then, only to rebound then with that comment and Murray’s subsequent acknowledgement, “Some of you are shaking your heads, saying, ‘Who the fuck are these guys?!?’”

While Cain called the following “That’s What Counts” “as low-key as it’s going to get” and urged people to “put your fingers inside of the person next to you”, the high disco-dance was a little weak.  After the departure of charter drummer Michael Tapper and moving to electronica/dance EMI imprint Astralwerks (The Chemical Brothers, LCD Soundsystem, Hot Chip), We Are Scientists added some electronic elements to their music, and not always for the better.  Still, the more ominous new “Tonight” brought an interested and effective atmosphere to Irving, leading well into Squalor’s downtrodden refrain, “Textbook” (on the set list – QRO photo – it was supposed to go “Textbook”, then “Tonight”; the band wisely flipped them up live).

Brain’s “Dinosaurs” returned the speed to the set as it lead into the band’s breakthrough Squalor single, “It’s a Hit”.  The band returned from a short encore break with Murray saying, “We were three blocks away in a taxi, and you guys got the better of us…”  We Are Scientists finished with three more Squalor tracks, the grand and anthemistic “Lousy Reputation”, speed-rhythm guitar “Cash Cow”, and the one-and-only “Great Escape” (okay, there are about a hundred other songs with that name…), where Cain took off his guitar, got a long length of mike cord, and dived into the crowd, traversing deeply into all of it before returning to the stage.

We Are Scientists playing “It’s A Hit” live at Fillmore New York at Irving Plaza in New York, NY:

The crowd wasn’t ideal; a mixture of too young and too old, a lot of them seemed to be new to shows.  The set-up of the stage floor at Irving Plaza (QRO venue review), wedged on one side by the entrance, the other by a cordoned-off section for equipment, meant it was pretty tight going (and was made worse by all the jackets and over-dancing).  Cain even chided the crowd for shouting “One more song!” only about five songs into the set (Murray adding, “There must be three more songs we know…”); the crowd returned to the refrain during the encore break (where We Are Scientists did play three more).  They also cheered not only for the openers when asked to by the band, but also for The Killers (Murray then letting them know, “You guys don’t owe The Killers anything!”).  During the encore, Cain told the crowd that they were only about sixty percent ‘professional level’:

If you guys were actors, pretending to be an audience … here’s what I would expect from a professional audience, going down the list:

3)    Somebody gets in a fistfight that ends up in a romantic relationship that ends with a vampire bite.

Of course, Cain said as a professional band, they had failed, too.  Yet it all somehow came together in a rocking and rollicking night. 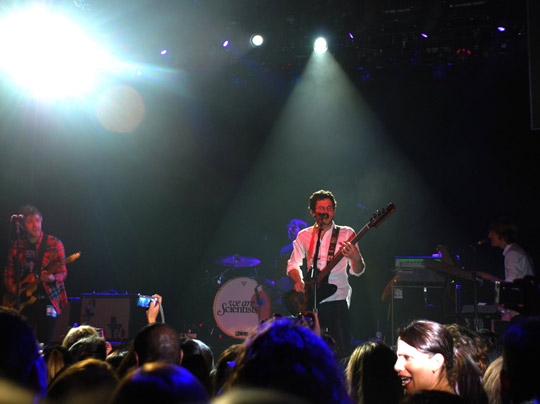