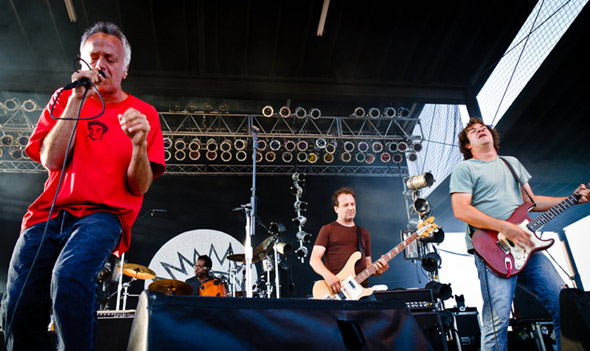 The sun did shine upon the Les Schwab Amphitheater as the people drove in from all over the Northwest to see Ween paint the town of Bend brown on Saturday, July 2nd.  It is the one Northwest appearance for Ween this summer and the residents of Bend that were looking for some sugar got some.  It was overheard from one of the vendors at the awesome Thai food cart, Spoon (amazing and very fresh Thai steak salad), “All you Portland folks can drive out here for once.  We drive to Portland to see everything.  Here in Bend this is our one awesome show of the year.”  That said, any serious Ween fan wouldn’t mind taking as many people as they could fit in their car, share the gas and have a nice, scenic, three hour drive from Portland for a top notch, two-and-a-half-hour performance.

Ween attracts a crowd that are some of the nicest people you ever would want to meet, even if some of them may scare your Mama.  From jocks with Boognish tattoos and punks rocking mohawks to people in their late forties/early fifties drinking up some of the bottles of NW wines available for sale at the venue.  Ween has been making music for 25-plus years now and those who were listening to them in college are now bringing their children.  A kid of about five years old perched atop her Mom’s shoulders was seen giving the devil horns to her much older dancing companion with a look of frenzy in her eyes.  People set up blankets while they waited, drinking and eating food available from the carts on site.  There was an intimate feel at this venue, perhaps due to the sun, the lush grass, the fine company and the fucking ass-kicking music of Ween.

From their opener, “Transdermal Celebration” (Quebec, 2003), to the very last song of the night, “Roses Are Free” (Chocolate & Cheese, 1994), the band took us on a joyride through ten of their albums.  Although they didn’t play anything from The Pod, their second studio album, the set list was a well-represented cross section of seventeen years of their career in a two-and-a-half-hour set.  With such a massive quantity of amazing songs to choose from this is no small task indeed.  And the tightness and proficiency of Ween is a sight to behold, as individuals and as a band.  It is as if they could play with their eyes closed.  The passion for the rock seeped out onto the stage from every member.  Dean Ween said after melting the frenzied crowd with an epic slowed-down, warped and distorted “Poopship Destroyer” that it was, “Weird playing in fucking daylight,” but no one was complaining.

Following a sizzling version of “Ice Castles” (White Pepper, 2000), which culminated with Gene, Dean and Dave Dreiwitz amidst a dense fog in a guitar circle jerk, there was a surprise nugget, a song that confused the jovial crowd for a moment.  Some thought it was a Dio cover or maybe a Rush, but it was “Final Alarm”, a song that can only be found on a few live recordings.  Lots of hard, brown and crunchy guitar complete with some of Deaner’s awesome lovemaking faces.  It was nothing short of amazing.  Although not from this concert, there is a nice version of “Final Alarm” from a 1997 public access show that is believed to be one of the first live performances with the current lineup, Gene and Dean Ween, Claude Coleman, Dave Dreiwitz and Glenn McClelland:

Another cover from the boys later that day was David Bowie’s “Let’s Dance”, which couldn’t have been possible without Gene’s versatility and showmanship. 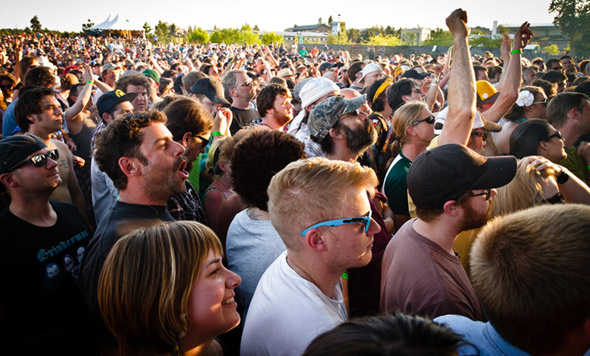 Ween continued slaying the audience with crowd favorite “Baby Bitch” (Chocolate & Cheese, 1994) followed by “Birthday Boy” (GodWeenSatan: The Oneness, 1990).  Together, those songs tell one of Gene’s stories as “Birthday Boy” was written for a girl and that girl later turned into a “Baby Bitch”.  “Birthday Boy” came to its end with the band bathed in blue fog, which smoothly transitioned to one of emerald for “Buckingham Green” (The Mollusk, 1997).

Every character Gene Ween sings as, every note Dean Ween plays, each pounding beat of Claude Colemen on the drums, every bass line of Dave Dreiwitz and every keystroke by Glenn McClelland creates a cohesive and versatile smorgasbord of talented goodness.  As any long time Ween fan can attest to, it has been a pleasure to watch Ween grow and hone their craft over the years.  We have all grown up with them.  And as Ween continues on their journey through the rift, it seems certain that Gene and Dean Ween will fulfill the dream they set forth when they were playing music in eighth grade.  We will be watching them as old men tearing it up on stage.  All hail the Boognish.