<img src="http://www.qromag.com/wp-content/uploads/2009/10/whyoct15.jpg" alt=" " />Yoni Wolf's WHY? saw the significance of the songs and, indeed, the character of the musical endeavor as completely transformed. ... 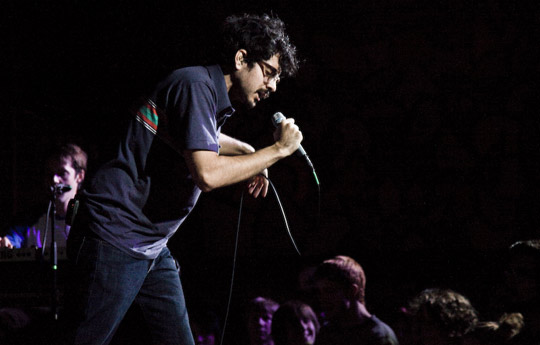 Click here for photos of WHY? at Williamsburg Waterfront in Brooklyn, NY on July 11th, 2010 in the QRO Concert Photo Gallery

Click here for photos of WHY? at The Social in Orlando, FL on December 12th, 2009 in the QRO Concert Photo Gallery

A grand wood-floored room situated in a quiet residential neighborhood, Portland’s Wonder Ballroom is a cozy alternative to the chilly, out-sized Crystal Ballroom.  Aside from the strange no-man’s land that quarantines the under-21 portion of the audience, it is in a room that feels comfortable even when crowded and tends to encourage audiences to lose themselves in whatever feeling the band has on offer.  It’s perfectly natural to experience diarrheic side effects at a psychedelic showcase or to feel an uncontrollable urge to cuddle with your neighbor when the music kindles a romantic spirit.  At WHY?’s recent appearance on Thursday, October 15th, though, that dynamic was reversed and the mood of the crowd seemed not simply to determine the band’s energy level or song choice but to provide a context that completely transformed the significance of the songs and, indeed, the character of WHY? leader Yoni Wolf’s musical endeavor as a whole. 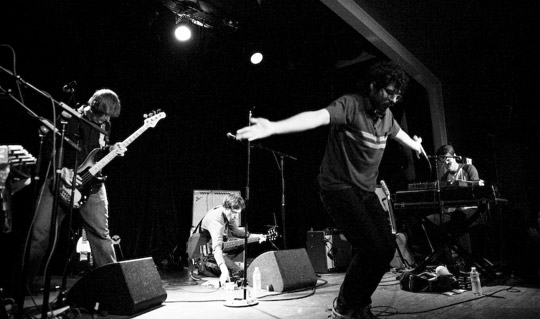 After excellent opening sets from No Kids and Mount Eerie (QRO photos), a sea change could be felt in the room.  Factions of the crowd who had attended the show for the openers discreetly slipped outside to smoke cigarettes and discuss the many remarkable things about the evening so far: No Kids’ remarkable confidence and charisma – elements absent from their appearance only three weeks earlier at Portland’s MusicFest NW (QRO recap); the powerful six-piece, two-drummer band performing Mount Eerie’s music and the unexpected presence of Tara Jane O’Neil as touring guitarist in said band.  In the spaces left by these fans, late-comers were streaming onto the floor and the polite, receptive mood that had dominated the room – and which would seem the typical reception for an Anticon artist and a former member of the obscurantist Clouddead collective – gave way to an air of hot anticipation. 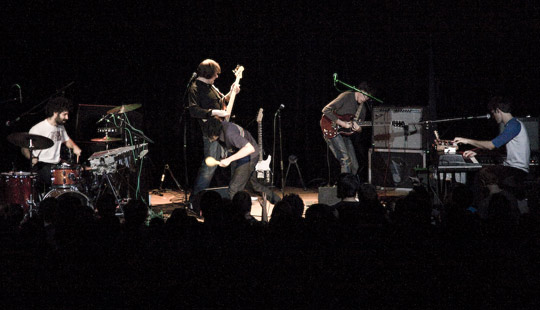 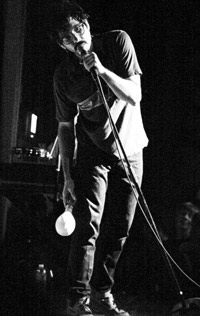 When, after a long break, WHY? finally appeared on stage, the applause was tremendous, yet the disconnect between the artist and audience was immediately palpable.  The eyes of the crowd looked eagerly to Wolf, fully expecting that he would, in the most traditional sense of the role, accept the responsibility of the MC, the master of ceremonies.  Like a disco ball spins in place, catching and refracting light, so the MC deflects personal attention even as he personifies and reflects the mood of a room.  For his part, Wolf seemed acutely aware that this party wasn’t really his party.  In response, his set veered between frustration with his role and frantic attempts to bridge his audience’s preparatory buzzing with the party that would doubtless continue in his absence.  Addressing this awkward state of affairs, Wolf issued an open invite to the crowd: pool party at HoJo’s!  The crowd roared appreciatively but clearly had its own party to attend to. 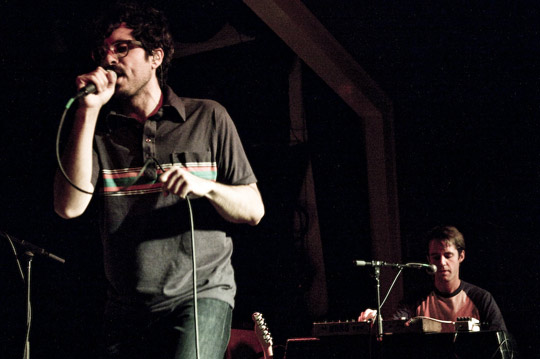 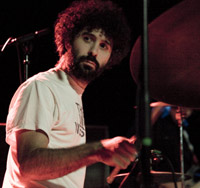 Throughout the set, Wolf seldom ever faced the audience, choosing instead to address his drummer at stage left or pianist (introduced as Conor Oberst – QRO live review – for obvious reasons, involving his cheekbones) at stage right.  Despite performing the neat trick of uttering lyrics that raised guffaws from the venue’s security detail, Wolf’s vocal performance in this setting gave his lyrics a harsh edge unfamiliar from WHY?’s recordings.  Crowd favorite "The Hollows" was transformed from a meditation on the pursuit of self-definition through self-abuse into a long-winded insult spat into the wind.  On the topic of self-abuse, the allusions to Why’s most reliable theme and ostensible favorite pastime – masturbation – grew darker with each repetition.  "Into the Shadows of My Embrace" is by no means a highlight of Eskimo Snow (QRO review) but before such a demanding crowd, it came across as a desperate bid for attention and little else. 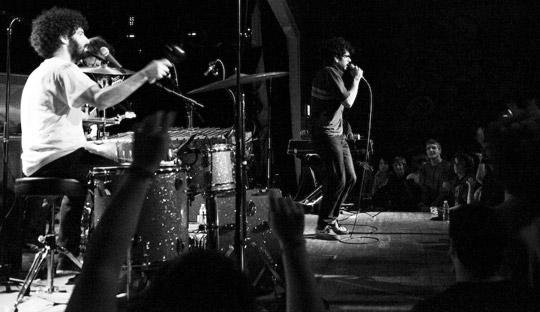 The title of WHY?’s 2009 release Eskimo Snow promised an experiment in subtlety, precise definitions and unearthed nuance.  Thanks in part to the record’s ever-shifting near-psychedelic arrangements, it delivered on the promise.  By contrast, WHY?’s current touring lineup reduces the music to its barest elements and re-interprets it in a no-frills rockist manner that – as appropriate as it may be to end a song about masturbation with a gloriously excessive guitar solo – does little to bring out the thematic subtleties in Wolf’s lyrics.  Yoni Wolf has the potential to deliver revelations in language and meaning.  For the moment, though, he seems resigned to oblige his audiences’ chanted demands: "Snow!  Snow!  Snow!" 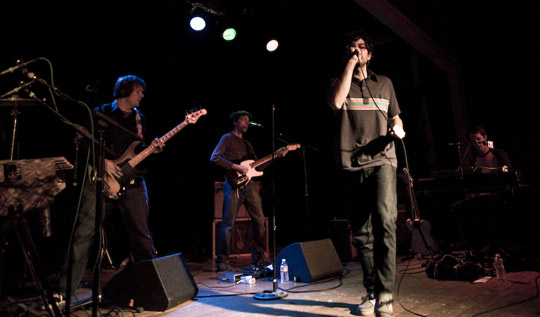