<img src="http://www.qromag.com/wp-content/uploads/2009/07/wildmoccasinsjune20sm.jpg" alt=" " />The kids were alright when Wild Moccasins came to Brooklyn. ... 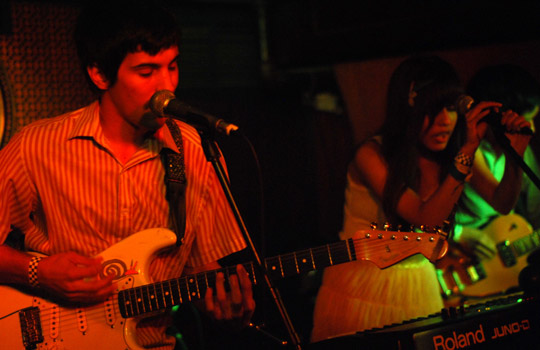 Upon first seeing Wild Moccasins, it’s easy to focus on exactly how young they both look & sound.  None of them seem to come even close to six feet in height (plus the two shortest are the two at the front, singer/guitarist Cody Swann & singer/keyboardist Zahira Gutierrez – and they’re a couple!  How cute…), and despite there being five of them, they didn’t fill up the cramped ‘stage’ at the Union Hall’s basement venue (QRO venue review) on Saturday, June 20th.  And their music has an alt-poppy pep and spark that could make a college kid feel old.  They’re kind of everything you don’t expect from Houston, Texas.  But the band wisely doesn’t play against that grain, rather with it and building upon it, for a fun evening.

Playing dates they set up themselves across the eastern United States (earning just enough to pay for gas along the way), Wild Moccasins had their second night in Brooklyn, at Park Slope’s Union Hall.  Opening for the alt-country The Loom & Cotton Jones wasn’t a perfect fit, and the crowd wasn’t too thick, but the band didn’t let that dampen their spirits.  And what spirits they have, with energy to spare (but not overdone) on opener “LNTV”.  But that’s not all they are, as the following “Spanish and Jazz” brought a nice sway & change, with Gutierrez taking lead vocals.

Though “Spanish” is on their self-released EP, Microscopic Metronomes, the record actually hews mostly to the peppier sound of non-record “LNTV”.  However, the band has grown since putting Microscopic out, to the point where they only played two tracks from the record at Union Hall.  “Calendar” nicely combined the sway of “Spanish” with some higher, sweeter pop, but the following “Cake” was a little too similar, and the otherwise nice song was marred by too many tempo changes.

But the band did bring it back with their best three pieces, to close things out.  First was the bigger fun of “Psychic”, a clear stand out, but then the band threw in a new number at the last minute (so new, so last minute, it wasn’t on the set list – QRO photo), which was a little darker, even a little more – dare one say it? – mature.  The ‘big finish’ saw them return to Microscopic with “Fruit Tea”, the EP’s own stand out track, which was a great ender with outsized, catchy fun.

Yes, Wild Moccasins look like they might not be tall enough for some rides down at Coney Island (if there were any rides left there…).  Yes, you might be surprised that the 21+ Union Hall let them in (though you don’t have to be of drinking age, if you’re in the band – Union Hall even still gives ‘em the sweet pog-like drink tickets), despite Swann’s ‘stache.  Yes, they make Ra Ra Riot (QRO spotlight on) or friends of theirs (& The Q) Harlem Shakes (QRO spotlight on) look old – Gutierrez, in particular, is almost like Ra Ra Riot’s Alexandra Lawn’s (QRO interview) younger sister (okay, not as stunning as Lawn – QRO photos – but really, who is?…).  And yes, their sound isn’t some grizzled Texan, but fresh and new alt-pop.  But it’s so sweet, and they’re so sweet, who cares about age? 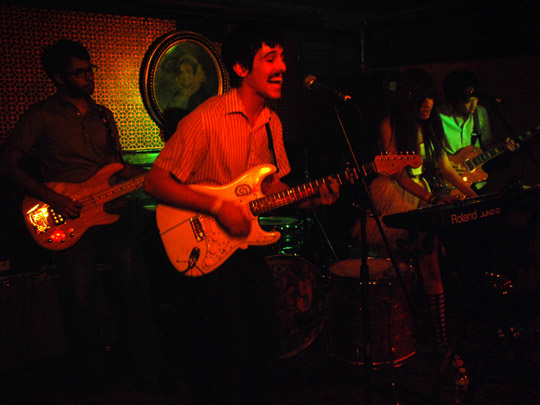 Weather Pending : And How!