<img src="http://www.qromag.com/wp-content/uploads/2011/03/wildnothingmar1.jpg" alt="Wild Nothing : Live" />With a gentle pause from the pervading winter rain, Wild Nothing drifted through the sparse streets of Portland impressing upon a hopeful... 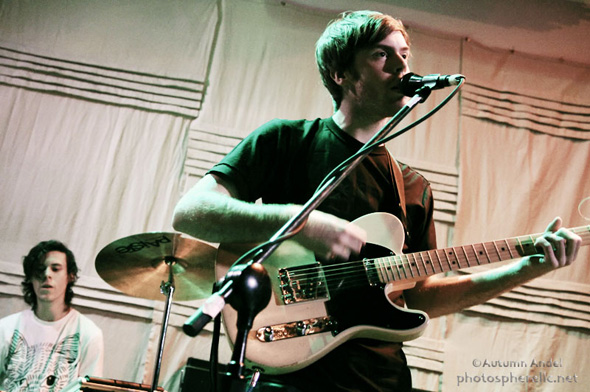 Click here for photos of Wild Nothing at 2012 LouFest in St. Louis, MO in the QRO Concert Photo Gallery

Click here for photos of Wild Nothing at Pier 84 in New York, NY on August 9th, 2012 in the QRO Concert Photo Gallery

Click here for photos of Wild Nothing at 2010 Primavera Club Festival in Barcelona, Spain in the QRO Concert Photo Gallery

Click here for photos of Wild Nothing at 2010 Truck Festival in Steventon, U.K. in the QRO Concert Photo Gallery

Click here for photos of Wild Nothing at Governors Island in New York, NY on June 19th, 2010 in the QRO Concert Photo Gallery

With a gentle pause from the pervading winter rain, Wild Nothing drifted through the sparse streets of Portland impressing upon a hopeful stage at the Holocene this first night of March.

Venturing to the back room, the merch table for co-headliners Wild Nothing and Abe Vigoda was spotted sitting quietly off to the side and unattended.  In addition to the usual band fare were a couple cassette tapes appropriately displayed as a throwback to the ‘80s.  The four-piece opened as headliners this time to a buoyant room filled comfortably to the brim.  Their taking to the stage was matter-of-fact with lead singer Jack Tatum approaching the mic with an, “Alright.  Hello.”

Their introductory verse “Rabbit Feet” delighted the listeners even though it was sonically muddled and clashed with the space that enveloped them.  The audience didn’t seem to mind the insipid white walls and blaring amber lights gently robbing the opening sounds of a fitting atmosphere.  The tunefulness of the breaking song simply overpowered those details. 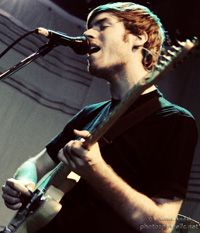 The beaming lights were kindly cut for the following piece, “Live in Dreams” leaving purple, green, and deep red waves, a palette that complimented the ‘80s-infused music.  Sadly, however, the vocals were still smothered in the mix and completely lost.  It was so much more apparent this time around that the audience cried “Vocals!” at the break.  Tatum deflected the request to the sound woman and turned his back in preparation for the next song.

Wild Nothing playing “Our Composition Book” live @ Holocene in Portland, OR on March 1st, 2011:

With their third attempt, “Gemini”, all the elements of sound and ambience came together and the show had finally ‘arrived’.  The crowd engaged with dancing and encouragement as they did most of the night.  Favored songs like “Chinatown” and “Summer Holiday” delivered playfulness amidst the wistful nostalgia.  The melodies were infectious and memorable, affecting nearly everyone in the room.

Wild Nothing playing “Summer Holiday” live @ Holocene in Portland, OR on March 1st, 2011: 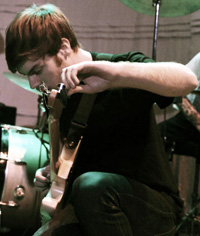 If only it were easy to stay aloft the dreamy swells of the young band.  The set was riddled, however, with more technical errors, among them a broken string and a faulty amp.  Though they played through them handsomely, there was a disruption to the flow that was disappointing.  Perhaps it was because Tatum mostly spoke in ‘thank you’s and ‘sorry’s, but did not engage much more with the audience.  The only performer that seemed interested in the show goers was the bassist, Dane Chadwick, who was sitting in for Wild Nothing after playing drums with his band, Abe Vigoda. 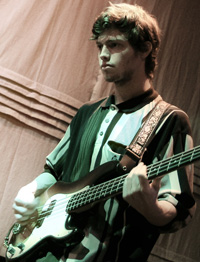 While it was refreshing to hear a live band performing Tatum’s solo project, Gemini (QRO review), some tracks that were inspiring on the album fell short of the same passion on stage.  Tatum’s compositions themselves may have the strength to substitute for personality, but the band is not quite engaged yet in providing that overcompensation live.  Instead of emulating the irrepressible appetite of a band from the ‘80s whose only chance to be heard was when they played out, the formidable influence of computers on Wild Nothing left a distinctly contemporary aftertaste.

Wild Nothing playing “Vulture Like Lovers” live @ Holocene in Portland, OR on March 1st, 2011:

At the close of their set, the group of twenty-somethings slinked off the stage wearily.  When coaxed back for an encore, Chadwick collapsed humorously as he ascended the stairs, symbolic of the feeling that the band’s arms were being twisted to play.  Chadwick learned their last piece, “Bored Games”, on the spot, and then the band bid their farewell.

Wild Nothing playing “Chinatown” live @ Holocene in Portland, OR on March 1st, 2011:

On the way out of the venue, the merch table was encountered a second time and still sat unmanned.  Fans began to gather and wait.  Minutes passed with no relief, punctuating an odd notion of a crowd wanting to engage with a band that brought mostly ambivalence.  Then again, that is much like the air sign, Gemini, is said to be. 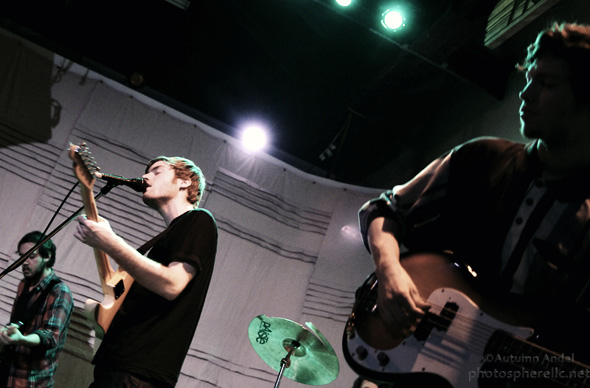