Every December for the past few years, WIRED Magazine has opened a pop-up store in Manhattan, taking over an empty space within frigid walking distance of Union Square’s Holiday Market.  Showcasing all sorts of ‘near future’ techno-junk that you’d be surprised anyone would actually buy (think if the Sharper Image catalog opened a store – wait, they did?  A whole chain of them?  And they folded?  Well, goes to show why this is just a pop-up store), it’s really just a showcase for tech products (kind of like WIRED itself) – like a multi-vendor Apple Store (there was even a new Buick in there, for some reason) without the tech support or well-known iProducts.  But on some evenings, it also hosted RSVP/invite-only holiday parties with bands and free drinks.  For three Wednesdays in a row, December 1st, 8th, and 15th, WIRED Store 2010 on 692 Broadway had three nice parties with Gordon Voidwell, Ra Ra Riot, We the Barbarians and Tokyo Police Club. 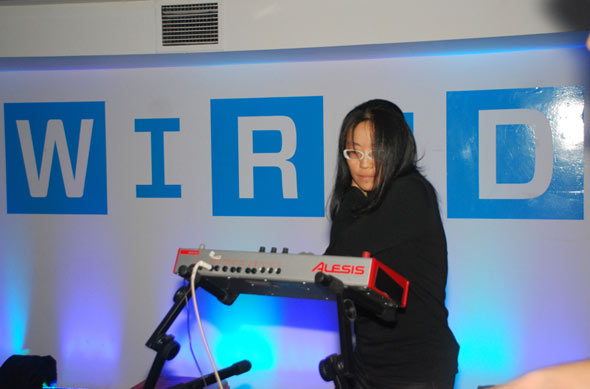 Click here for photos of Gordon Voidwell at WIRED Store on December 1st, 2010 in the QRO Concert Photo Gallery

The first event, on the 1st, was the least-hyped, as it didn’t feature a band that could/will headline the massive Terminal 5 (QRO venue review) or play Letterman, but rather the up-and-coming Gordon Voidwell.  December 1st also faced the most competition from ‘regular’ shows, including Broken Bells (QRO album review), Lykke Li (QRO album review) and even KT Tunstall & Ozzy Osbourne – but did those shows have free Heineken & Silvertap Wines (seemingly the sponsors of all WIRED Store events, as both forms of alcohol were on offer each night), or Back To the Future & the season premiere of Doctor Who(with the newest Doctor) playing on mute?  The holiday party for Girlie Action PR (Tori Amos, Cut Copy, DFA Records, Mogwai, Morrisey, My Morning Jacket, They Might Be Giants, and many more, as well as Gordon Voidwell), it was a great way to get the cheapo lushes in the NYC indie music community to check out Mr. Voidwell – though it did mean that Girlie Action employees (who are not all, or even mostly, girls) had to be relatively ‘on’, as opposed to the devil-may-care unwinding drinking-to-excess, ‘work hard/play 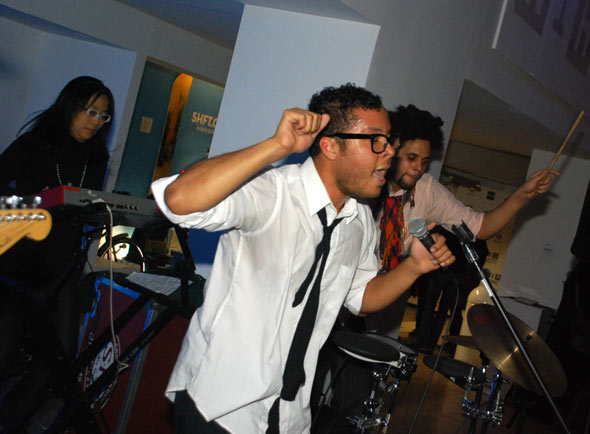 hard’ that is the stereotype of holiday parties.  Gordon Voidwell did provide an energetic and exciting act (even if they all went to Princeton, yet main man had a song about “White Friends” – such as the guitarist?…), the kind that NYC indie types had always meant to see but never had, though they were limited by the placement of the stage in the store – to the side on the main floor, beneath the balcony, only a foot or so off the ground, with relatively poor lighting; the stage was impossible to see from the basement, nearly impossible from the balcony, and rather hard from the main floor if you weren’t up front. 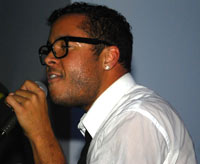 Click here for photos of Ra Ra Riot at WIRED Store on December 8th, 2010 in the QRO Concert Photo Gallery

Click here for all of QRO’s coverage of Ra Ra Riot in QRO’s ‘Spotlight On : Ra Ra Riot’

Click here for photos of Black Gold at WIRED Store on December 16th, 2009 in the QRO Concert Photo Gallery

Click here for photos of Cymbals Eat Guitars at WIRED Store on December 16th, 2009 in the QRO Concert Photo Gallery 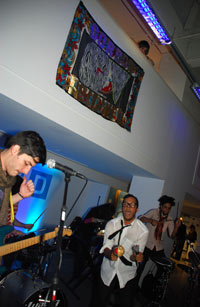 While the physical store was the same on the following Wednesday, December 8th, much else had changed.  Hosting the popular Ra Ra Riot, who had played Letterman the night before (QRO Indie on Late Night TV), the WIRED Store had shifted from the relaxed ‘store with a bar and a small stage’ to a full-on ‘store/event space’, with numerous waiters and other staff (including security & people with ‘Staff’ badges), hors d’oeuvre plates circulated by said waiters, three bars (one for each floor), a coat check, and extra bathrooms – port-a-potties outside in the cold (in addition to meaning that one could not bring your drink with you to the bathroom, more people going in & out caused more cold air coming in – “Keep warm,” as Riot singer Wesley Miles – QRO interview – said).  There was a bathroom inside on the main floor, but it was manned by a member of security telling the ‘regular’ patrons that it was, “Not for you” (no one told the wait-staff that, as they’d direct you to the indoor bathroom if asked).  In addition, there was security preventing ‘regular’ people from going to the balcony, initially very disconcerting if you’d been there the week prior, as the balcony had the only bar then (and the other two bars on the 8th didn’t have wine, because the ‘regular’ people aren’t classy enough to appreciate anything but beer…).  The bar in the way downstairs did make it a much more happening place to be, to go with the ping-pong table (lots of loose balls bouncing around), video games, and coat-check (which had incredibly good-looking staff, even more so than the handsome waiters & bar-staff; all were decked out in white button-down shirts & black ties – ties & shirts loose on the ladies, implying the ‘I just put this on after being naked with the man that these clothes belong to/I could take this off with ease at any moment’ air). 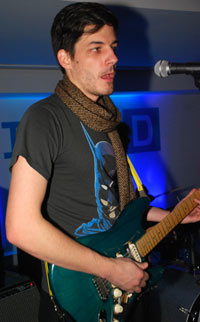 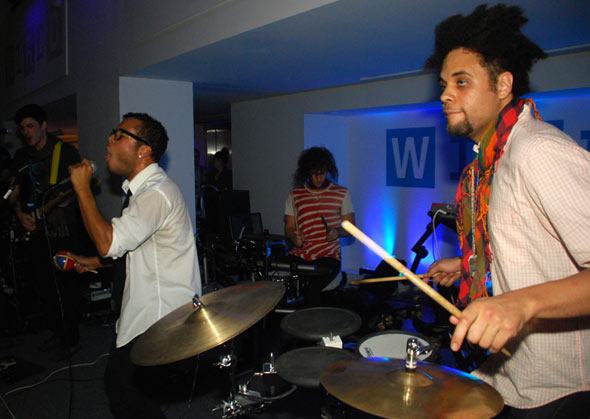 But, despite the appeal of Heineken, attractive staff, hors d’oeuvres, ping-pong, heavy-handed security, and port-a-potties, the main action was Ra Ra Riot (if it felt like there was more waiters/security/‘Staff’ than fans watching the band, that was just because there was so many waiters/security/‘Staff’).  Playing a forty-five minute set (not as long as a regular Ra Ra Riot show, but longer than any in-store – about the length of a good festival appearance), the six-person collective mixed and matched from their two full-lengths, 2008’s The Rhumb Line (QRO review) and this year’s The Orchard (QRO review) – the still somewhat makeshift nature of the WIREDStore stage probably weighted the set list away from the usual tilt towards the newer record, as it’s also grander and more orchestral, so not as fitting with the space.  But amid RRR Rhumb staples like “Ghost Under Rocks” and “Can You Tell?” were also Orchard specialties such as “Too Dramatic” and “You and I Know”, which saw cellist/singer/everyone’s indie-crush Alexandra Lawn (QRO interview) put down her futuristic neo-cello and take up lead vocals, and Miles ended their set high-fiving the crowd. 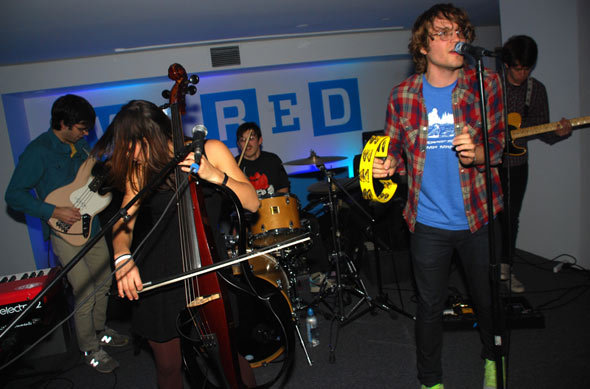 [editor’s note: QRO did our due diligence and asked why Ra Ra Riot scheduled their four NYC dates last September on the exact same four nights as Pavement reunion (QRO review) at Central Park SummerStage (QRO venue review) – turns out that the band is big enough that they should have been playing Bowery Presents’ less-than-intimate Terminal 5, but avoided that venue with two nights at the same company’s Bowery Ballroom (QRO venue review) & two nights at Music Hall of Williamsburg

(QRO venue review), only finding out later on about the conflicting dates, which cost the band & crew their chance to see that Rad reunion…]

Oh, and Ra Ra Riot themselves didn’t mingle in only the hoity-toity upstairs, but posed for pictures with fans after the show until everyone was ushered out by security, and members were even seen going outside to use the port-a-potties…

Click here for photos of Tokyo Police Club at WIRED Store on December 15th, 2010 in the QRO Concert Photo Gallery

Click here for photos of We Barbarians at WIRED Store on December 15th, 2010 in the QRO Concert Photo Gallery

Click here for photos of King Khan & The BBQ Show at WIRED Store on December 3rd, 2008 in the QRO Concert Photo Gallery

Balancing between the ‘free drinks & some band’ of the 1st and ‘too exclusive event’ of the 8th was the WIRED Store show on the 15th, with Tokyo Police Club and We Barbarians.  Like the 1st, it was a music company’s holiday party, this time for artist management company Foundation (Passion Pit, Dr. Dog, White Rabbits, as well as TPC & We Barbarians).  Like the 8th, it was a major band in Canada’s TPC.  In a mix between the two prior dates, there were two bars, on the main floor & balcony – lighter with the security & staff (one dancing member of the crowd admitted to having just walked in off the street, and had never even heard of Tokyo Police Club…), but also had two people wearing masks typing up “honest judgments of your appearance” (made as little sense then as it does now). 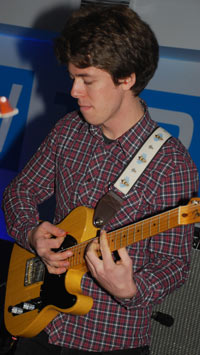 The lack of hors d’oeuvres bothered the hungry (only nuts, popcorn, and chips that looked like potpourri on some tables), the lack of coat-check bothered anyone who’d come in from the frigid cold, but the lack of port-a-potties bothered no one coming out of said frigid cold – at least until you had to use the bathroom, and were forced to wait on a mammoth line (maybe security on the 8th were on to something…). 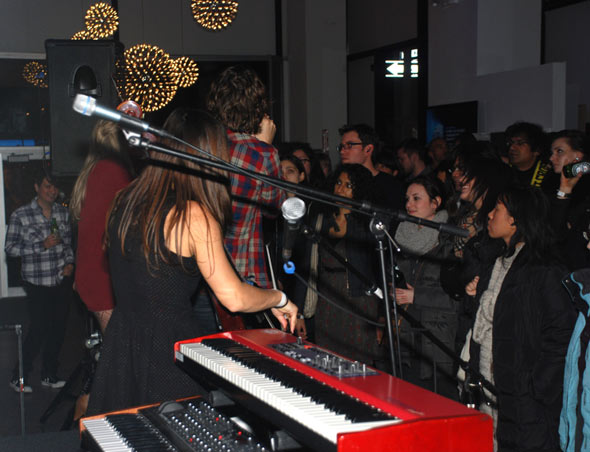 Unlike either the 1st or the 8th, Foundation’s party on the 15th had not one, but two bands, with a strong opening performance from We Barbarians (also had the best sound of all three nights, as WIRED Store 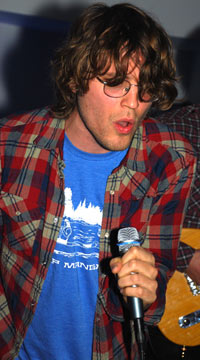 had seemingly worked out the kinks that caused Miles’ mike to drop out during the chorus to one RRR song, causing him to lead the crowd in a sing-along until it was restored).  Tokyo Police Club’s set mainly featured material from this year’s underrated Champ (QRO review) such as opener “Your Favourite Colour” (those extra ‘u’s let you know that they’re Canadian, chump), but also choice earlier cuts such as “Citizens of Tomorrow” and “Your English Is Good”, and a cover of Weezer’s classic & always welcome “My Name Is Jonas” (Weezer would perform the original – QRO video – two nights later at Roseland Ballroom – QRO review).  There was also a number of NYC indie musicians in the crowd, including Nate Martinez (QRO interview) of Thieving Irons (QRO album review)/ex-Pela (QRO spotlight on), half of White Rabbits (QRO spotlight on) in Brian Betancourt, Alex Evan & Steve Patterson (QRO interview), and half of the late, lamented Harlem Shakes (QRO spotlight on) in Todd Goldstein of Arms (QRO album review), Brent Katz of Thunder & Lightning & Jose Soegaard (QRO interview).  Ayad Al Adhamy and Michael Angelakos of Passion Pit (QRO album review) introduced TPC (who’d opened for PP over the summer – QRO photos), joking that they were Foundation interns.  But the biggest appearance, and certainly most surprising in the ‘they’re friends?’ department, was by Hasidic hip-hop phenom Matisyahu (QRO photos), in town for his annual Hanukkah ‘Festival of Lights’ shows (which can’t hold a candle to those at Maxwell’s – QRO venue review – by Yo La Tengo – QRO live review), who joined TPC on stage to close out the show with them playing his “Miracle (The Hanukkah Song)”.

Who knows if WIRED Store sold anything, or promoted its wares as much as was intended – certainly Heineken got some great product placement.  But it was certainly worth negotiating RSVP e-mails, a bitterly cold December, a poor stage and port-a-potties for three hump days in a row of some great acts & free drinks.

Kings of Leon : Come Around Sundown