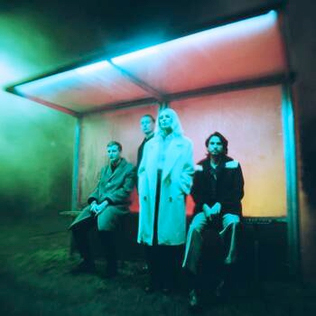 Photos of Wolf Alice at Warsaw in Brooklyn, NY on October 2nd, 2015

Photos of Wolf Alice at 2015 Glastonbury Festival in Glastonbury, U.K.

Photos of Wolf Alice at 2013 Beacons Festival in Skipton, U.K.

London’s Wolf Alice won British buzz with their 2015 debut, My Love Is Cool, including a Mercury Prize nomination. 2018’s follow-up Visions of a Life (QRO review) managed to outdo that, winning the Mercury Prize and proving no sophomore slump. And now comes the wonderfully diverse Blue Weekend, that sees the band go even greater.

It was already known that Wolf Alice could do moving beauty, and Weekend has that in spades on the songs such as the excellent expansive, romantic resign “Lipstick On the Glass” and the heartbreaking empathy of “How Can I Make It OK?”. An album just of that would have been more than enough to satisfy, but there are also change-ups. “Safe From Heartbreak (If You Never Fall In Love)” is high, strumming beauty, restrained like also on “No Hard Feelings”. “Smile” is a press, cutting, beat-driven piece electronica artists would kill for. And “Play the Greatest Hits” brings speedy punk rock that’s almost showing off how much Wolf Alice can do.

So many buzz bands fail to keep delivering, to be remembered only as one-hit wonders or time capsule ‘the future of music’ label in bygone publications. Yet Wolf Alice keep reaching higher & higher.