<img src="http://www.qromag.com/wp-content/uploads/2010/07/wolfparadeexpo86L.jpg" alt="" />Nostalgia and a certain youthful abandon are heavily present on  <i>Expo 86</i>, but what should we expect from a band who are returning to their roots,... 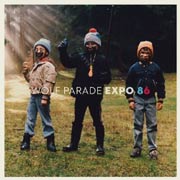 The 1986 Vancouver World Expo was a magical time.  Miles Davis, Johnny Cash and The Beach Boys performed; a Floating McDonalds and the world’s largest ice hockey stick were all on display.  This attracted a bevy of global icons including, but not limited to: Princess Diana, Bill Cosby and Jacques Cousteau.  Another group of attendees were the then pre-adolescent members of Wolf Parade, who as rumour has it, actually met at the Expo and agreed to meet up some 17 years later to form a band.

Nostalgia and a certain youthful abandon are heavily present on Wolf Parades third record, Expo 86, but what should we expect from a band who, after 20-plus years of knowing each other and performing together, are returning to their roots, and revisiting their past.

Expo 86 was recorded live – and it retains that gritty and raw feeling.  Self-described "maximalists," Wolf Parade release a torrent of sound that penetrates the eardrums and splatters itself on the listener’s aural canvas.

Wolf Parade is a solid indie rock band.  Consistent and steady – though not always exceptional – Expo 86 is the group’s longest record to date, with a rhythmically sound collection of tracks that have a natural flow.  While at times the lack of variegation is vexing, Wolf Parade makes up for it with complex instrumentation and surprising lyrical depth.

Expo 86 suffers from divided songwriters syndrome.  Spencer Krug (also of Sunset Rubdown) and Dan Boeckner (also of Handsome Furs) take turns writing and singing, and the record flits back and forth between Krug songs and Boeckner songs.  There is almost a sense of competition between the two – but this is not necessarily a bad thing.  The rivalry creates an urgent feeling, one that is probably shared by both listener and vocalist.

Though Krug and Boeckner may not be of the same mind when it comes to song writing, both agreed that the album had to be ‘danceable’.  Thankfully Wolf Parade’s interpretation of ‘danceable’ does not include synths, looped drumbeats and rapper collaborations.

Expo 86 has a magnetic sense of energy – with frenetic and chaotic arrangements, Wolf Parade push the boundaries of indie music a little bit farther.  Despite hailing from the land of maple leaves and ice hockey, there is a coarse Americana vibe present on the album, and many times the vocalist seems to be channelling The Boss (QRO live review) himself.

Expo 86 is an unadorned and un-ironic indie rock album.  With heavy guitar solos, idiosyncratic drum patterns and ambiguous lyrics, Wolf Parade delivers.  They put their own mark on what’s perceived to be indie, and then pass it along for consumption by whoever encounters it next.