<img src="http://www.qromag.com/wp-content/uploads/2008/08/wolfparadeaugust1.jpg" alt=" " />For the second night in a row, Wolf Parade produced an intense and electric show to a massive crowd....

For the second night in a row, Wolf Parade produced an intense and electric show to a massive crowd.The Montreal, Quebec band struck it big back in 2004 with their debut, Apologies to Queen Mary, but principal songwriters Spencer Krug and Dan Boeckner then took time off to work on their own projects.  This year, though, the Parade returned with At Mount Zoomer (QRO review), and their energy hadn’t let up.  Playing a second show at Manhattan’s massive Terminal 5 on Friday, August 1st (after the Thursday one sold out), the band more than satisfied the audience with their extensive show.

Their first night in New York, Wolf Parade reportedly played virtually the entire same set list as in the show before that, in Philly.  But they really changed up the order for the Friday night crowd, though still played all of Zoomer and almost all of Mary.  While they opened with Mary’s pressing “Dear Sons and Daughters of Hungry Ghosts”, it was Zoomer that really got the early exposure, as its one-two start-off, “Soldier’s Grin” and “Call It a Ritual”, followed up.  The pair was still a strong dichotomy between a brighter Wolf and a darker one, but both saw their frenetic energy turned up in presence of the crowd.  This was only taken another notch up by Zoomer’s stand out, “The Grey Estates”, whose boldness was catchy, even toe tapping.

Wolf Parade then returned to Queen Mary with its opener, “You Are a Runner and I Am My Father’s Son”, and its saloon-style rhythm made it a fan favorite – something that was further heightened when the band slid seamlessly from it into Mary’s high-speed “Fancy Claps”.  That piece’s slightly wistful nature was kept up by Zoomer’s “Language City”, but with a bright catch and fan clap-along portion.  The incisive and sharper “An Animal In Your Care” may have lost a touch of that momentum, but it all came back and more when the Parade delivered their eye-opening breakthrough Mary single, “Shine a Light”.  There was a time when that song – and especially songs that sound like it (see: Tapes ‘n Tapes (QRO album review) – seemed too ubiquitous in indie circles, but this “Light” was a welcome return.

Things had to slip a little bit after that, and following Mary’s hit single up with the stop-start “Bang Your Drum”, probably Zoomer’s weakest track, might not have been the best move.  But what was a good move was another seamlessly slide, from “Drum” into the crashing “California Dreamer”.  No, this latter half of the show, before the encore break, wasn’t quite as strong as the first, but Wolf Parade had built up such a reservoir of energy and good will, one couldn’t help but be extra interested in Zoomer’s groovin’ change, “Fine Young Cannibals”.  And the band went into the break first with the finisher to Mary, the uplifting and explosive “This Heart’s Fire”, and then with the finisher to Zoomer, the crashing, smash-down epic “Kissing the Beehive” (though it wasn’t at the ten-plus minute epic length as on record). 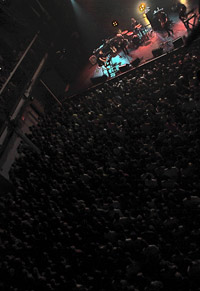 Having played every song on Zoomer, Wolf Parade could only return to the cheering crowd with Apologies.  “Grounds For Divorce”, kind of the unheralded hero of that record, got its just due live, while “It’s a Curse” really served as a lower-tempo bridge between that and the night’s show-stopping finale, “I’ll Believe In Anything”.  While the three-level Terminal 5 (QRO venue review) is often too big a place to see an indie-rock show, the five-piece really made it work from start to finish, eschewing audience banter, which would have been lost on much of the crowd, in favor of no-holds-barred energy (and utilizing the venue’s excellent lighting and sound systems).  After the incredible Apologies To Queen Mary and the following excellent side-project work by Krug in Sunset Rubdown (QRO live review), and by Boeckner in Handsome Furs (QRO photos – from Terminal 5), At Mount Zoomer did have lofty expectations placed on its shoulders, something almost no record could quite hold up (and there was that boom and bust in ‘Wolf’-named bands in the intervening time as well…).  But live in New York, it was a Parade to put Macy’s to shame.