<img src="http://www.qromag.com/wp-content/uploads/2011/08/wormburnerjul24.jpg" alt="Wormburner : Live" />There's more than a place for a band like Wormburner in today's music world. ... 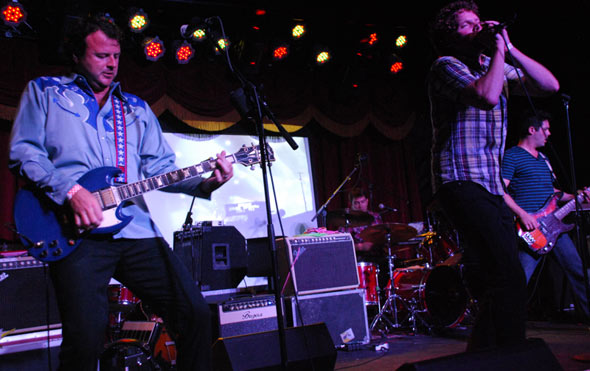 Sometimes, it can feel like all the new-fangled stuff in music can bypass the old.  Chillwave, post-dubstep, indietronica – whatever happened to good ol’ fashioned rock ‘n’ roll?  It doesn’t help that the older rock bands are still around, crowding out any new acts.  And the internet has made getting your music out there very twenty-first century – CDs are dead, vinyl is nostalgia, and nobody pays for music anymore.  But there’s still a way forward for a band like Wormburner, who burned through Brooklyn Bowl on Sunday, July 24th.

[Editor’s note: Wormburner came to the attention of QRO through a unique mix of old & new marketing.  When the near-three decade-old Camper Van Beethoven played industry festival South-by-Southwest in 2010 (QRO recap), they sold ‘ad space’ during each one of their songs – a girl on roller-skates holding up a sign. Somebody bought a song for Wormburner (the band insists it wasn’t they who did it), and QRO caught a photo of it during Camper’s official SXSW show (which was otherwise marred by difficulties with the venue, making for a one-of-a-kind experience – QRO recap).  This led to your correspondent and Wormburner connecting via Twitter, and when they got a slot opening for post-Camper act Cracker (QRO spotlight on) – Camper’s singer David Lowery formed Cracker, the two bands toured together to SXSW, and Lowery produced Wormburner’s first record, A Hero’s Welcome – set up your correspondent at the show.  From poster board to Twitter…] 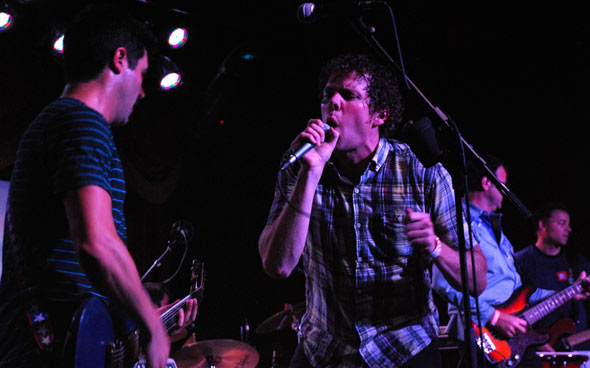 Opening for the veteran ironic alt-country act Cracker (QRO photos) at a music venue-cum-bowling alley (QRO venue review), Wormburner was faced with a decidedly older crowd that was anything but hipster or Williamsburg – there was even a girl in a cowboy hat like the one Liz Lemon won from Kiss FM.  But Cracker’s David Lowery came out in a cowboy hat (QRO photo), so it was fitting.  Despite hailing from the borough, Wormburner are anything but a hipster band – they look older than the usual Williamsburg twenty-somethings, and like they work with their hands rather than computers of trust funds.  Their latest, Placed By the Gideons, was even recorded in New Jersey (horrors!…), with references to the other side of the Hudson built in.  The closest the evening came to indie stereotype was singer Steve Henry congratulating all the couples that got married on the first day that gay marriage was legal in New York State (not that any were there…). 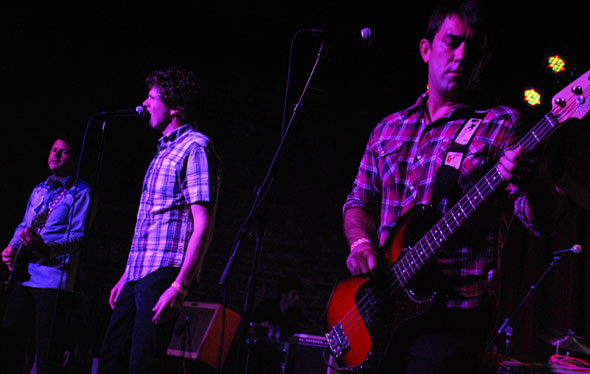 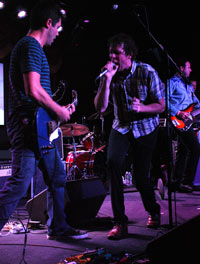 Not that Wormburner was out-of-place, as their sound resembles that of Brooklyn’s own The Hold Steady (QRO live review), still a major favorite of hipsters.  The American pub-rock was inflected with something more, however – certainly less out-and-out talk-sing than The Hold Steady’s Craig Finn – a bit of a ‘workingman’s punk’ flavor (think The Garden State’s own Gaslight Anthem – QRO album review), along with an alt-country irony found in the headliner, Cracker.  Two of the band’s best songs directly talked about NJ – “Jersey Central (Power & Electric)” and closer “The Interstate”, but they also had a self-described “spaghetti western” in the penultimate “Pike City Proper”, plus a rare performance of the hidden track on their second record, “Breaker Breaker”, featuring a guest appearance by the Ryan Brothers of Gordon Gano & The Ryan Brothers.

There probably weren’t a lot of indie music blogs & websites covering the show, and Wormburner’s next might have been out in Wantagh on Long Island (a benefit on August 10th with Deer Tick – QRO photos in Brooklyn) – home of the un-indie Nikon at Jones Beach Theater (though any venue that can have the Flaming Lips & Weezer on stage together – QRO photos – can’t be bad…).  Wormburner might not be creating a new, nonsensical-sounding music style compound word.  But there’s more than a place for them in today’s music world.