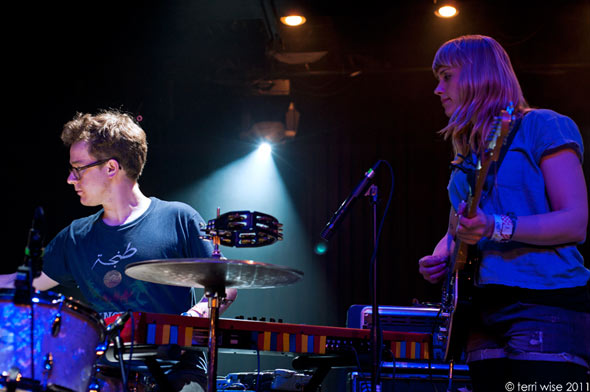 It’s curious how quickly simple can get complicated.  The neat cleanliness of a bare bones group can be absolutely delightful, but when it comes time for a live show things can get a bit messy.  After all, two people have a limited number of hands at their disposal with which to strum or drum.  If they resist the urge to add touring members or play with a track, they run the risk of producing a slim, almost Reader’s Digest set.  Some duos embrace that call for simplicity (see Matt & Kim – QRO spotlight on) and others crank it up to 11 in the face of such paltry obstacles.  Wye Oak is most definitely the latter.

The Baltimore pair of Andy Stack and Jen Wasner brought their special blend of dreamy fuzzy folk-ish pop to the picturesque Uptown Theatre in Kansas City on Wednesday, October 12th.  During the set Wasner mused that they had, “Never played in a gingerbread house before,” but the venue, which mimics a Mediterranean courtyard, proved a perfect setting.  Headliners Explosions In the Sky (QRO album review ) were set to take the stage later, but from the crowd already assembled, it was hard to believe that Wye Oak were merely the openers.

Off the back of their latest album, Civilian (QRO review) Wye Oak played a relaxed ten-song set.  Wasner handled vocals and guitar, using delay, reverb and distortion to take listeners on a nighttime drive through a deluge of rain.  As in, she managed to achieve Explosions In the Sky-levels of copious fuzz-noise while wielding a measly one-third the weight in equipment.  Percussionist/keyboardist/one-man band-man Stack uses the right half of his body for the kit, while letting his portside handle the bass line, chords, or whatever other textures the song requires.  The one-handed rhythm section keeps the beat austere, but the application is spot on.  The result is a sound that is lush, deep, complex, but elegantly simple in construction.

As expected, the earnest yearnings of “Holy Holy” caught the ear, while other tracks that seemed to play bit roles on the album, like opener “The Alter”, which lent itself well to Wasner’s haunting vocal stylings and the abrupt interruptions of her guitar.  The audience on Wednesday night was treated to a swim through layers of glowy texture, broad brawny beats, and a simplicity that made you wonder just how Wye Oak manages to fit so much into such a small operation.

The Sea and Cake : The Moonlight Butterfly