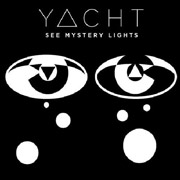 Even for dance/electronica, YACHT has always stood out, has always been different.  Part of that owes to the outsized stage personality of founder Jona Bechtolt, busting out geek dance moves non-stop, along with such audience participation as mid-set Q&A sessions.  But since he dissolved The Blow, YACHT’s music has become an interesting mash-up of beat-friendly dancetronica and more experimental techtronics.  2007’s self-released I Believe In You. Your Magic Is Real (QRO review) first kicked these doors open, sometimes pitch-perfectly, sometimes middlingly.  Follow-up See Mystery Lights (now on famed NYC electronica label DFA – LCD Soundsystem, Hot Chip) doesn’t add to every track, but where it does, YACHT has made a compelling sort of ‘gospel-tronica’.

The major addition to YACHT on Mystery, partner Claire L. Evans, is more just making official a partnership that had already been standing.  The really new element is the town of Marfa, in the west Texas desert.  Home to the still-unexplained ‘Marfa Mystery Lights’, mysterious moving lights in the sky, Bechtolt & Evans were so entranced with the small town (also something of an artist collective, and burnt-out hippie commune) that they decided to record there.  The influence of this kind of unexplained ‘magic’ is actually more pervasive on Mystery than on the previous Magic, as the pair converted quasi-religious mantras into electro-pop tunes.

Click here for photos of YACHT at Fun Fun Fun Fest in Austin, TX on November 8th, 2008 in the QRO Concert Photo Gallery

Where this works, it works very well, nowhere more so than in openers “Ring the Bell” and “The Afterlife”.  The building beat of “The Bell” turns the tones into electronica with the spirit of a revival tent, and there’s a straight-faced smile thrown in on “The Afterlife”.  That quasi-religious fervor also lifts tracks like “Psychic City” and “Don’t Fight the Darkness”.  If only it were present throughout.  While early numbers “I’m In Love With a Ripper” and “It’s Boring/You Can Live Anywhere You Want” hold up fairly well as dancetronica (the former, “Boring” half being superior to the latter, “Anywhere” side), later pieces like “Summer Song” and “We Have All We Ever Wanted” are just run-of-the-mill dancetronica, even feeling like they go on too long, despite them being two of the shortest tracks on Mystery.

It all comes to a head at the end.  First is “I’m In Love With a Ripper (Party Mix)”, an inferior & unnecessary remix of an already tech-dance song.  But then is “Psychic City”, stripped to just its vocals – weird, but also rather charming, after a fashion.  YACHT’s desire to keep at least a foot on the dance floor ground, while their heads are in the clouds above Marfa, is understandable – but they should delve even further into the Mystery.