Yeasayer – Live in the U.K.

<img src="http://www.qromag.com/wp-content/uploads/2012/12/yeasayerdec3.jpg" alt="Yeasayer : Live" /><br /> They used to be a well-kept secret but there’s a real buzz surrounding Yeasayer these days and Manchester’s Academy 2 was packed...

“Good evening Manchester!  Good evening Manchester!”  The electronic voice that started the Yeasayer set sounded a lot like GLaDOS from Portal.  It was a good choice to open a show for a band whose avant-pop ethic allows them to draw influences and ideas from a wide range of texts and for whom irony is second nature.  The crowd fell silent as the band arrived on stage.  Expectations were high.  Perhaps there would be cake. 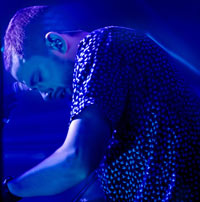 these days and Manchester’s Academy 2 was packed for their performance there on Monday night.  Whether you describe their output as psychedelic pop or experimental rock or choose to invent some other esoteric nomenclature of your own – the band themselves apparently prefer Middle Eastern-psych-snap-gospel – their music is an exercise in genre defiance which confounds any attempt at classification.  What was most striking was how well the group transfer the eclectic spirit of their studio work to live performance – with electric drums, bass and guitar to the fore and the band members stepping adroitly between their instrumental, technical and vocal duties, they seem happy to let the samples and loops 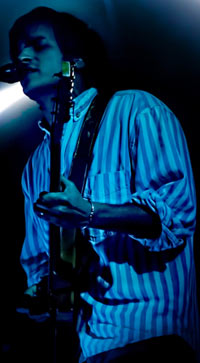 and technical wizardry drop back a little in the overall mix while giving free reign to the excellence of their playing and singing.  The overall result is a collage of musical motifs drawn from a diversity of musical styles and genres – during the course of the set they drew on elements of prog rock, punk and 1980s synth-pop plus a hundred others, all layered together seamlessly and delivered with a remarkable intensity which had large sections of the crowd dancing but equal numbers simply standing and admiring.  They weren’t big on chat, preferring to let their music do the talking, but their commitment to their material and their art was very apparent – if this was pop then it was very good pop played seriously well.  Their set was largely drawn from the recent Fragrant World album (QRO review) – a highlight was the ridiculously catchy “Reagan’s Skeleton”, where the sound evokes both early R.E.M. (QRO album review) and the Scissor Sisters (QRO live review) in equal measure, but earlier material, including the anthemistic “Ambling Alp” from Old Blood (QRO review), was also featured.

A.C. Newman – Shut Down the Streets