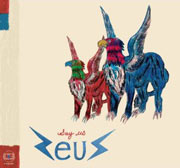 From opening track “How Does It Feel”, Toronto’s Zeus captivates listeners with an upbeat sound full of joy and jubilation.  The lively piano, slick bass lines and animated vocals all fit perfectly in line with what the band calls “pop and roll.”  As their debut album Say Us progresses, so does the bubbly feeling that goes along with it.  It becomes impossible not to sway to dreamy guitar riffs or tap along to the beat of the drums.  When even the lyrics become sombre or downtrodden, it’s impossible not to feel happy listening to this record.

You see, Zeus founders Mike O’Brien and Carlin Nicholson seem to have learned a thing or two about melody from their days of backing Jason Collett (QRO spotlight on).  The hard work earned from years spent immersed in the Toronto music scene hasn’t hurt either.  The first half of the best friends’ latest project’s debut album, Say Us, is ripe with a piano-based classic rock sound.  The piano may give way to the occasional distorted atmospheric indie rock number, but it always returns in style.  Reminiscent at times of Peter Gabriel-era Genesis, the record holds listener’s attention from the get-go.

The next few songs on Say Us shrug off a lot of the aforementioned piano-infused classic rock sound, and opt instead for a synth heavy new age atmosphere.  From moments of ridiculous precision – “River By the Garden”, for instance – to others of organized chaos on “You Gotta Tell’er”, this string of songs takes Say Us in a bit of a different direction.

The album comes into another new light on a different track about how things feel, called “I Know”.  From this point on, Say Us is a strict blend of all the different styles explored earlier on.  Piano and synth work together, as do distortion and clarity.  Emotion becomes the adrenaline that keeps the music going, on the likes of “Heavy On Me” and others.  Say Us may quiet down on closing track “At the Risk of Repeating”, but the album refuses to lose its upbeat, attention-grabbing style.

Whatever sound this Toronto four-piece seems to go for – whether it be ‘70s-era rock ‘n’ roll, hazy blends of alt- and indie-rock, or even psychedelic – it seems to work for them.  Say Us breathes a fresh air of vintage over a brilliant foundation of pop and roll.