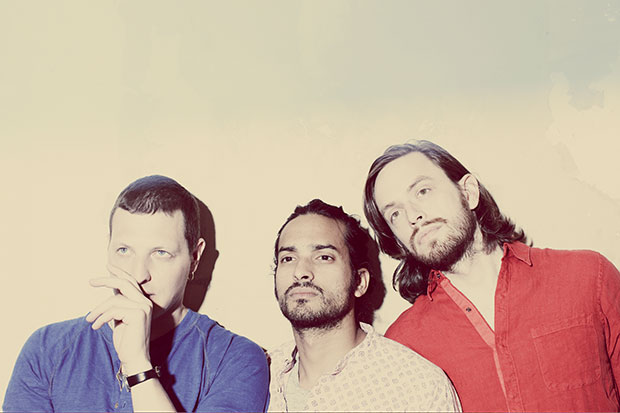 Just before the release of Fragrant World (QRO review), Anand Wilder of Yeasayer talked with QRO.  Gearing up for their next tour (as well as first a small hometown date at Music Hall of Williamsburg), Wilder talked about Fragrant World, playing Fragrant before it came out (including on Conan) vs. after, playing everywhere from Brooklyn to Poland (where apparently they’re huge), new drummer Cale Parks, their light shows with the likes of Myles Mangino and Casey Reas (for The Creator’s Project), what happened to his camo jumpsuit, and more…

QRO: What brought about doing the show at Music Hall of Williamsburg (QRO venue review)?  It seems like a small venue for you at this point…

Anand Wilder: Oh, yeah – that’s what makes it exciting.  We play capacity-appropriate shows all the time, so it’s really fun for us to play a smaller venue – especially one that we are so familiar with, because we played there probably a year or two into the first album.  So it’s nice to be able to play an intimate show like that, especially in our hometown.

We actually just did a couple shows at The Lexington in London.  Those were some of the most fun shows that I’ve played in the last five years.

QRO: On this upcoming tour, are you playing your biggest venues to-date?

AW: Probably.  I would say so.  But it’s the kind of thing where, by the end of the tour, you reach the height of the venue capacity.  I think, when you start off with an album, you kind of backtrack a little bit, and then kind of build your way up again.  Like shifting gears in a car – you have to back to first gear, sort of.

QRO: How was the June-July tour?  That was your first in a while, no?…

It was fun to kind of experiment with the new songs without people knowing the songs.

AW: Yeah – it was good.  It was fun to kind of experiment with the new songs without people knowing the songs.  So we could mess around with the arrangement, and then we could also test out the songs on these virginal ears, to see which songs got immediate reactions, what parts were a little bit slow, what parts killed the audience.

Hopefully, by the time the album is actually out, we can have a more honed show.

QRO: And how was Europe in July?  Had you ever played Poland and/or Finland before then?

AW: Yeah, we have played both of those places.

Actually, Poland is our number one market… [laughs] Which we discovered about two years ago, at that very same festival, Heineken Open’er Festival.

We had no idea what to expect, because I think Poland operates on kinda like Soviet era – I think the black market for downloading mp3s is just the same as bootlegs before the Berlin Wall fell down, you know?  So we had no way of gauging how popular – we sold probably two CDs in Poland, but we arrived in Poland two years ago to chants of, [in Polish accent] “Yea-Sey-Yer!  Yea-Sey-Yer!”  And everyone knew all of our songs – we were just in shock…

So actually playing that Polish festival on July 4th was the first time – we’d been touring for about two or three weeks – and that was the first time that I got ‘shivers’, my spine was tingling, just from the sheer thrill of masses of people singing along to every song, and just being so excited – ‘Ah, right, that’s why I do this, this is what it’s all about…’

QRO: Will you be playing more off of Fragrant World on this upcoming tour that you did in June-July, since it will be out?

But it’s exciting for me to be able to play – we leaked the album last week, two weeks ago, whatever it was.  And I’ve been seeing more stuff online, people recognizing the songs now, being able to get with the songs.  I’m really excited to play a show at Music Hall of Williamsburg – hopefully the people there will have heard some of the new songs, and be excited about them.

Really, it’s only until the album comes out, properly, where we can accurately gauge the interest in certain songs.

QRO: How did making Fragrant compare with making your prior two full-lengths?

AW: Well, it was really, mostly a change of atmosphere.

For the first album [All Hour Cymbals – QRO review], we were all working day jobs in Brooklyn/New York City; completed the album in between, working in our basement.  And the next album [Odd Blood – QRO review], we were all on a record label, we had enough money to rent a house upstate, and we just kind of ‘hunkered down’ in the house in the middle of winter for three months, and got to use all this awesome equipment that this guy Jerry Marotta had.

And this one, we were like, ‘Oh, you know what?  We’re gonna stay in New York.’  And we kinda led normal, ‘domestic’ lives, and went into the studio like it was a job, every day, and then we came home, and were home for dinner.  So there’s a real atmosphere difference.  It kind of led to being much more organized – you’d say, ‘Okay, we’re gonna get in at eleven AM, and we’re gonna start on this, and we’re gonna spend five hours on it, and we’re gonna move on to something else…’

QRO: Was there less pressure on this one, since it was neither your debut record nor the follow-up to a successful debut?

AW: Um…  I never really feel any pressure.  I feel pressure from like, the other guys in the band, to make good, pressure from myself, but the idea of external pressure – it’s such an intangible thing, unless you’re reading every single piece of publicity about the band.  I’m not really privy to what the general public thinks about Yeasayer – I just hear good things from fans, who come up to after shows, or people that we do business with (our lawyer, our publicist, interviewers…).  I don’t know what the ‘pressure’ would actually be.

I have anxiety, but not about that… [laughs] I have anxiety, just in terms of like, ‘Okay – will I be able to write another song?  What am I gonna write about?’  And then that usually goes away once we sit down and actually do it.

QRO: What brought about the shift to a four-piece with ‘only’ one drummer?

AW: We like to change things up.  It’s kinda fun to be able to work with different musicians.  I actually met [new drummer] Cale [Parks] through our previous drummer, Ahmed [Gallab], and I knew he was looking for gigs as a touring drummer, and I was like, ‘Oh, this guy fits with our aesthetic,’ so we picked him up.

The other two guys that were working with us, Ahmed and Jason [Trammell], were awesome, great musicians, amazing personalities.  I think Ahmed has his own project called ‘Sinkane’ (QRO live review) that I’m really excited to see him take that project as far as he can go with that.  I think being in Yeasayer would have kind of always prevented him from focusing on that, on his own project.

But yeah, I think Cale is a great new fit.  He kills it on the drums, and he’s a good, hard worker, too.

QRO: How was premiering “Devil and the Deed” on Conan (QRO Indie On Late Night TV)?

AW: Now that was nerve-wracking! [laughs]

Because that was a song I think we’d played a couple of times live, but it was really exciting, something that we wanted to do.  Because the Conan appearance was coming a year-and-a-half after Odd Blood came out, so we didn’t really feel like playing “O.N.E.” or “Ambling Alp” or “Madder Red” or “I Remember” – whatever the singles were.

So we had this great opportunity where we said, ‘Okay – let’s play a new song.  And what’s it gonna be?’  [Singer] Chris [Keating] had a couple songs, I had a couple songs, and I was like, ‘I think this one’s gonna be the most immediate – let’s do it.’  It kind of forced us to really work hard at that particular song.

Plus, I think our record label was not very happy about that, because it was a song that was not on any record that was out – it didn’t really help sell records… [laughs]

AW: Builds buzz!  Yeah, I think that’s kind of a thing we’ve always tried to stay on top of – what can we do to build buzz?  It’s not about traditional forms of publicity.  ‘Alright – let’s leak these songs, and have awesome videos to go along with them; that’ll make people excited.’

I guess that’s what people expect from us – that’s the pressure that’s put on us, to constantly outdo ourselves in terms of visuals, or, you know, means of publicity…

QRO: How do you decide and create the visuals for your show?

AW: The visual side is more Chris’ department.  He went to RISD [Rhode Island School of Design] – he’s got a whole knack for that kind of thing.

This particular lighting design that we’ve been using for the last few months was designed by Myles Mangino, and he’s this amazing personality who has been in the music business for thirty years.  He’d just tell these ridiculous stories about Nirvana, The Pixies – he’s on tour with Dead Can Dance right now.  He just came up with this cool lighting.

Just like we’re interested in new pedals and new guitars, new software, he’s like, ‘Oh, check out these new lights!  They’re called Sharpies – they’re like lasers, but they hit these parabolic woks that are in the background…’  And it’s just so cool to have someone who’s so excited about lighting.

So he’s on another tour right now, so we’re working with one of his friends, who just picked up where he left off.

Hopefully, for the next tour, we’re gonna be working with Casey Reas, an artist through The Creator’s Project.  The Creator’s Project usually does collaborations between musicians and visual artists.  It’s usually stationary – they usually pick a city (QRO recap of Creator’s Project NYC 2011).  But we’re hoping that we can take some Creator’s Project stuff and take it on tour, and do some kinda interesting stage design, lighting, projection.  So that’s gonna be exciting – and that’s coming up for the official tour, once the album is out.

‘Yeasayer Creates a New Kind of Stage’ for Creator’s Project: 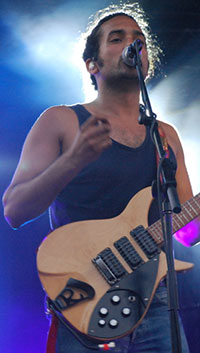 QRO: Finally, what happened to the camo hunting jumpsuits you used to always wear on stage? 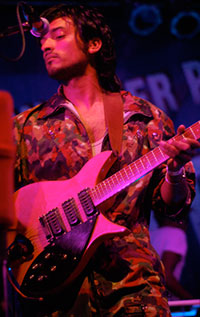 That was my early Odd Blood era costume.  And it’s very convenient to wear the same thing every day – you don’t have any surprises.  You know exactly where to put clip your gear into your back, and you put your thing in your pocket, your pic goes there – but you wear different clothes, and everything gets messed up.  I’ve just been a little bit lazy in my stage outfit.

It’s also good to just get into your ‘stage persona’ to have a costume.When you do music growing up, you never really felt like you were the character until you put on that costume…