When you happen to be in a very creative environment, it is very difficult to stay still. The current pandemic situation has become a challenge for those to overcome... 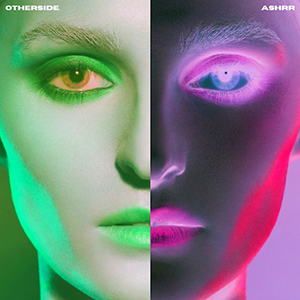 When you happen to be in a very creative environment, it is very difficult to stay still. The current pandemic situation has become a challenge for those to overcome when you have ideas you want to express.

We have seen many cases in the last year of musicians trying to keep their activity no matter what, in different ways: The Church’s Steve Kilbey offering a weekly acoustic Instagram gig with many oldies and newbies, or New Order’s Peter Hook involved in different initiatives to help his road crew, as not only Covid but also Brexit has hit the British artists very hard.

Another case is that of one of our favourite bands of the last year, L.A.’s ASHRR. After the feisty “WAVES” (QRO review) and the melancholic “Dark Eyes” (QRO review), the trio has released an optimistic mid-tempo, “Otherside”, a track that has something to do with the current global situation:

“I have not seen Ethan [Allen] or Steven [Davis] since our last show which was Feb of last year. However, we have managed to write and record all new music virtually and we’ll soon be able to regroup and start playing this new music live!”, explained Josh Charles, keyboardist/guitarist/many other things, in a short conversation with yours truly.

“Otherside” keeps the vibe of carefully crafted songs the band has put out in the last year, an idea that is prior to confinements, masks, general elections et al: “Otherside” began prior to COVID with most of the track written and some dummy lyrics,” revealed Charles. “Five months into 2020, I pulled this song out from the folder of new material we were working on, and I started working on it some more at my home studio, and Ethan and I transferred files back and forth and tracked more guitars, synths, etc. We brought in our friend Blair Sinta who is one of the best drummers on the planet to play live drums but other than his drums, we played all the instruments. We collaborated on the lyrics in mid-summer and the song really wrote itself. Steven recorded his vocals at his home studio and then we started mixing the song.”

The bass and the guitar that start the song clearly announce a more upbeat song, compared to “Dark Eyes”, even if at first it seems that the instrumentation is similar. The other trait that stands out is the set of lyrics, more optimistic and with the desire of going back out and see the world again, about which Charles continues: “Ethan sang some dummy lyrics on the demo back in Dec of 2019 that sounded like he was singing “Meet out in the open / Come out on the other side.”  Of course, that was prophetic and stayed with us months into the pandemic, and we said this song feels necessary right now and we are all clinging to this idea of getting back to real life and seeing our friends and family, etc.”

Sonically, the song is another proof that ASHRR don’t leave a stone to turn or a sound to be processed, a feeling to experiment. As usual, it’s hard to pinpoint where those sounds come from and Charles doesn’t want to reveal much, even though he admits that, “’Otherside’ has a modernist feel sonically, and is more focused on guitars than synths. The vibe of the song really dictates the sound of it in the sense that we love Britpop and psychedelic music from the ’60s as well as post-modern rock.” Bands like DIIV, The Jesus and Mary Chain, The Verve and some others are mentioned and it’s clear that this experimented trio delves into the most sonically dense side of those bands to come up with the best song possible.

“Otherside” is yet another gem in ASHRR’s repertoire, and the timing couldn’t be better, with the hope of jabs to fight the pandemic and the perspective that the worst in this situation (as well as the political one the US) is behind us.

“We feel this is the perfect time to release the song,” concludes Charles.

Listen to “Otherside” on Spotify: spotify:album:5veAp9kKxqBeHkerXWJlQ0