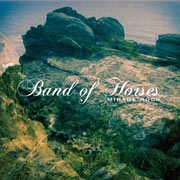 Benjamin Bridwell broke out in 2006 with the amazing Everything All the Time, a personal alt-country opus ahead of its time (by a few years), but since then his Band of Horses have been getting bigger & more polished – for good & ill.  2007’s Cease To Begin (QRO review) took advantage of the better studio facilities that Everything‘s success enabled, but 2010’s Infinite Arms (QRO review) was altogether too polished, lacking some of what had made Band of Horses connect in the first place.  Bridwell wisely dials back the production at least somewhat on Mirage Rock, for a record that reconnects & revives this modern alt-country star.

One’s post-Arms worries about Mirage are assuaged almost immediately in the opening chords to starter/first single "Knock Knock", a bright, pressing piece that also presages a record both brighter than early Band of Horses, but also more engaging one than Arms.  Bridwell is upbeat through most of Mirage, such as the youthful cheer "A Little Biblical", country hepstepper "Electric Music", and adding more energy to improve the Infinite formula on "Feud".  Even the best of the softer pieces are smiling, such as the really nice relax of "Slow Cruel Hands of Time", or even the sweetly enjoyable (if not terribly original) preceding "How To Live".

Conversely, sadness or even just too-softness can drag Mirage down a bit.  "Shut-In Tourist" is a bit too sweet and soft, while the acoustic twang to "Everything’s Gonna Be Undone" and penultimate "Long Vows" aren’t Bridwell’s strong suit.  Plus, closer "Heartbreak On The 101" comes dangerously close to Conor Oberst/Bright Eyes (QRO live review) talk-emotion.

Middle piece "Dumpster World" is acoustic for the first half, before going electric for the back half – a dichotomy Bridwell did so utterly well on break-through Everything single "Funeral".  "Dumpster" doesn’t work as well as "Funeral" – but what does?  Band of Horses just keep on rolling.

Antony and the Johnsons : Cut the World