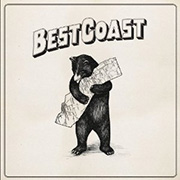 Click here for photos of Best Coast at SXSW 2012 in Austin, TX in the QRO Concert Photo Gallery

Click here for photos of Best Coast at 2011 Escape To New York Festival in Southampton, NY in the QRO Concert Photo Gallery

Click here for photos of Best Coast at 2011 Sasquatch! Music Festival in George, WA in the QRO Concert Photo Gallery

Click here for photos of Best Coast at The Music Box in Los Angeles, CA on February 24th, 2011 in the QRO Concert Photo Gallery

Can anything be called ‘indie’ these days?  As long as it’s a current release, out on an independent label (and sometimes not even that), it seems that any style of music can be called ‘indie’.  Bethany Cosentino – a.k.a. Best Coast – became a major crush for indie boys the world over when she put out the sunny strums of debut Crazy For You.  Follow-up The Only Place still has sunny strums – even if that’s all that it has.

The Only Place does open well with the title track, a catchy tune in praise of Best Coast’s native Los Angeles.  But not only is that the peak of the record, but the rest is basically the same simple, sweet formula, to lack of effect.  Pieces happier (“Why I Cry”) or sadder (“Last Year”) are nice enough, but thin, and are basically one-woman girl-group songs from the fifties/early sixties.  Even the slight lo-fi garage echo of Crazy has been removed, making Place even less modern – or inspired.  When the most creative that the record gets is just a bit garage-y (“Do You Love Me Like You Used To”) or just a sunset by the beach (“Dreaming My Life”), that’s saying something.  And after “The Only Place”, the catchiest tune on the record, “Let’s Go Home”, feels a whole lot like “I Feel It All” by Feist (QRO live review) – and while “Feel” was a boppy & catchy song on an impressive and complex album (QRO review) by an impressive and complex artist, “Home” is just boppy & catchy.  And it sounds a whole lot like that Feist tune…

A modern record doesn’t have to reinvent the wheel to be a good one, or even a great one – but it needs to do something.  The Only Place is simply sweet – but it’s just sweetly simple.

MP3 Stream: “The Only Place“