Forty one years after the release of their self-titled debut album, Duran Duran is still going strong.... 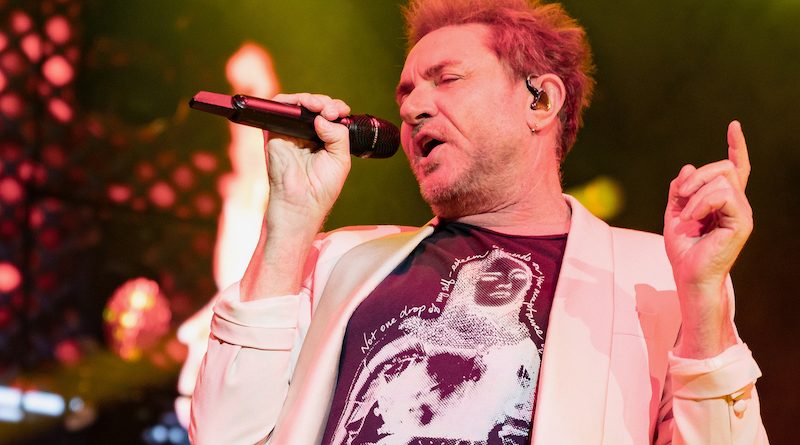 Forty one years after the release of their self-titled debut album, Duran Duran is still going strong. Besides their well-deserved election to the Rock and Roll Hall of Fame, they released their fifteen studio album Future Past, released last October. The record sounds very retro, a reminder of past records from the ‘80s and ‘90s, albeit the late eighties. Collaborations with Swedish pop sensation Tove Lo and Japanese band Chai keep things well grounded in the future. This year, they finally came over the pond to support their fantastic latest album.

This tour will be Duran Duran’s first in North America since their ‘Paper Gods’ Tour in 2019 and the Budweiser Stage in Toronto was the third (actually second since Minnesota was cancelled due to weather) of fourteen stops, on Monday, August 22nd. However, the weather traveled eastward, so the storms followed the band from Minnesota to Chicago to Toronto. After a quick DJ set, we were all expecting the show to start soon, but it was not to be. As the announcer asked those on the lawn to come under the amphitheatre’s cover, and when the water started to collect at the feet of the audience members in the first few rows and in front of the electronic equipment, we wondered how this was going to work. But after rain and lightning delayed the show for over 40 minutes, the venue finally announced that the show would resume, to everyone’s relief.

Opening for Duran Duran was legend and their long-time collaborator Nile Rodgers and his band Chic. I overheard someone ask if they were “that one hit wonder from the ‘70s.”  He had to be corrected. Not only have they had several hits, but Nile Rodgers has been a prolific producer who has collaborated with just about everyone you can imagine!!

While the members of Chic have changed over the years, their sound is still distinctive and the latest lead singers, Kimberly Davis and Audrey Martells, are fabulous. They’re still the fun band they’ve always been, and it was an honor to be photographing the legendary Nile Rodgers, rain be damned.

Click here for QRO’s review of Duran Duran at The Birmingham O2 Institute in Birmingham, U.K. on September 15th, 2021

As the opening notes of “Velvet Newton” sounded in the darkness, the members of Duran Duran entered the stage in pastel colored jackets and the crowd roared as Simon le Bon and John Taylor started shouting, “Wild Boys, Wild Boys!” into the microphone. After “Wild Boys”, they immediately went to another top hit “Hungry Like the Wolf”, before hitting us with two tracks from Future Past, “Invisible” and “Anniversary”. Throughout the evening, besides singing along the whole night, the crowd would sing whole lyric lines themselves, whether it was the “bop bop bop, bop bop bop bop bop” from “Planet Earth” or “girls on film” from, well, “Girls on Film”.

Le Bon introduced the band just before “Planet Earth”, including backup singers Anna Ross and Rachael O’Connor, saxophone player Simon Willescroft, guitarist Dominic Brown, drummer Roger Taylor (hiding behind his drum kit on a riser), the fabulous Nick Rhodes, and John “play that fucking bass” Taylor! Some outstanding highlights included “Come Undone”, featuring backup singer Anna Ross, “Give It All Up” featuring backup singer Rachael O’Connor, and “The Reflex” which was filmed at the Maple Leaf Gardens in there in Toronto!

The setlist did not really contain songs from throughout their career. The years from 1988 through 2020 were not recognized at all except for “Ordinary World” (which was fantastic and dedicated to the people of Ukraine) and “Come Undone” from their 1993 self-titled album, and their cover of “White Lines” from Thank You, their album of covers. That being said, there was nothing to complain about since 1981’s Duran Duran and 1982’s Rio are probably two of the best debut/sophomore one-two punches in history! However, there are tracks on some of the other records that are simply wonderful. It’s not clear that switching “White Lines” for one of their own tracks wouldn’t have been a great idea. An even better idea would be a longer set!!

After closing out the main set with “Girls On Film” interluding with a cover of Calvin Harris’s “Acceptable in the ‘80s” (maybe the video of “Girls on Film” was only acceptable in the ‘80s?), they came back with an encore of “Save a Prayer” and “Rio”. Not only did the audience sing along enthusiastically to “Rio”, but the backup singers were dancing around the stage, completely out of sync, just doing whatever felt good, which was the perfect thing to do!! It doesn’t matter that much of the music we heard this night was from forty years ago, Duran Duran should keep touring every year since they sound terrific and still put on an amazing show!

1. “Hold Back the Rain” was on the setlist but not played. Perhaps because they couldn’t hold back the rain? Rumor has it that it also wasn’t played at the Chicago show.

2. There were times when I felt like Roger Taylor’s drumming wasn’t in sync with the music. Perhaps it’s how electronic drums work because on other songs with the regular drum kit, it seemed fine. Or maybe it was just imaginations gone wild!

The Kooks – 10 Tracks To Echo In the Dark