<img src="http://www.qromag.com/wp-content/uploads/2011/06/granthartouevrevue.jpg" alt="Grant Hart : Ouevrevue" />While they're not the pieces most Grant Hart fans would have chosen, <i>Ouevrevue</i><span style="font-style: normal"> still shows off one of the most... 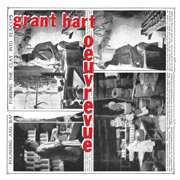 Grant Hart, the man who brought melody to punk, has always been a difficult figure to figure out.  He was one of the rare drummer/singers, in seminal eighties punk act Hüsker Dü (QRO spotlight on), sharing vocal duties with guitarist/singer Bob Mould (QRO live review) until the trio’s un-amicable split (he & Mould were also two of the first openly gay punk icons, though neither ever advertised the fact or did any Lance Bass/Ricky Martin-style full-press ‘coming out’).  His post-Hüsker career in the nineties included two solo records, along with two in his band Nova Mob in between (including a concept album about the destruction of Pompeii & NASA space program…).  Then he released almost now new material for ten years, until 2009’s Hot Wax (QRO review).  And now comes Ouevrevue, a somewhat oddly chosen collection of redone older songs, with a few covers, live, and unreleased material as well.  While they’re not the pieces most Hart fans would have chosen, Ouevrevue still shows off one of the most underrated figures in rock ‘n’ roll.

Long-working artists invariably prefer their newer material to their older stuff (just as long-time fans invariably prefer the older to the newer…), but Hart did take it to an extreme on Ouevrevue, with only two Hüsker pieces, and one, finisher “Wheels”, is a tech-spook new version of a very old song, a version that also closes Hot Wax.  The most-used record is 1994’s Nova Mob, his second and final with that band.  It was an overlooked album at the time, however, and Ouevrevue does help shine a light where it is needed, with more rockin’, possibly live versions of “Evergreen Memorial Drive”, “Shoot Your Way To Freedom”, “Little Miss Information”, “Beyond a Reasonable Doubt”, and “Please Don’t Ask”.  Though the final two are bit too rough and psych-guitar, none of them are unwelcome pieces.

Click here for coverage of Grant Hart at SXSW 2010 in Austin, TX in the QRO Concert Photo Gallery

And they’re less than a third of the sixteen-track collection.  There are two good-but-not-amazing covers (Willie Dixon’s “I Just Want To Make Love To You” and Bob Dylan’s “Masters of War”), while first Nova Mob album Last Days of Pompeii only has the rough “Persuaded” (no songs about volcanoes or rocket ships on Ouevrevue…).  The near-shanty “The Main” is the sole representative from Hart’s first post-Hüsker release, solo Intolerance, stripped down and made more meaningful to open this record.

“The Main” is followed by another stripped number (not the only time the track order leaves something to be desired – most of the Nova Mob songs are bunched together), “Signed D.C.”, a presumably new or unreleased piece of alt-folk.  While that works, other previously unrecorded songs are out of Hart’s wheelhouse – the random dark-funk bass of “Oh! To Behold”, the old-timey rock elegy “Ballad #19” (which was featured on the live Ecce Homo 1996 release), and the odd organ-like tones to “Khalid”.  Before “Khalid” comes the best track order of Ouevrevue, a brighter “No Promise Have I Made” – the other, and much more true-to-original, Hüsker piece – and “Narcissus, Narcissus”, from Hot Wax.

Almost entirely missing on Ouevrevue are any of the great Hüsker pieces that put Grant Hart on the map, the pure melody of Intolerance, or the compelling concepts of Pompeii – so most fans will be disappointed in the selection.  But you’ve got all those old records anyway (and are certainly easier to find than Ouevrevue, which seems to have only come out in Germany and the Netherlands…).

However, if you’re wondering what Hart’s been doing more recently, if he’s still ‘got it’, then Ouevrevue will nicely reassure you.

Cerulean Tapes – “When I Saw You”