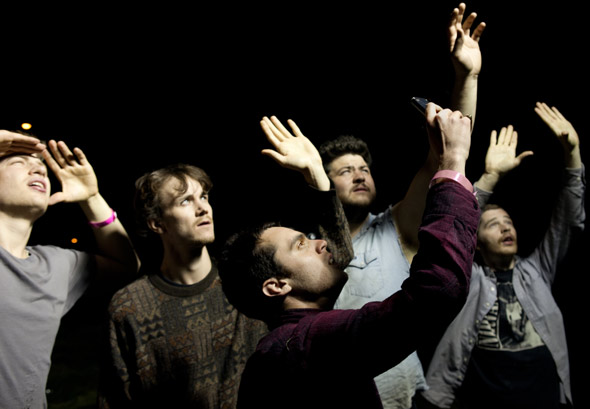 After playing the somewhat disappointing B.O.M.B. festival, Ian Felice of said Brothers talked to QRO.  In the conversation, the singer/guitarist discussed playing festivals (of all types), this year’s Celebration, Florida (QRO review), taking chicken coops & old high schools over recording studios, finding their drummer on the floor in Florida, losing a washboard somewhere along the way, drunken shouts from the crowd for "Whiskey In My Whiskey", and much more…

QRO: You’re playing a lot of festivals this summer, like B.O.M.B.  How does outdoor, festival shows differ from indoor, ‘regular’ shows?

IF: Personally, I don’t like it as much.  You don’t get a soundcheck, really.  We usually play during the day, and I don’t like starting when it’s bright out.  And you don’t get to play that long.  It’s not even a real show…

I don’t really enjoy playing festivals that much.  I’d rather play a show.  And I don’t like playing outside that much.

Sorry to be a bummer, man…

QRO: No worries.  You do play a lot of festivals, different types of festivals, from older folk ones to jam to alternative & mainstream.  Do you notice any difference in the crowds?

IF: Well, it’s hard to say, because I’m not that observant of the crowds – I’m kind of in my own space, and I generally don’t walk around in festivals that much, ‘cause I generally don’t feel comfortable in crowds.

But I’m sure that the demographic is different for different genres.  It’s usually just a young crowd, some might have tie-dyes on, listen to Phish…  It’s all good.

IF: I rather just do one show and move on.  I don’t like the whole déjà vu, of doing twice in a row.  I mean, we did play different shows on different nights – there’s a challenge to put on different shows, because I think there’s a lot of repeat people coming.  But I’d rather do one show and then pack it in, drive off to wherever we’re going next, instead of just sticking around, not doing anything.  I like to be on the move.

But sometimes the smaller rooms had a more intimate atmosphere that I like.

QRO: Do you at all miss playing the small places you once did, like Living Room (QRO venue review) back in 2007 – for tips?

IF: That was when we were just starting out – I don’t know… [laughs]

QRO: At every show, is there always at least one person drunkenly shouting for "Whiskey In My Whiskey"?

QRO: And why has that not been featured in a liquor ad?…

IF: [laughs] I don’t know – we haven’t gotten any offers.  We haven’t really pursued advertising; I’m sure if there was, we’d probably take it.

The Felice Brothers playing "Whiskey In My Whiskey" at Bell House in Brooklyn, NY on May 18th, 2011:

QRO: How hard is it to balance, live, the upbeat numbers like "Whiskey", with sadder and often much quieter fare?

IF: It depends on the crowd.  If they’re a talking, bar crowd, then, obviously, it’s harder to play the slower, quieter songs, and we end up just playing a whole bunch of fast, louder songs.  Even if we play the softer songs, [we play them] in a louder way.

If the crowd being responsive to different kind of things – we usually play off the crowd, sort of how the crowd reacts.

We like the dynamic of playing a really stripped-down kind of song, then doing something that’s more bombastic.

QRO: Celebration, Florida in particular is a more downbeat record – how hard is it to balance newer & older songs on the set list?

QRO: At least you don’t have the bigger songs, like "Whiskey"…

IF: There’s a couple on there that are kind of upbeat.

All of our records have songs that are slower, kind of more downbeat songs.  And there are ones that get more popular are the ones in the more ‘rock ‘n’ roll’ style…

But in a live setting?  It’s not hard – they all integrate very well.  We don’t really have a set way of playing; we just play off of each other, generally.  There’s a good cohesion.

QRO: Celebration seemed like you added some new – for lack of a better word – ‘tech’ elements, like mini-keyboards.  What brought that on?

IF: Well, we were touring for a long time, and we started to get other gear, incorporate it into songs.  And we wrote songs with that kind of instrumentation.

Just because it was new, kind of exciting – opened a different avenue for us, basically.  So we incorporated it.  It wasn’t really a ‘conscious’ decision – it just happened.

QRO: What was it like making a record without your brother Simon?

IF: We made another record the year before, put it out limited.

It wasn’t that much more different. We had to work on percussion together more, because [Simon] was the drummer, previously.  And our drummer was kind of ‘in training’ – wasn’t really up to snuff.  We had to make it a group effort to make percussion tracks.  That was probably the major difference.

It wasn’t that different, you know?…

QRO: You do seem to have now taken more of a consistent front role now, at least with vocals and live, as opposed to all the instrument & vocals switching that used to occur with the band.  How has that been?

QRO: Do new songs originate with you, does everybody bring new song material, or is it a group thing from the start?

IF: No, it starts with actual, written songs, written in private, by the songwriter, generally, brought to the band.  The band morphs it, somehow.

We don’t write together – it’s really, really hard.  I couldn’t do it – I get input and stuff, change the chords, but the inspiration is more personal.

QRO: Where did you find [new drummer] Dave Turbeville?

QRO: How come, in publicity materials at least, Christmas is always listed without a last name?

QRO: And what happened to Greg Furley’s "I Get Money" washboard?

IF: [laughs] Fallen down somewhere – your guess is as good as mine.  Could be in any state in America…

QRO: People without the name Felice now outnumber those with the name – anyone pushing for a vote on a name change?…

QRO: Also, do you think Greg is the only washboardist/violinist/mini-keyboardist out there?

QRO: Celebration was recorded in an old high school.  The Felice Brothers was made in a chicken coop.  What do you have against recording studios?

IF: They have stuff against us.  We’re poor…

Generally, we can’t record in a real recording studio.  The amount of time we work on stuff, it would just be extreme, way over budget.  We have all the gear we need to record by ourselves, so it makes no sense…  In a studio, you gotta clock in and out, you gotta pay by the day.  They charge like $1000 a day, a lot of money – we don’t got that!

We work in kind of a capricious way.  When we have time, when we’ve got a space, we need to be inspired – we don’t want some weird, sterile, crisp acoustic; we like different sounds – don’t like perfect sounds.

The Felice Brothers playing "Put Your Arms Around Me" at Bell House in Brooklyn, NY on May 18th, 2011:

QRO: At Bell House, Diamond Doves came on stage multiple times – and weren’t even playing that show!  Did that also happen when you were on tour?

QRO: Was it ever a too-tight fit, all eight or so of you on stage?

IF: Yeah, we play a lot of smaller stages.  We just kind of squeeze and jump on each other and stuff.  Climb on each other – we’ll fit.  Squeeze in and fit.  There wasn’t really a microphone set-up, generally more like a barn dance or something…

QRO: This fall/winter, you’ll be playing Europe – not just Britain, but Germany & the Low Countries.  Have you played the Continent much before?

IF: Yeah, we’ve played a lot in Germany.  Played pretty much every major city in Germany, and The Netherlands, Holland, Spain, Barcelona, Italy…  We’ve hit all of them, pretty much, except for France.  We’ve toured pretty extensively in Europe.

QRO: You’ve got such an ‘Americana’ sound – is it all odd playing in the Old World?

IF: Odd?  Oh, no – they’re like more receptive to that music that we make than America.  Our crowds are kind of bigger over there.  It’s not foreign, at all.

QRO: Does the open of "Frankie’s Gun" get a particularly big reception in "Chicago!"?

I mean, if you say the name of your town, everyone likes it.  I’m just gonna write a record with every town, every major city – you’re guaranteed a fan base in that city.

Like when we were playing Johnson City with Old Crow Medicine Show.  They have that "Wagon Wheel" song, says something about Johnson City; people go fuckin’ crazy… [laughs]

QRO: And what about, also in "Frankie’s Gun", line "I hurt him so damn bad / I had hide in Jersey" in Jersey?

IF: [laughs harder] Yeah, they love that.  Go crazy.  The girls – it’s like the British Invasion is in town.

QRO: Is there a "Cus’s Catskill Gym"?

IF: Yeah.  I grew up in Catskill; I went to the same high school my friends went to.  Cus’s Gym was the trainer across the street from the high school.  It was called ‘Cus’s Catskill Gym’.  But it’s not there anymore.

QRO: And was there a Pageant of "Fire At the Pageant", that had a fire at it?

IF: No, that’s metaphorical.

QRO: Live, do you still fit in traditionals/covers, like you did earlier in your career, such as "I’m Saved"?

IF: We used to do more of that stuff.  We have so many original songs of our own; we just play them.

QRO: You guys have certainly made & released a lot of songs.  Is it hard making a set list with so many options?

IF: We don’t make a set list all the time.  Other times we just go with the flow.

QRO: Are there any songs that you can’t play?

IF: Oh yeah, if I forgot how to play.

That "Gym" is fun to play.  It’s fun to yell, "Stay away from Don King" at an audience, people that are confused… [laughs]

IF: Yeah, "Hey Hey Revolver" a lot, there’s different versions of it.  "The Big Surprise", "Carrier Pigeon", "Murder by Mistletoe".  Even older songs, "Ballad of Lou [the Welterweight]", stuff like that.

The Felice Brothers playing "Love Me Tenderly" at Bell House in Brooklyn, NY on May 18th, 2011: