<img src="http://www.qromag.com/wp-content/uploads/2010/12/lessavyfavrootforruin.jpg" alt=" " />Great live band is working to hone their craft, if not quite all there yet. ... 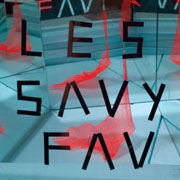 Being a great live band can often be a detriment to growing musically.  Fans of Les Savy Fav go to their shows first and foremost for the wild antics of singer Tim Harrington, and not as much for the musical stylings of the Rhode Island-by-way-of-Brooklyn act that helped kick-start the borough’s current wave of young party-rock acts.  2007’s Let’s Stay Friends (QRO review) was decent and catchy enough to fit the band’s mold, but didn’t show the kind of growth that one might have expected from of their first new album in six years.  Root For Ruin does show some sharp change for Les Savy Fav, a bit repetitive at times, and sometimes in some wrong ways, but definitely there.  Yet how does it play live?

There’s a sharper sound throughout Ruin, higher and more cutting, and less ‘fun’ than their prior work.  On record at least, it all comes together best when the band goes further into their new darkness, such as spookier “Sleepless In Silverlake”, or the distance and expanse making “Let’s Get Out of Here” and “Dear Crutches” more evocative.  However, the sharpness and distance are both mostly used just to hone, not to point.  This leaves the staccato sharp-punk “Appetites” and “Excess Energies” wearing a little thin.  The extra catch added to “Lips ‘n Stuff” works, but not so much the speed-guitar wankery behind “Dirty Knails” and “Calm Down”.  The restraint and effects on “High and Unhinged” is more interesting, but too distant on the preceding “Poltergeist”, and closer “Clear Spirits” is a weird, unnecessary tech-mess.

A band with as strong a live show as Les Savy Fav could have played it safe and rested on their laurels (indeed, that’s kind of how Let’s Stay Friends felt), so props are due to them for experimenting on Root For Ruin (it helps that bassist Syd Butler founded & runs their label, Frenchkiss).  How a crowd raised on the band’s live show will react to the new material remains an open question (whether on record or live).  The sharper sounds aren’t always used just right, and can dull with repeated use, but Root sees Les Savy Fav working to hone their craft.