It’s not like it was, and never will be, but it was great to get some ol’ fashioned rock n’ roll when Lucero came to Webster Hall... 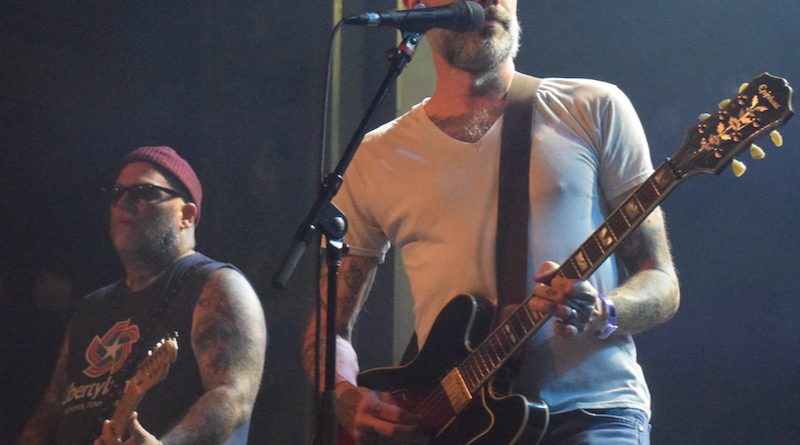 Click here for all of QRO’s coverage of Lucero in QRO’s ‘Spotlight On : Lucero’ feature

It’s been so long since we all were going shows. Yes, live music has come back, but it’s been tentative, first at socially distanced events, then mostly outdoors in the late summer/early fall, more festivals and free shows than in da club. But as the weather slowly turns (ever slower into fall, every year) and vaccine rates crawl towards herd immunity, music-lovers are stepping their toes into indoor venues, even as they show their vaccine card alongside ID to enter (clubs are ironically well-suited to this new normal, already having someone who would check your papers). It’s not like it was, and never will be, but it was great to get some ol’ fashioned rock n’ roll when Lucero came to Webster Hall in New York City on Friday night, October 15th.

The Memphis-born band have long been able to draw a wide fan base, their alt-country/rock appealing to everyone from alt-hipsters to country fellas to head-banging rockers, and have a deep discography of over 20 years. While the tour is off of this year’s When You Found Me (QRO review), this was a set list from across their records, all the way back to their 2001 self-titled release. New songs were Found, such as early on with “Good As Gone” and the new album’s opener “Have You Lost Your Way”, which frontman Ben Nichols (QRO interview) described as starting as a fairy tale, but going dark, indicating inspiration from his kid daughter, who drew a picture of her grandpa – with a chainsaw. “We’re raising a little psychopath…”

Nichols was in particularly good spirits, clearly happy to be back on the road, opening the show by saying, “It’s been forever!” He also thanked opener Morgan Wade (QRO photos) at the start, a classy move, joking that she would soon be too big to play ‘small’ places like Webster Hall (QRO venue review) anymore. When whoever was running the lights heard the disco ball reference in old number “Slow Dancing”, it came out & on, and while Lucero aren’t your classic disco ball band, Nichols just smiled and said, “That’s a really good disco ball,” adding after the piece, “I don’t think we have any other songs that mention disco balls, but feel free to bring it out…” He wryly reminisced about, “back in the day,” playing Brooklyn’s tiny & usually free Pete’s Candy Store (QRO venue review) – before “Texas & Tennessee”. Describing the title track of 2015’s Among the Ghosts (QRO review), he said it was about missing his family while on tour – but he’d just been at home for two years, and right now his family was doing just fine without him. Before another killer song about his family & home, now in wife’s home state “Back in Ohio”, he described the Buckeye State as, “The least romantic of the 50 fucking states…” Ben even referenced recently working with his brother (on the short film for “A Long Way Back Home”), filmmaker Jeff Nichols (Loving, Midnight Special), and that Jeff’s next movie might be shot in NYC, “But I’ll stop talking, cause I’m drunk…”

When asked about his taste in whiskey, he admitted to not having his first sip until age 19, “Pretty old” – with which keyboardist Rick Steff held up seven fingers to (presumably) indicate that he had been seventeen, but Nichols just responded, “You were seven…” (and Nichols was indeed given a shot after the song). Indeed, the whole band was in good spirits of all kinds, such as bassist John C. Studdlefield throwing up metal horns and asking for fans to raise their glasses.

But the good spirits didn’t mean that Lucero shirked the sad & shadowed songs, such as Found’s “Way” and “Coffin Nails”, or the slow touch of “Pull Me Close Don’t Let Go”. There was the classic “The War” detailing being sent off to WWII (through “a port of New York” to cheers), just Nichols with Steff on accordion, and then just Nichols for “Loving”. And the encore return was Lucero’s “Drink ‘Till We’re Gone”, before his carrying “lullaby,” “When You Found Me”.

With such a back catalog of songs, there were going to be songs that you wished you heard over some that you did, even for longtime fans. One fan who’d been at the show the night before in Holyoke and had said she’d be there this night got her request for “Baby Don’t You Want Me” filled (though when some fans this night shouted some requests or something, Nichols admitted, “I’ve been doing this for so long, I’m deaf…”). But the diversity (ten albums covered in about 25 songs) was a reward for those who had been waiting so long to see them. Also a reward? Nichols coming out afterwards to sign posters and give out set lists.

Going back to shows is going to take some getting used to – forget worrying about vaccine mandates, can we talk about drink prices? Have gotten used to livestream’s cheap drinks (at home…). But it was great to get out there again with Lucero.