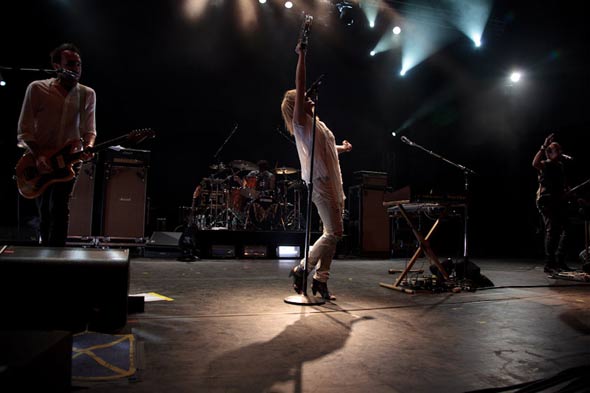 The summer of 2010 has been a blessed one for New York concertgoers, as there’s been a host of great shows outdoors & for free, but the first week in August was particularly stocked.  The weekend of July 31st & August 1st had Sonic Youth at Prospect Park Bandshell (QRO venue review) and St. Vincent at Central Park SummerStage (QRO venue review), while the following weekend had Sharon Jones & The Dap-Kings at Prospect Park, The xx at SummerStage, and Cut Copy at Williamsburg Waterfront (QRO venue review).  But the best show of the week wasn’t on a weekend, but a weekday – Metric playing Prospect Park in Brooklyn on Thursday, August 5th for Celebrate Brooklyn!.

First thing the Metric show had over the rest?  No massive crowd or lines.  Unlike the Prospect Park shows just before like Sonic Youth (QRO photos) or The Swell Season (QRO photos), or Cut Copy (QRO photos) or The xx (QRO photos) shows at other places right after, there wasn’t a huge bag-check line to get into the Bandshell (just had to get around the people at the gate asking for three dollar donations, which could be frustrating if there was someone stopped at each entry line – the money one spent on beer is ‘donation’ enough…), and the park never hit capacity, leaving some fans outside, and meaning no leave-and-come-back.  The relative early hour (6:00 PM gates) on a Thursday, plus some people thinking there were going to be big crowds after the Sonic Youth & Swell Season shows and so staying away, seemed to keep Prospect Park from getting overfull – but it was still a healthy turnout. 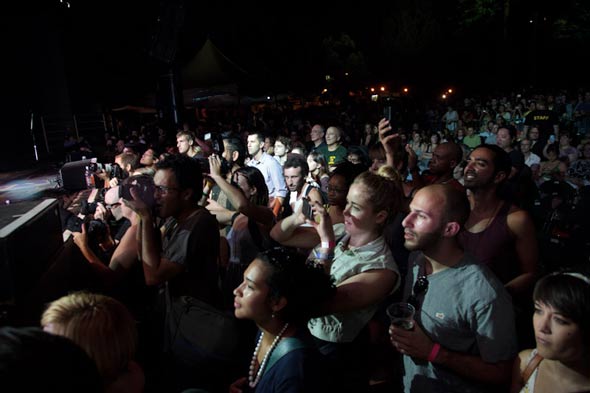 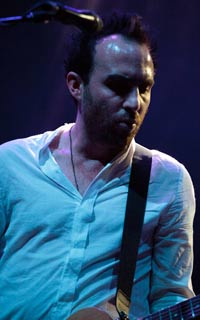 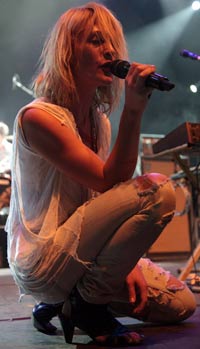 And a young, good-looking turnout at that.  Metric’s always had a good-looking crowd, thanks to their own good looks, nowhere more so than stunning frontwoman Emily Haines (QRO solo album review), and their girl-power has always been inflected with ‘the right to look right’, getting not just comely lasses but also the good-looking gay guys (both of which NYC, in particular, has in spades…).  The band’s rise to the next level of stardom with last year’s Fantasies (QRO review) brought them more fans outside of the indie sub-circle, but they took another step up this year when they 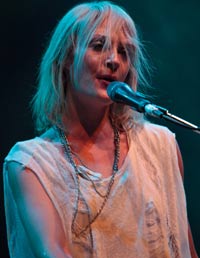 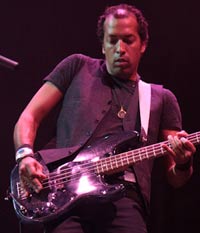 track to the Twilight: Eclipse soundtrack (QRO review), “Eclipse: All Yours”.  Last year’s soundtrack to Twilight: New Moon (QRO review) brought new ears to loads of indie acts, especially Death Cab for Cutie (QRO album review) with that record’s single/lead-off track, “Meet Me On the Equinox”, and while the Eclipse soundtrack isn’t as indie-heavy (and more infected by the film/book series’ overwrought nature), it still gave 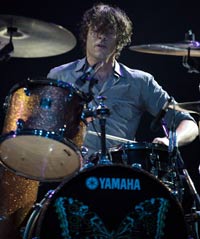 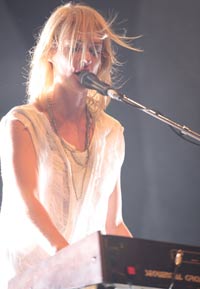 Metric a chance to shine even brighter.  It also brought a lot of younger, Twilight-age fans to the band, and a free, all-ages show, early on a summer evening like this was bound to round them up like nobody’s business.

Yet Metric didn’t play “Eclipse”, but instead started with a brand-new song, “Black Sheep”.  A bit darker & grander for the band, those hipsters who knew that Metric had a song on Eclipse, but didn’t actually know the

song, would be forgiven for thinking that the unfamiliar first 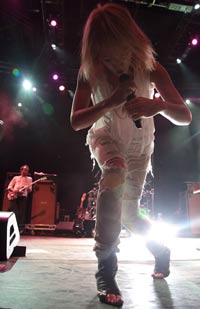 piece was their contribution to the soundtrack.  But it wasn’t, so why did Metric lead off with it?  Instead, the show didn’t really kick into gear until the following “Satellite Mind” from Fantasies – but the new song was the only poor song choice of the night (and bands have to live-test their new songs at some point…).  Now a year-plus removed from the release of Fantasies, Metric can indulge a bit more in their previous records, and both 2005’s Live It Out and 2003’s Old World Underground, Where Are You Now? got a pair of songs each, mostly in the back-end of the show.  “Satellite Mind” and Fantasies‘s “Help I’m Alive” saw Haines do numerous ‘come to the lip of the stage and kneel’, while Live It Out‘s “Empty” segued into 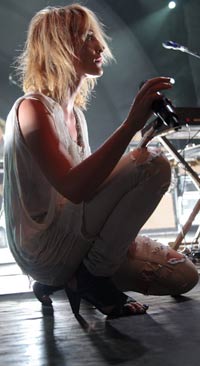 the chorus to the Beastie Boys classic, “You’ve Gotta Fight For Your Right To Party”, as well as the blonde doing her trademark twist (otherwise reserved for Grow Up‘s “The Twist”).

When Haines came to the lip of the stage, she came close to the audience – very close, in fact.  Unlike at paid shows at Prospect Park (such as The Dead Weather there two nights before – QRO photos), there is no photo pit at the free shows at the Bandshell.  Instead, folding chairs are laid out in the main stage floor area, with about five feet between the front-most chair and the stage, which itself is only four or five feet off the ground.  That area up front was swamped from the get-go, and while this led to photog complaints during the first three songs (when they were shooting), no one else was complaining at being able to get that close to Metric.  The front ten or so rows of chairs at a free show are barriered off from the rest of the seats, with entry only for press or VIPs, so not all of the fans who wanted to get that close did, but the VIPs seemed to bring their kids to the show, as it was the youngsters largely who swarmed the front area.

Even with the early start time & on-time running time, two openers (first Holly Miranda – QRO photos – then Joan As Policewoman – QRO photos), plus a 10:00 PM or so park Bandshell curfew, meant that Metric unfortunately couldn’t play an extended set.  However, they still hit up the best songs from Fantasies, including also “Gold Gun Girls” (which got Prospect Park’s girls a-rockin’), “Gimme Sympathy”, “Sick Muse” (those three in a row), and “Stadium Love” – which Haines prefaced by saying, “It’s not ‘Stadium Love’, nay – I love saying, ‘nay’ – nay, it is a park, and we have ‘Stadium Prospect Park love’!”  And if they missed a few old Live It Out greats (okay, no “Handshakes”, but no “Poster of a Girl” for the girls?), Metric returned from their encore break with “Monster Hospital”, and did both of Old World‘s best, “Dead Disco” and, closing out the night, “Combat Baby”.

After the Wall Street economic crisis of 2008/2009, the summer of last year was a weak one for not only 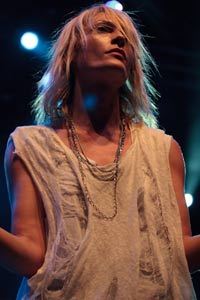 America’s festivals in general (QRO 2009 Festival Guide), but also NYC’s free concert season (QRO 2009 NYC Show Preview) – however, just as this year has been a major bounce back for the North American festival circuit (QRO 2010 Festival Guide), it has also been a rebound for all the free, outdoor shows in the Big Apple (QRO 2010 NYC Show Preview).  But Metric still managed to shine the brightest, not over-packed like The xx or Cut Copy the weekend after, and Sonic Youth the weekend before was Ibold-less (if you can all that ‘Sonic Youth’ – he was in Montreal that day for Osheaga with his ‘other band’, Pavement; Sonic Youth rejoined him there for Day Two of the festival, which Metric also played – QRO photos).  And though some other places may be sick of the season by now (such as Moscow, Pakistan…), NYC wishes the summer could never end… 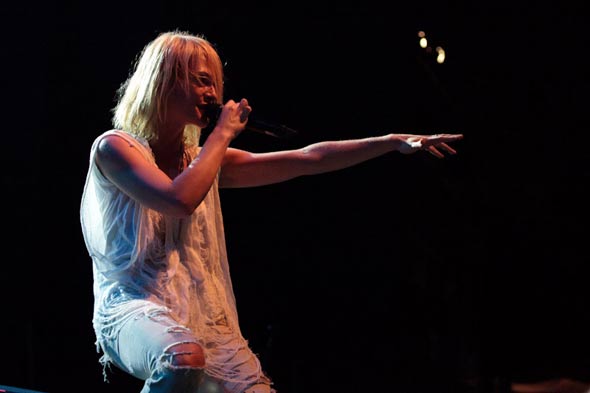