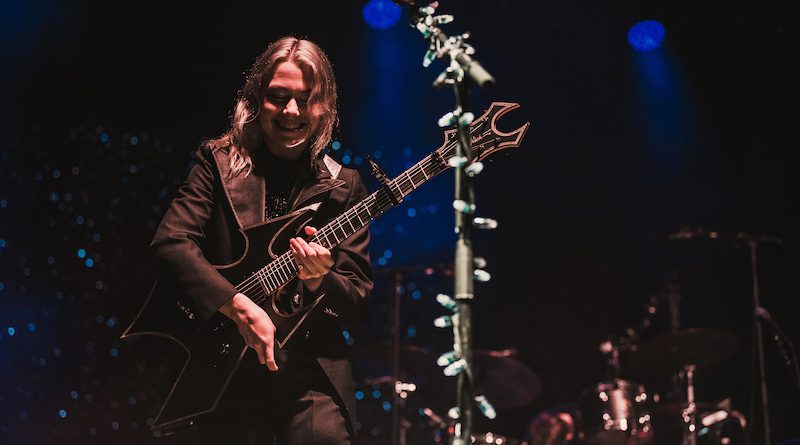 Click here for photos of Phoebe Bridgers at 2021 Shaky Knees in Atlanta, GA in the QRO Concert Photo Gallery

Click here for photos of Phoebe Bridgers at 2021 Pitchfork Festival in Chicago, IL in the QRO Concert Photo Gallery

On Tuesday, May 24th, indie rock artist Phoebe Bridgers paid Tampa Bay a visit at The Cuban Club in Ybor City. Making her reappearance after her last performance in 2017, the sold-out show was filled from corner to corner at the outdoor stage of the venue, with many fans having arrived as early as 4 a.m. to stake out a spot in the line. As the doors opened, the young fans began to immediately sprint to the front row, screaming and cheering long before she even took the stage.

Hickey kicked off the night as fans had already crowded to the stage in the hot and humid Florida air. As he took to the stage, the crowd of young fans yelled out and cheered, with many singing along to each song. For a brief moment, Hickey paused his performance to get attention to a young fan who was suffering from the heat and humidity. Hickey played a short opening set, featuring his songs from the latest album, before giving it up for Bridgers and heading off the stage.

As the crowd began to pack in tighter, the stage was set for Bridgers’ performance. Hailing from Pasadena, California, Bridgers’ solo career kicked off in 2017 with the release of her debut studio album Stranger in the Alps, which gained critical acclaim. She released her second album, Punisher (QRO review), in 2020, which garnered her even more success in her career.

As her set was about to begin, Bridgers and her accompanying band took to the stage as Disturbed’s “Down with the Sickness” played in the background. Quickly moving to the mic, Bridgers started into “Motion Sickness” from her debut album, as thousands of fans screamed at the top of their longs, but immediately shifted into singing along with her. Bridgers then continued her opening set with several songs from her 2020 album, including a top hit from the album, “Kyoto”.

As Bridgers performed, many fans who were unable to get a ticket could be seen in the neighboring parking garage, watching from the stairs and from their cars, all singing along and cheering.

Later on in her performance, Bridgers invited Hickey back onto stage to perform “Chinese Satellite” with her, with both musicians singing along in unison. As the night went on, Bridgers, just like Hickey, paused several times to help fans struggling with the temperatures and helped get the crowd to clear paths for emergency responders to assist.

Towards the end of her set, Bridgers took a moment to speak on political issues, specifically Florida’s “Don’t Say Gay” bill, and ending her statement with a simple phrase:

As Bridgers closed out her set, she briefly disappeared off the side of the stage, only to return shortly to finish with an encore of “Me & My Dog”, a song she wrote with fellow artists Julien Baker and Lucy Dacus for their supergroup, boygenius.

As the show came to its end, the fans continued to cheer long after Bridgers had left the venue, with many fans still staying behind talking and hoping to catch a moment with her. As the venue began to usher out the young fans, many began to crowd at the merch table while others headed off to the streets and sidewalks to spend a last few minutes by the venue, looking back over videos and pictures on their phones, and reminiscing already about the show. Although the night was dreadfully hot and humid, Bridgers and her fans stayed strong through the evening, bringing about a new energy, and even gracing some fans with the first concerts of their lives. After this night, Bridgers will always find a welcoming crowd, eagerly awaiting her return to the city.