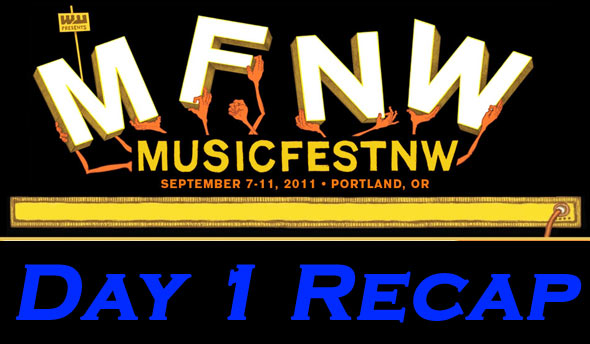 Wednesday, September 7th beckoned the first night of Music Fest Northwest, where many indie folkers, psychedelic lovers, and electronic music munchers would fill Portland, Oregon clubs for debauchery, booty shaking and good old-fashioned music listening.  The first night had a few, yet strong line-up, and I gladly chose to head over to the Crystal Ballroom for The Kills, Eleanor Friedberger, and Mini Mansions.

Entering the gorgeously painted Sixteenth Chapel-esque venue, Mini Mansions had already started to play.  I headed straight for the stage where each listener was fed well by airy pop sounds that moved into explosive surges, which gave at times a faint reminder of Modest Mouse (QRO photos at MFNW 2009).  Aesthetically, the band looked great aligning themselves horizontally on stage with Zach Dowes centered, billowing on the drums.  Bass player Michael Shumen (on a break from Queens of the Stone Age) is a highlight to see live as he plunges into the depths of his bass, creating a new level of abstract sound.  Hearing Mini Mansions live versus recorded is almost a completely different experience; their classical songs intertwining with raucous breakdowns come to a whole new form of life.

By the time Mini Mansions was nearing their set, the Crystal Ballroom was filling up, and any audience member with a wristband taking a cigarette or fresh air break had to wait outside in another line for re-entry.  The rule for venues hosting the festival was, when they reached capacity one person would be allowed in as one person was heading out.  This meant that if you bought individual tickets you were promised entry/re-entry, but if you had a wristband there would be no guarantees. 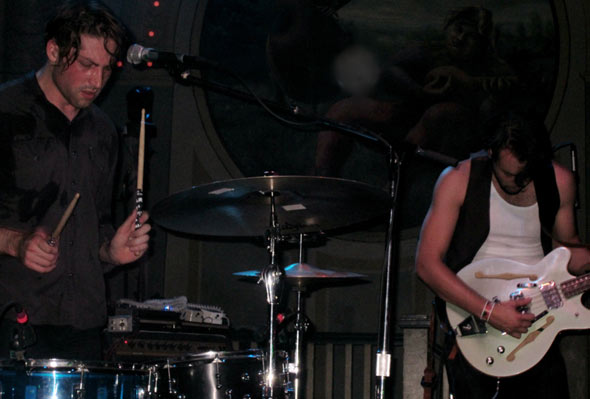 Click here for photos of Eleanor Friedberger three days later at The Wiltern in Los Angeles, CA in the QRO Concert Photo Gallery

Next on the lineup was Eleanor Friedberger, who has taken a slightly different track from Fiery Furnaces (QRO photos) with her solo project.  As she and her three-piece band entered the stage, a hint of lightness and bubble gum pop filled the air; pink and yellow lights beamed on the musicians as listeners nodded their heads with rapport.  Friedberger played a smooth set, and her brass voice carried strong through songs like “My Mistakes” and “I Won’t Fall Apart On You”.

After two very different sets from two very different bands, it was time for The Kills to grace the stage with their massive presence.  Vocalist and guitar player Allison Mosshart came prowling on stage like a lioness as she whipped her pink locks to and fro, vigorously thrusting her body about.  The Kills played many songs off of their latest album Blood Pressure (QRO review), a highlight being “The Heart is a Beating Drum”, which had every audience member pouring in sweat and gyrating to each electric-filled breakdown.  Guitarist Jamie Hince and Mosshart make a dynamic duo, feeding off each other in such an intense way that seeing them live would make anyone a fan.

As the band came to the end of their set, no one was ready to see them go, which induced an uproar of cheers in order to summon them back, and summon them back we did.  The Kills ironically enough began their encore set with their romantic waltz “The Last Good Goodbye”, which brought some listeners to tears.  The dangerously heated duo carried the energy back up with the steady drumbeat of “Pots and Pans”, and ended their set heavily with “Fried My Little Brains”, off their EP Fried My Little Brains.  Personally, I ended the night completely drenched in sweat and satisfied with the brilliantly fired up kick off to Music Fest Northwest – The Kills are a force to be reckoned with!